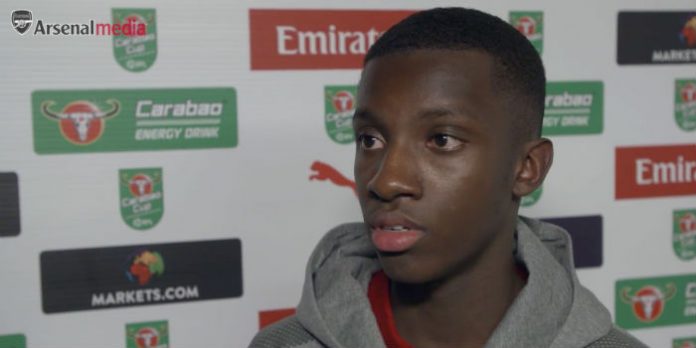 Eddie Nketiah has thanked Arsene Wenger for the opportunity to strut his stuff in the Arsenal first team and revealed he dreams of emulating a trio of club legends.

The 18-year-old had the Emirates Stadium in raptures last night when he came off the bench on 85 minutes to score a winning brace, including a goal with his first touch, as the Gunners beat Norwich City 2-1 in the Carabao Cup.

Speaking after his dream home debut, the striker revealed his boyhood affection for the club and some of its previous maestros, including Thierry Henry, under whom he played at Academy level.

“I’m just thankful for the boss for giving me that opportunity to play and show what I can do – it’s a dream come true for me to get on and score not just one, but two goals to win us the game,” he told Arsenal Player.

“That’s the most important thing and I’m just thankful for all the fans for the support they gave me, it’s great. I’m a childhood fan of the club, so for the fans to get behind me like that is a dream come true, I’m delighted and grateful.

“It’s overwhelming [to hear the fans singing my name], but you have to remember you’re here for a job and try to stay focused on the game… but it’s a great feeling.

“[I grew up watching] Thierry, Dennis Bergkamp, Ian Wright – they were all great strikers and attacking players and I watched them a lot, especially Thierry.

“When he was working with us [at the club] I used to work with him quite a bit on and off the field, so I’m just trying to emulate even a little bit of what they can do, that would a dream come true for me.”

You can watch a video of Eddie talking here. Given the excitement of the occasion, it’s amazing he’s able to speak so level-headedly about what just happened. Best of luck to him in the coming months, no doubt he’ll be eyeing further game time in the Carabao Cup and the Europa League.

I hope he is like Harry Kane in that he didn’t support the club he was at when a kid, moved to the club he did and scores lots of goals.

But otherwise I don’t want him to be like Harry Kane.

The thing that needs to happen now is that Eddie gets a starting place against Red Star and perhaps a substitute appearance in the Prem. Last season we had some incredible performances in the league cup from the likes of Perez, Ox and Iwobi, only for them to be totally disregarded by Wenger who ignored them until the next cup tie. Unless the carrot is there, these players are going to find it hard to believe that good cup performances can translate to breakthrough seasons. Oh and play Reiss in his actually position from time to time, for the love… Read more »

Where did Eddie play last night? I think he did pretty well out of position if he was RWB don’t you think? Most of the time Perez was should have gotten an opportunity he ended getting hurt. Great timing. Where was OX or Iwobi suppose to play last season when Arsenal was doing pretty good? I know most of us think Walcotts time should be over at Arsenal but he was in great form at the beginning of the season. Iwobi for Ozil or Sanchez spot last season? Iwobi was very inconsistent when given the opportunity last season with the… Read more »

Or, let him learn his trade in the Carabao Cup.

Sure, let’s let him ‘learn his trade’ in the league cup for 2 maybe 3 more games every three weeks or so. Then let’s pop him on loan, probably to a struggling championship team. Repeat this until he’s 21 and then he can leave on an undisclosed to Genk. That’s how we do talent these days. Or we could actually let him play football ala Cesc, Cashley, Kolo, Thierry … all our breakthrough players.

a) Completely agree with your point about Perez et al last year but those were experienced players, that would be way too much too soon for young frail Eddie.
b) All due respect to Reiss Nelson, he ain’t Cesc.

Patience son, these lads will get plenty more chances to develop.

I’ve seen him close his mouth, so he’s not like Harry kane.

I just had the same thought

This kid is going to spend the next decade tormenting defences and making grown men weep. Serious attitude.

The thing that needs to happen now is that Eddie gets a starting place against Red Star and perhaps a substitute appearance in the Prem. Last season we had some incredible performances in the league cup from the likes of Perez, Ox and Iwobi, only for them to be totally disregarded by Wenger who ignored them until the next cup tie. Unless the carrot is there, these players are going to find it hard to believe that good cup performances can translate to breakthrough seasons. Oh and play Reiss in his actually position from time to time, for the love… Read more »

Cheers, just highlight the text, click copy and you can do it too! Nah, sorry bout that. Had terrible connection and thought it had disappeared so reposted.

A P
Reply to  Mein Bergkampf

Reading your opinion once is more than enough. Thanks.

Mein Bergkampf
Reply to  A P

My opinions actually get better and more salient the more you read them, a lot like a fine wine. You should feel blessed, people with your kind of disturbingly low intellect should always get a second chance to absorb important information. Every day’s a school day pal.

Actually more like a glass of Thunderbird with a meths top.

Next week Wenger will have him playing in the back three.

Part of the renowned education he says.

He wasn’t even born when Wrighty was playing for us 😀

What a way to make an introduction to the world! I think he’s moved ahead of Akpom in the pecking order now. Surely he’ll get more chances in the Carabao Cup, Europa League once we’ve topped the group, and early rounds of the FA Cup. This is a good season to be an Arsenal youth player.

Why not ahead of RN? One thing I noticed when Eddie came on was that he was aggressive. It seems like RN thinks too much when he’s out there. OF course it could be because he is unfamiliar with his position he’s playing but Eddie came on for him right? Maybe RN should come off the bench in the next EL match to give him another perspective

I used to dream of scoring for Arsenal too, when I was younger. Now I’d be pleased to make a five-minute cameo off the bench for Rushden and Diamonds in a preseason friendly.

When describing the second goal Wenger said ” he’s not tall but he got very high”…. so are they smoking weed on the sidelines now? Is this a new tactic?

Expect a newspaper to say that ‘According to a source close to the club, the technical area at the emirates stadium reeks of weed’…

Walcott could use some of that, maybe it would keep him onside.

Jesus! We don’t want anything that will make The MORE docile, FFS!

Damn these doped up athletes!

I’ve played sunday league high a few times. When I was off the ball everything went really fast, and running was exhausting (not that it isn’t when I’m sober), but with the ball on my feet everything was like slowmotion (not that it isn’t when I’m sober, it’s fucking sunday league football). I did however have a better first touch and passing (esp long balls) was quite good.

Lack of Perspective
Reply to  bendtnerschristmastree

Try getting a bit fitter, then get stoned and play … then you’ll be the new Eddie the Eagle of the Sunday League. Or you will think you are.

Short people can get high … short people now have reason to live.
When Eddie said he didn’t like his teddy I knew he was a real-good kid …

I’ll have some of whatever he’s taking…..

He took the ball to the corners in the dying minutes too…like a seasoned pro. Seems to have a good head on his shoulders

Important thing is not to over hype the lad and not be expecting regular starts for some time or fans calling for the same. Let the boy develop. Amazing night for Eddie, but would be good to see him go out on loan and see what he can do in the championship (don’t think too many premier league teams would take the punt to start him right now) and further his development. No point sticking around with that talent to get the occasional 5 minutes in the league cup.

Who was the last player we put out on loan that did well and came back into the squad in a regular rotation spot? Not Coq, he got an opportunity due to injury not because he had a successful loan spell. If Eddie is good enough to play for Arsenal, he should continue his training at Arsenal around quality players. It’s pointless IMO to loan players out to a Championship side to train with lessor players and a system doesn’t doesn’t reflect Arsenal’s style of play.

He grew up watching Ian Wright?! Haha! Wrighty left Arsenal in 1998 before Nketiah was even born! This makes me laugh and also very depressed as I feel ancient now!!

I loved & watched Pele even though I wasn’t born when he started or at his peak. Isn’t there recorded tapes of matches of your favourite team?

He was 7 when Bergkamp left…..yes you’re old

I’m surprised we haven’t had some comments complaining that as he’s a centre forward he should never have been played out of position whilst OG was on the pitch. What does the manager think he’s doing… 😀

Lol I felt watching Eddie his confidence didn’t seem high playing out of position. I wonder if he will recover from last night?

Last night was lovely. As Blogs has said elsewhere, it put a gloss on what was a pretty turgid game and made the late journey home all worthwhile. I personally like the fact that we give the youngsters a run-out in the League Cup and we’ve developed some really good players in it as a consequence. As a Gooner who grew up in the era of Rocky, Adams, Merson, Thomas etc there is nothing more pleasing than a homegrown talent making an impact. Nketiah has been highly-regarded at the club for quite a while and, at 18, whilst we should… Read more »

The jury is still out IRO Akpom (although he’s running out of time quick), but Afobe was affected by a couple of serious injuries more than anything else.

Akpom I can’t remember him ever being effective on the Sr team? Some players have it some don’t.

He’s had the odd ‘flash’ of talent but it was in his first few games which weren’t (IIRC) competitive matches. Although he doesn’t look like a bad player, just not yet good enough for the PL.
I think he’ll have to make an impact this season (here or on loan) or he’ll be looking for another club next season.

That leap though! Even more aesthetic than the original Eddie the Eagle

i don’t think we should call him that

I think Ian wright left arsenal before you were born, Eddie

Nobody is mentioning the fact that he was a Chelsea player, and they released him at U-14 stage – and we snapped him up!
Up yours Mourinho! I sense this guy tormenting botha Manure and Chelsea in the future 🙂

Eddie’s only 18 but he speaks so eloquently. I hope he makes it with us. All the best to you boy.