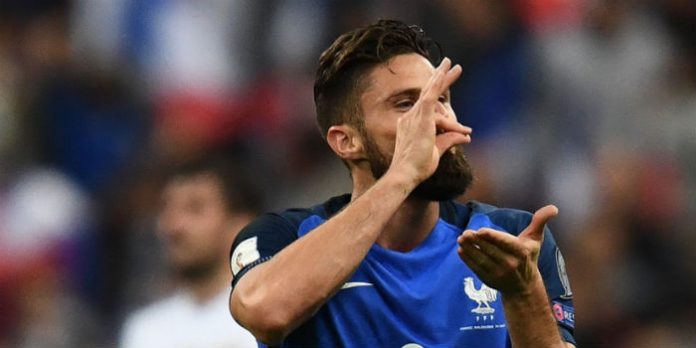 Arsene Wenger was dealt an injury worry today after Olivier Giroud was ruled out of France’s friendly with Germany.

The 31 year old picked up a thigh strain during the 2-0 win over Wales on Friday night, a game in which the Arsenal man scored, making him the seventh highest goalscorer in France’s history.

It was his 29th goal for his country, leaving him only behind the legendary Jean Pierre Papin and Just Fontaine.

Thierry Henry is the all-time leading scorer with 51, followed by Michel Platini with 41, David Trezeguet with 34, and Zinedine Zidane and Pascal Cygan both on 31.

It remains to be seen how serious the problem is, and he’ll return to London for treatment but clearly there’ll be doubts about whether or not he’ll be fit for next weekend’s North London derby.

Eddie Nketiah scoring a 92 minute winner with his first touch after coming on from the bench confirmed.

Stupid phone!
Although Pascal Dugan does have a nice ring to it

That Zidane whoever he is deserves to be nowhere near that legendary bald hero known as Pascal Cygan. Also get better soon HFB!!!

From Wikipedia:
Pascal Cygan (born 29 April 1974) is a French retired footballer. His favoured position was central defender, but he could also play as a left back.
After starting out at Lille in his country, Cygan would play four years in the Premier League with Arsenal and three in La Liga with Villarreal, in a 17-year professional career. He scored 31 goals for his national team.

It must be true then

From Wikipedia: Pascal Cygan (born 29 April 1974) is a French retired footballer. His favoured position was central defender, but he could also play as a left back. After starting out at Lille in his country, Cygan would play four years in the Premier League with Arsenal and three in La Liga with Villarreal, in a 17-year professional career. He scored 31 goals for his national team. In recognition of his place in French footballing history, a time capsule containing digitised recordings of his goals, a book of his most famous quotes, along with a sample of his DNA was… Read more »

Is it the number of goals against hé was directly responsible for?

I hope you are not accusing me of adding the last sentence in myself!!?

He had a full head of hair before he started nodding the goals in.

Sorry i thought we were talking about Alan Shearer

Jeez imagine how much brain damage Michael Owen must have

Could never gauge the importance of giroud. Scores important goals although it’s pretty much clear that he can’t win us the titles

Would make a good sun headline

That was the gag.

Clearly you’re in the wrong job

And I’ll bet everyone knows who has scored more goals for Switzerland than (almost) anyone. Yes! Another bald defender!

It is better giroud is injured so he would not be part of the Arsenal team. Giroud is one of those players that doesn’t deserve putting on the Arsenal shirt.

You must be one of those annoying FIFA fanboys who crave all the time about pace. The HFB is a Puskas award winner, international starter for the France national team ahead of Lacazette and Mbappe, scored 100 goals for Arsenal, is one of the highest goal-scorers for his country, routinely scored some beautiful goals for us and decided to stay with us instead of jumping ship to Everton where he could have definitely played twice as much as he is playing currently. If all that still can’t change your mind about Giroud, you can keep looking through Facebook comments trying… Read more »

Giroud is one of the only players that deserves putting on the arsenal shirt. Model professional, every time he was faced with pressure from the media or fans, always responds with the right attitude.

You don’t deserve to call yourself an Arsenal *SUPPORTER*

And, he is very handsome.

First time in the arse(s) Wouldn’t wish injury on anyone…but it might mean Lacazzette plays the full 90 for once!

I feel he won’t be with us after nest summer. At 31yrs, he has still a bit left in the tank considering his game has never been about pace. Either a move back to France (Marseille say) or to Italy seems likely to capitalise on what remaining time in career he has. The slower Italian league may suit him and the Italian teams are trying to regain some of their lustre may benefit from him. 6 goals shy of Platini, he still has a bit of time left to try and achieve that. He’s a player that strives to improve… Read more »

We’d do well to also plan ahead for the likely replacements for a number of players now getting older. Frankly I thought Per would have left last season following the FA cup win. Instead Wenger and company muddled themselves first getting rid of the improving Gabriel before Holding was fully baked and then also conspiring to get rid of oen of our better defenders in Mustafi. Bearing in mind BOTH Koscielny and Monreal are also getting up their in age, defense will need a bit of a shake up. Nor have Holding or Chambers yet to fully convince. Also we… Read more »

Simply put, we have to replace about half of the current squad by next summer. And knowing our club, we’ll probably end up replacing none. And continue to struggle the next season and the season after that.

Pascal Cygan is a legend from Arsenal.

Pascal Cygan. The opposite Samson of his time.