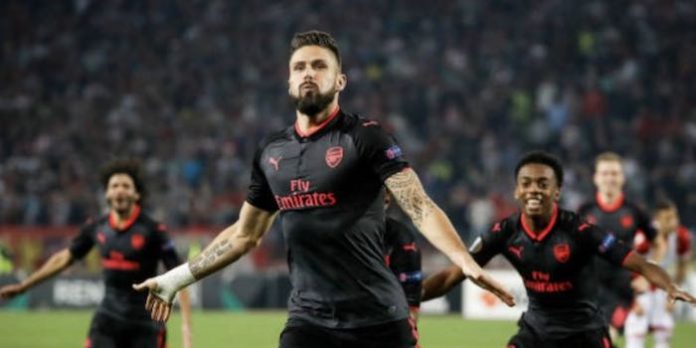 Olivier Giroud says the mutual trust he shares with Arsene Wenger is reason enough to be happy at Arsenal even though he’s not played much in the Premier League.

Seemingly buoyed by the fact that Didier Deschamps still sees him as a starter for France, perhaps unsurprising given he’s scored 15 goals in his last 22 games for his country, the 31-year-old touched on why he still thinks he made the right decision to stay at the Emirates this summer.

“I am not questioning myself about my future,” Giroud said ahead of Les Bleus’ game with Germany in Cologne.

“Arsene’s always supporting me and there is a lot of trust in each other. He trusts in me and I try to give it back on the pitch when I can.”

In Friday night’s 2-0 win over Wales, Giroud’s scored his 29th goal for France to move within one goal of compatriot Jean-Pierre Papin. The prospect of going level with his childhood hero, is something that makes the Arsenal man proud.

“Papin was one of my favourite players. I’m very grateful. I’m very proud and I always try to bring something to the national team.

“My best season was in 2015-16 when I scored 34 goals with Arsenal and the national team, including the Euros. Usually, I play a bit less with Arsenal but I always try to keep my efficiency high. That’s most important for me.

“I keep believing in my quality and I keep the faith. I have a lot of objectives with Arsenal and my country so I always try to move forward and keep scoring.

“It’s always a pleasure to play for the national team and I think we played a good game. We have a better understanding on the pitch now especially with the young players so we are very delighted.”

There have been suggestions that Giroud picked up a slight thigh problem on Friday. He was replaced by Alexandre Lacazette soon after scoring and will be assessed ahead of Tuesday’s friendly.

what a handsome man!

I wouldn’t mind seeing him together with Laca at times. The minutes that they shared look pretty fruitful.

And there’s just no way, one cannot love that handsome, bearded french bloke

For all the Robin van Purse-strings and $amir Na$ri’s of the world, it’s nice to see such a loyal Gunner. He could have left (and understandably so) after the arrival of Lacazette and on and off backlash from the fans, but he chose to stay and fight for his place and ultimately accept a super sub role.

If he manages to score 6 more before he retires, he’ll be third best leading goalscorer for France after Henry and Platini.

He hasn’t got a lot of pace to lose, that isn’t his game. Hence he has a few years in him. He has a good chance to keep it up for France and us.

Agreed. He could be a big impact player off the bench for us for four more years.