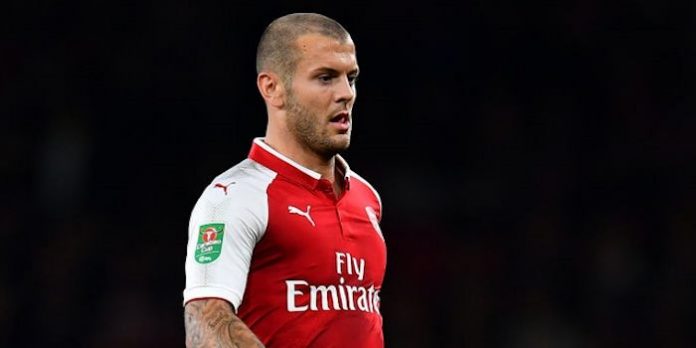 Roy Hodgson has made it absolutely clear that Jack Wilshere is not on Crystal Palace’s radar and claimed that the player’s agent is probably responsible for such speculation.

The 25-year-old is out of contract at the Emirates next summer and could be a target for a number of clubs in January should he continue to miss out on Premier League game time under Arsene Wenger.

Despite the prospect of Wilshere potentially coming on the market, Hodgson, who gave the midfielder his last cap at Euro 2016, today went out of his way to nip the rumour in the bud.

“Who has linked him?” questioned the veteran coach. “That’s what you need to find out, because it didn’t come from us.

“I will tell you who, his agent – because that’s where newspapers get their stories from.

“We have never mentioned his name. I work with Dougie Freedman and we talk about potential players, and Jack Wilshere’s name has never been mentioned in this room.

“I like him and I think he is a very good player. There may come a time at Crystal Palace where Jack Wilshere would be just the player we are looking for, but I can’t tell you that is the case at the moment.”

He added: “But good luck to Jack, I think he is an outstanding player and I have got nothing but respect for him, I like him very much, but why his name should be being talked about for Crystal Palace, I don’t know.”

He’s not staying now then is he

Agent starting to fish in the market could be the reason jack has not seen enough hopes of sufficient game time and a new contract this season. He is not the types who takes a challenge for a fight for first team too well. Hence why he opted for easy way out at Bournemouth last year

Short-term memory. Begin the narrative from when he rose through the ranks from 16. He’s tried very hard to break through the ranks and moving away from the Arsenal is something we know would always represent a disappointment to him. It’s been close to a decade though–i don’t think he’s not up for a fight, but he’s also looking to play regular football at his peak years. We can worry about this nonsense in the summer and just hopes he signs. Or leaves if that’s your school of thought. Either way let’s not bash his commitment.

I think if he was trying to fish in the market as you say, do you really think Jack has ambitions to join a club who are almost certain to be relegated?

Pretty standard stuff. Agent makes waves to try and pressure current club for a new contract. Wouldn’t be news worthy if it weren’t for increasingly our overly dramatic press.

makes waves using crystal palace…come on people use your brains…using palace to create waves ??? ripples in a small puddle would be more like it

Pretty disrespectful to a club who beat us 3-0 last time we played them.

Wasn’t there a story few years back, that Wilshere has NO agent,apparently coz he never wants to move

Anyone else remembers his “I don’t need an agent because I will never leave Arsenal” quote?
Think he’s got outstanding talent but I’m not convinced by his character to be perfectly honest.

Well, he didn’t leave Arsenal, so what exactly is the problem?

Actually he left Arsenal last year. And he asked for it. And he was the one saying he doesn’t think about Arsenal, he’s happy at Bournemouth because he feels more appreciated there. That must have been before they benched him.

Played virtually every match for them and was was a great success. He’s a true competitor who will give a 100% to the club he plays for. He never said a word against Arsenal

From mid February until the start of April he hasn’t started a single game for them. He was a constant sub. Against United we wasn’t even brought on. And he deleted Arsenal from all his social media accounts at that time. Sometimes it’s not about what you say but about what you do.
And zero goals and 2 assists in 27 games as an offensive midfielder isn’t exactly a great success in my honest opinion.

have a look at this for his stats.
http://www.transfermarkt.co.uk/jack-wilshere/leistungsdaten/spieler/74223/plus/0?saison=2016

Also if you take your Fifa manager head off and instead use logic, you’ll understand that resting/protecting a player that played less than 6 first class games the previous season (due to injury) is what every decent manager would have done, especially later in the season when the fatigue really kicks in.

Wenger TOLD HIM to go. Said he wouldn’t feature in the 1st team. What was Jack supposed to do?

Wenger wanted him to stay and fight for his place. He just told him he isn’t guaranteed to start and that’s pretty normal after a whole season our injured. But jack rather went to a team where he was guaranteed a starting place than fight for one at arsenal. And in the end even Bournemouth benched him for weeks.

He wasn’t benched, he was rested.
No manager would ‘bench’ their best team player…

Rested for 8 weeks? Yeah sure, every team rests their best player during the final months of the season. Pretty normal.

Where did you get 8 weeks from?
He was benched for 2 games all season, not in the squad for 2 games and injured for the last 5 games of their season (fractured leg!).
And not picking a player with a fractured leg is more than ‘pretty’ normal.

And the 2 games he wasn’t in the squad were against us, where he wasn’t allowed to play due to FA rules.

Nobody said this. But no Bournemouth fan would have been mad if he would have kept Arsenal in his bio as he still was an arsenal player. The fact that he deleted it from all his social media accounts made it pretty clear that he was angry at Arsenal but this wasn’t justified at all, if you ask me. Every other top club would have trashed him years ago with that injury record and all the stories about his private life. He should be forever thankful to Arsenal and not offended by the fact that he had to fight for… Read more »

So when has he indicated he wants to leave?

By the time he hired an agent that willingly spreads rumors about his departure. Jack is not stupid. He knows how this business works.

Do you know how the business the works?

I think he still doesn’t have an agent…
Must be the usual media bullshit from a lazy hack writer.

You question his character lol who are you?

Anyone who questions jacks loyalty to arsenal clearly hasn’t followed arsenal long enough. The guy bleeds red and white and will run through a brick wall for the team. I think the loan move was very brave of him. In recent years it’s been hard for him to break into the team after coming back from an injury. He lacked match fitness/sharpness so it was risky playing him in the premiere league when we had several players who were match fit and ready to go. So last season after signing Xhaka, coquelin’s emergence the previous year, Wenger always picking Ramsey,… Read more »

Hodgkin is a straight up guy. No playing games. Wishes Jack the best and denies the rumor. But it is the agent’s job to create hype just as it is Jack’s to prove he can stay fit and effect games before Arsenal and indeed any PL team signs him.

But he only made a guess at where that story came from. Its as likely to have been some prick at a newspaper trying to jump start another fake story for whatever reason so many so-called reporters have it in for us.

How can people be angry with that ?

This is a joke. Crystal Palace really?

Why would Jack even entertain going to a side in relegation trouble. A joke.

Jack’s agent should learn that this sort of behavior only gets you a new contract and better wages if you’re Theo Walcott.

If I am Jack, i’d fire the agent starightaway. Bad move obviously.

At 25yrs, he is a matured player now and one who can potentially balance out midfield for us better than Ramsey (or at very least as an alternate leaving the Welshman to compete for the berth further forward with Ozil) What I like about Jack is he has some of the ability to carry the ball from deep of Santi’s. If you pair this with what granit brings in his deep passing ability, we have two different assets to control midfield better. The only issue with Jack has always been his injury-prone nature. If he can sustain a campaign(maybe with… Read more »

An agent is definitely up to mischief.

Why does everyone assume the “link” to Palace came from Jack’s agent. Hodgson is saying it didn’t come from Palace–which I believe–but he has no way of knowing anything more. It could have been a guy who has an occasional pint with a guy named Cyril, and Cyril said that he heard it from his sister-in-law, whose next-door neighbor is Jack’s cousin by marriage. That’s good enough for about seven daily papers in England.

Whatever the truth on this, who cares really… we want Jack to stay!!!