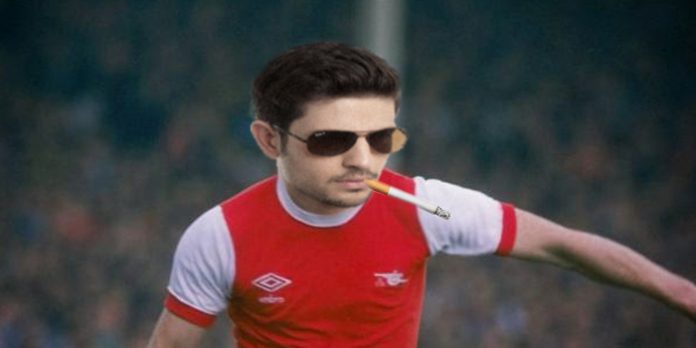 Everyone at Arseblog News would like to wish a happy birthday to former Gunner Steve Dallas.

Born and raised in Aberdeen, he was capped 73 times for Northern Ireland, and made his debut for the club in a 4-1 home win over Stoke City in 1968.

He went on to make 431 appearances, scoring an impressive 34 times from his position at centre-half, but sadly had an unfortunate string of injuries which prevented him from appearing in key games, such as Division 1, FA Cup, League Cup, and the Fairs Cup.

However, he was widely regarded to be one of the best passers at a time when footballs weighed more than a cow’s head and pitches often doubled-up as potato fields during the off-season.

After his retirement in 1978 he played briefly for Bloom County Basselopes in the old MLS, before returning to his native Wales to take up a coaching role with Plymouth Argyle.

Dallas would have been 67 today had he not died in a tragic fencing incident back in 1995.

Blogs has been reading comics again 🙂

Honestly didn’t know much about this man till now. (Not a plastic fan just born the same year of his death so too young to know) Happy Birthday to an Arsenal legend.

What are you smoking Blogs.

I used to be a big fan of Dallas. I seem to remember Hollywood star Owen Wilson was going to make a biopic about him a few years ago, whatever happened to that project?

It was changed to Kevin Spacey in the role but now wiped from history. Always clear your search history!

I wonder where Steveee is now.

Steve would be turning in his grave at this current shower of shit. No heart beat, much like him, although he’s turning in his grave so how does that work? No desire, Steve fulfilled his by playing in the Intercontinental/Toyota cup no less (why no mention in this article?). And of course no cojones, Steve was known for having bigger cojones than a bullock, Troy Deeney would have no chance sucking them, much as he’d love to as he really really loves cajones. Happy Birthday, Mr Dallas. Gone but not forgotten.

I beg to differ. There are no balls of any size that Troy Deeney can’t suck!

I imagine Opus would look a bit like Santi in the current tight shirts.

I love that kit. Isn’t about time for a retro inspired kit?

And where is the Dallas statue? Dude is a legend

I for one won’t be celebrating him.
It was my fencing that he broke. And I’m still waiting for the estate to pay out.
#bitterandtwisted

I had assumed he got on the wrong end of a sabre, but glad to hear the truth revealed. Good luck getting your funds back, but I’m sure it won’t be easy as just before his death, good ol’ Steve went on a gambling binge of epic proportions. But why am I telling you what you already know?

I try to let it wash over me. But sometimes, late at night, it’s all too much.
Dallas you bastard, give me back my fence…,,,

All my favourite Welshmen are from Aberdeen.

Wolf
Reply to  A different George

And my favourite Welsh town is Plymouth.

As soon as Interlull starts, one can’t wait for it to end

Last I heard he was on talksport mouthing off about arsene wenger!

Legend of a player! I remember him bagging a brace against Watford in a league cup tie two days after having life saving surgery because he’d eaten a rotten wolf

Probably roasted it using fuel made from my fencing, the bastard.

No way
Reply to  ClockEndRider

It was tree before being killed and chopped up to be used as your fence, maybe apologize to the forest before you start making derogatory statements about fence breakers.

SuperTom7
Reply to  No way

Yes. He got sent off for that in the cup game against Wolves a few weeks earlier.

Happy birthday Steve. I’ll never forget the 50 yard overhead kick screamer you scored at Old Trafford in the 72-73 season in the 89th minute. The Man U keeper that got mugged off that day was M. Ullet, if I remember correctly.

He can’t be dead! I just saw him in a Bloom County episode today, accused of sexual shenanigans.

Ohh why do you mess with my sanity, Mr Bloggs?!!!

Steve Dallas is a fictional character in the American comic strips of Berke Breathed, most famously Bloom County in the 1980s.
Took me ages to find…:-)

I thought I new all the ex arsenal players, but I must confess, I have never heard of him