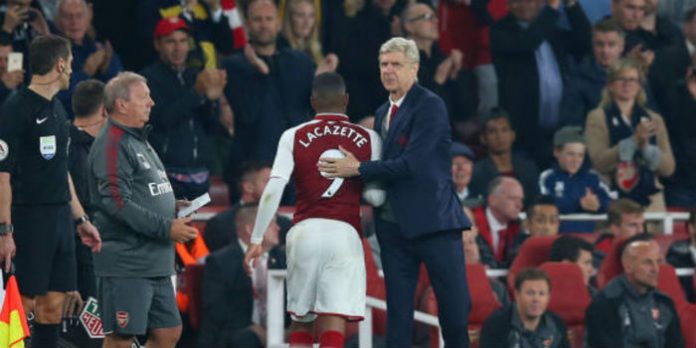 Arsene Wenger says he’s very happy with Alexandre Lacazette’s start to life in the Premier League and clarified that his decision to substitute the striker on a regular basis is based on a combination of factors.

The France international has racked up 903 Premier League minutes in his 13 appearances this season, however, he’s only completed one game – against Leicester on the opening weekend – leading to questions about whether he can handle the physicality of English football.

Eager to stamp out any such criticism, the boss underlined that making attacking changes is hardly surprising given the work rate put in by his forwards.

“First of all I would like to say that in my job you sub strikers more than defenders, because they have to create, they have to provoke, they have to be incisive in every run,” he told his pre-Huddersfield press conference.

“Secondly, I think he adapts physically to the Premier League and I’m very happy with the work he does for the team every time he is on the pitch, and thirdly I do that as well because I have other options on the bench who are fresh and can give us another variation in our attacks.

“Physically, the Premier League is very demanding. It demands a huge intensity of work and if you look at the other teams, they take off a lot of strikers as well after 70-80 minutes, between 60 and 80 minutes most of the teams change their strikers because first of all many times they have to work on their own up front against two or three people.

“Up front you provoke and at the back you respond, so it’s completely different and much more exhausting physically and mentally.”

Can see the logic, but many people in the past have said wenger pushes his strikers physically to breaking point… whats changed?

Giroud and Welbeck on the bench? ie more players to put on and have an impact.

But just because Giroud and Welbeck are good options on the bench doesn’t mean that they’re necessarily better options than Lacazette in the match. I’m certain that he’d have scored a lot more goals by now if he played 90mn more often. Look at how many late goals Lukaku and Morata have scored for instance.

Agreed, more than any other position strikers thrive on confidence. If he was left on to get a few tap ins around 80th minute mark I think it would do him the world of good.

Or maybe he’d have a groin strain/ muscle tear or some other injury caused by fatigue. This is the first season he will miss out on a Xmas break, which together with the consistently high pace of the PL, do make much greater physical demands than any other league.
Hopefully Lacazettes fitness/form won’t ‘drop off’ later in the season due to exhaustion.

Perhaps you should just step up and be manager then !

Decent options on the bench?

He no longer wants to break them

Many people, or Michael Owen ?

Unless you are Thierry Henry.

Then again I distinctly remember him getting subbed for Kanu or Wiltord in the 70th and 80th minutes especially against lower league opposition or if there were any European games coming up.

In his first season he was subbed regularly. Then in his second season he was a bit more prepared both physically and mentally for the full (uninterrupted by an xmas break) season.

If Alex starts banging in goals and we need one more, I’d assume that Le Boss would keep him on too.

There was a period when Henry was consistently in and out due to injury.
It’s just that when he’s on the pitch, he most often than not performs
*he was *performed *I miss Henry

Fair enough. I’d like to hear why he did not start the City or ‘Pool games though.

The manage explained that immediately after the $iteh game.
It was a tactical decision.

I’d guess the same was true for the Liverpoo! game.

I imagine Lacazette must have been ITCHING to get out there and wreak havoc on the opposition in both of those games.

Lack of striker rotation effectively cost us the title 15/16 when Giroud had a 16 game drought or whatever it was. Having multiple options and using them will hopefully maintain a high level throughout.

Not in his first season he didn’t.

Tbh, if Laca was injured or subject to a late challenge by a tired opposition. That would also be ‘mismanagement’.

Just common sense to keep our best striker as fresh as possible ahead of the Christmas period.

Welbeck and Giroud are so different. And with Ozil/Sanchez possibly leaving. We do need one player who will be consistently playing during the possible transition period.

Obviously Wenger can’t talk about that or every redtop newspaper would go to town on the comments.

If that’s the logic, shouldn’t we be starting Welbeck so he can run around and tire the opposition out, and then put an actual striker on to score goals.

Doesn’t make sense to do it the other way around, Welbz is a great guy, but let’s be honest.. he can’t finish.

He surely can finish. Just not consistently enough.

13 league goals in four years with us says otherwise. And before you bring injuries into it, that’s 13 goals in 58 games which means he scores in about 22% of the games he plays. By comparison, since Welbeck joined, Giroud has scored in about 52% of his games and we all know how much stick he’s been given over the years for not being good enough. Don’t get me wrong, I recognise the other things he brings to the game, like his pressing, his movement, and his role in counter attacks (hence my original point of using him to… Read more »