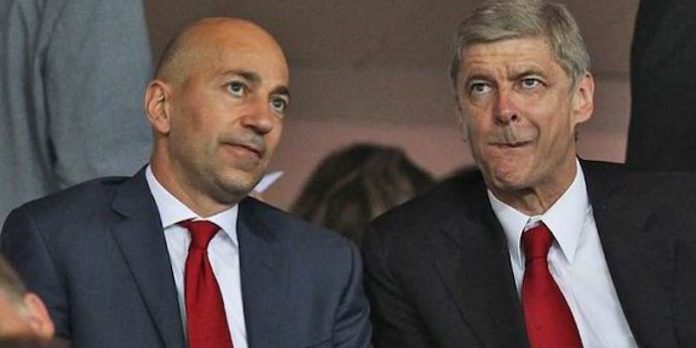 Following the announcement that former Barcelona Director of Football Raul Sanllehi would be joining the club as ‘Head of football relations’, Arsene Wenger has made it clear that Ivan Gazidis has no part to play in buying players for the club.

In the official announcement on the Arsenal website, the Spaniard’s role was described as someone who would ‘lead future player negotiations and work alongside manager Arsene Wenger, chief executive Ivan Gazidis and contract negotiator Huss Fahmy.’

However, the Frenchman bristled at suggestions that Gazidis had a part to play in player purchases, and when asked about Sanllehi working with the recruitment team, he said, “With me. Ivan has nothing to do with buying players.’

The relationship between Wenger and Gazidis has not always been perfect, and perhaps this is a reaction to the Chief Executive setting up an office at the training ground over the summer, in addition to his regular space at Highbury House.

“Dick Law has retired and has gone back to the States,” Wenger explained.

“He is still with us for a while, but we look for somebody as well who has experience in negotiations. Dick is still working with us on cases where we need to do.

“We have Huss (Fahmy), who is top drawer, but has just joined us one year ago, but is doing an excellent job, I rate him highly. There is still a need.”

The manager also revealed that Steve Rowley would continue to work for the club in the interim.

The former chief scout was replaced by German Sven Mislintat last week, but will work on a part-time basis as Wenger explained.

“Steve Rowley yes will stay with us, and work more with the more part-time on a youth level.” he said.

“And we need another scout. Today we have a structure in England, we know everybody.

“We have taken somebody [Mislintat] who has international experience and that is why we made that decision.”

Ok, sounds pretty positive. We need more skills off the pitch, he recognises that and sounds approving.

If I was Huss Fahmy I’d be well chuffed with that. Probably go home, tell the missus and try and get some credit down the pub with that quote.

If anything, Sanllehi will play the same role David Dein did when he was at the club. Whether Wenger and Sanllehi can strike up that kind of relationship is another thing. I find it funny people think this appointment signals the end of Wenger. It wouldn’t surprise me if Wenger stayed beyond 2019.
If anything, I see these appointments as Wenger’s last attempt at a push for the epl and ucl.

This is Wenger being gently nudged out of the back door. When Gazidis realised that he couldn’t just shove the old fool out last summer, he probably decided that the best way to win this power struggle was to slowly undermine Wenger’s power base until Le Prof gets fed up and walks away. Sanllehi has enough footballing authority to tell Wenger to go forth and multiply. He will be the director of football which Wenger thought so unnecessary.

The only question is whether Wenger goes this summer or next.

Gazidis has no real authority over Arsenal football department. Maybe he can go focus on making Puma pay more…thats it.

Sanllehi more authority than Wenger? What are you smoking dude?

Sanllehi will handle contracts, player negotiations, etc…I repeat – THIS DOESN’T MEAN WENGER WILL LEAVE BEFORE OR AFTER 2019. None of these guys will buy players Wenger doesn’t want. All Wenger will have to do is give Sanllehi the list of players he wants and Sanllehi does the rest.

Keep reading Wenger’s propaganda. Sanllehi is nobody’s dogsbody. He’ll tell Wenger where to go if he needs to.

Fats, just when I thought you had imploded from your eternal bitterness, up pops your post.

Oh well. One can always hope.

if wenger stayed for another ten years, we still wouldn’t win the epl or ucl

Well last 2 weeks and so has been really positive for us…
Also to see pundits finally realizing that spurs won’t be title contenders after being 15 or so points behind this season while we are never title contender even if we lag by 5 points or so in the past few season..

Arsene is resisting change. He wants to maintain total control until the end of his contract. Surely, something is not right and something more is coming!

I might be wrong but he doesn’t sound happy about the whole appointments. I hope he gives these new guys the freedom to do their jobs and not restrict them with his controls.

I think he’s just pointing out that Ivans only role in buying a player is in the allocation and agreement of a transfer budget. Ivans job is the running of the ‘corporation’ not the footballing side of the business.
Too many people (fans and hack journalists) don’t understand this.

Agreed. People also regularly overplay Dein’s involvement in actual transfers – he was very well-connected, developed a good working relationship with Wenger and set the budget, but his role was never to oversee the detail of signings, contracts etc.

I think allocation and agreement of a transfer budget is a role of the board . Ivan is management , Wenger is resisting change and wrongly trying to show who has the power at Arsenal.

I think it’s time to give credit where it’s due. Obviously we don’t know now how successful all of these new appointments will be, but Gazidis has (perhaps very late) recognised the need to modernise the structure and set us up for the future. And, clearly, he hasn’t been blocked in his mission by Kroenke despite all of these new people not coming cheap (but why would he if they mean the club is run more efficiently?). These are forward-thinking and impressive-looking signings. We’ll never know how much Wenger was on board with the roles/people (although I personally think that… Read more »

Something is brewing at the club. What is clear though is that the Governance Structure is inverted at Arsenal. A manager is supposed to report to the CEO but this seems not to be the case at Arsenal. How can a manager say the boss is not involved in player purchases unless him? Clear case of insubordination. However, with these appointments,there’s a devolution of power such that when Wenger finally leaves, there will be no vacuum.I agree that Gazidis is slowly but surely consolidating his position and Wenger is equally slowly but surely losing his power as has happened to… Read more »

shame, we might have a decent team if he did

We slowly getting back up. Next is an increase in our transfer budget. The days of paying the Emirates debt are coming to the end. And Wenger need to be recognized for keeping the club at the top with less world class and big signings in the past years.. I feel like we are going to reposition our self as one of Europes biggest clubs very soon. We brought in a few expensive players in the past years but I feel we will be able to bring in even more with all these new guys showing up.

Is anybody actually gone?