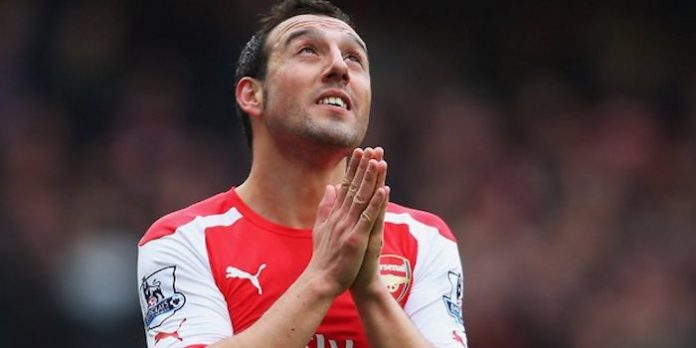 Santi Cazorla, who has been through so much already, has sadly provided an update on his situation, and revealed that he’s had to undergo yet another operation.

Details of just how horrendous his problems have been emerged earlier this month, but it seemed as if he’d gone beyond the point where surgery was required again.

This brings the total to at least nine operations since he was sidelined back in October 2016 with an Achilles problem.

Due to some discomfort in the tendon that has dragged on for the last few days, I have had to undergo surgery. It is delaying the date of return to the pitch. I maintain the hope and motivation to enjoy my great passion, soccer #football.

It’s a dreadful blow for the 33 year old, and casts even further doubts over his ability to return to action. As ever all we can do is wish him the best and hope that he can finally get on top of this dreadful situation.

Poor Santi. Our mercurial maestro. Why is it always the happy, awesome ones get chronic injuries?

Good luck with the rehab.what a player we could have if he was fit much better than ramsay and xhaka.

This is a real shame. It’s really starting to look like we won’t see him in an arsenal shirt again. A true legend, gentleman and brilliant player.

This guy…..for how good he is at the sport he loves to play, this is so, so cruel.

Get well soon Santi. We all love you.

Why do the good ones get knocked down so bad ??

Forget about football and contracts and who’s getting what wages. Everyone at Arsenal should look at Santi and realise how fragile life can be. Look at him & feel him. Our hearts & thoughts god’s out to you, brother. Stay strong and get well soon!

I have to say Arsenal has the worst medical team ever. It’s as if we sacrifice a top talent to the gods of injury.

To be fair, I don’t think either our medical team or the people he ‘made cunts out of’ can be blamed.

It is a chronic, ongoing injury that is being treated outside of the club – actually outside of this country.

Let’s just wish him well rather than try to apportion blame.

Sure blame the club! Have you read the interviews etc? He caught a freak infection that consumed eight inches of his tendon. Must be Gary O’Driscolks fault for injection the infection into the tendon then! FFS
Arsenal as a club, have done a lot of things wrong in recent years. This isn’t one of them!

Wishing you the very best of recovery Santy. GUTE BESSERUNG

Soon Reiss Nelson will be the next in line. Our medical team is legendary

9 operations. I guess they’ll get it right after the 10th operation. Clueless

You’re a bundle of joy, aren’t you?

Love you Santi.
You made me fall a little bit more in love with football with your infectious smile and magical feet.
Get well soon!

a pro athlete with the best state of the art medical care there is gettin an infection on the operating table is absolutely astonishing and unforgivable in this day and age…many many heads should be rolling
poor poor santi,what a magician
get well soon and remember the rest of your life,and the quality thereof,maybe time to think of passing on your genius in a coaching compacity instead
sorry for u santi

This just makes me sad…..

All I want for Christmas is you… to be better. Get well soon, Santi!

Funny how the same old idiots attribute the blame to our medical team. Santi is the most technically gifted player at Arsenal. His career has been destroyed by the FA and the Premier League for not taking the standard of fair play seriously. We have selective and fireman like officiating in our league. By that I mean, whatever is deemed serious enough, the FA only then step in to put out the fire. All the billions the league makes and we are still watching a middle aged man prance around the pitch in high intensity environment, hoping they will make… Read more »

Does it mean that it’s only arsenal players that get kicked. I believe the medical team has some questions to answer after all wenger said it some time ago that he has lost confidence in his medical team

Surely this is his last operation, any setbacks now that requires surgery should be a sign for him to retire. So sad for him. Get well soon!

This is soooo sad. Get better Santi

The thought of *another* Christmas without Santi makes me very sad indeed! Get well soon!

That poor guy, I can’t even begin to imagine what he’s gone through and all the work he’s put in to be able to get back on the pitch. Reminds me so much of the situation Rosicky faced as his career was winding down. Two of my favorite all-time players not just for their amazing technical ability, but the joy and grace with which they played football. I’ve never seen anyone appear to love to play more than Santi.

So sad for this lovely guy, not just for The Arsenal.
To lighten the mood; did you see Sp*rs last night? LOL

Just retire for the good sake of his post football life.

Speedy recovery Santi and i sure hope Wenger and the board will extend his contract for another year.

no point,playing days at highest level for this genius are tragically over it appears
time for him to think of he’s health goin forward now
give him a coaching role,santi’s aura,charisma, genius and infectious smile can only b a good thing to have around for all players and staff at the arsenal

We’ll wait for you Santi!

This is so deflating to some of us who love watching real talent on the field, I pray that you get well soon Canti and play end your carrier at Arsenal. We all cant wait to have you back wizard!

Depressing shit. Fucking talent that he was, he deserves better. The world can be unfair.