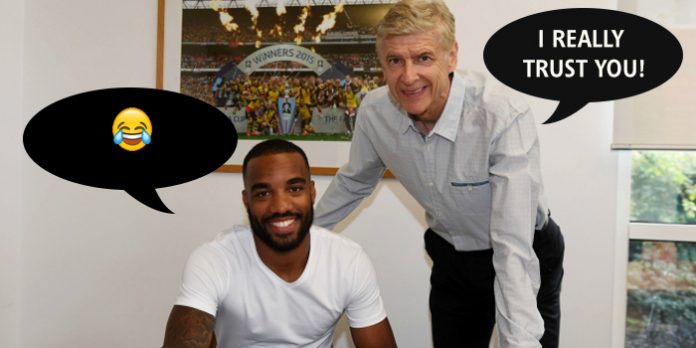 Arsene Wenger has denied suggestions that he doesn’t have faith in Alexandre Lacazette for big games, saying he has complete trust in his record signing.

Eyebrows were raised when the former Lyon man was left out of the starting line-up for the 3-1 defeat to Man City before the international break, but the Arsenal manager insists there’s no issue.

Asked about it at his press conference today, the 68 year old said, “No, that’s not the case at all.

“I have a big choice every time up front, but he played many games Alexandre Lacazette.

“He didn’t play away from home against City, I think that’s the only game he didn’t start [editor – he also didn’t start away at Liverpool].

“Overall, I trust him completely.”

As for his selection on Saturday, he continued, “The decision has not been made yet. It’s a possibility because he’s available.”

Concerns about Lacazette’s unhappiness were played down after the City game by his agent, who said, “It’s not worrying, because he played at Chelsea.

“Our way of working is to relativise things: 11 matches, nine starts. Of course, it’s not nice to see that he didn’t start that match, but it was, as Arsene Wenger explained, for tactical reasons.

“He’s learning. Alex needs to have calm around him. He’s happy, and Arsenal are too with his work.”

With Olivier Giroud ruled out and Danny Welbeck still facing a fitness test, it would be staggering if Lacazette didn’t start the game.

I mean, how else is he supposed to score a hat-trick?

He can score a hatrick from the beach coming on for Eddie who’s already bagged a hatrick?? I wish

I didn’t realise we were playing beach football ???

I (do not) trust Lacazette (at all) completely.

AW doing well for his age….

Lol the guy who downvoted you didn’t notice the “568 year old” in the article obviously.

“I trust Laca completely” , its just that “I like a little bit to fuck with his head”

lacazette to start up front with eddie on the bench pls! u’re never too young n eddie’s red hot fire!!

“I don’t the team selection yet.”
Yes we know, everyone knows:
Cech
Bellerin- Debuchy (the Boss is injured)- BFG (Musta injured)-Montreal-Sead
Ramsey(hurts me) – Xhaka
OZil (should be Iwobi)- Lace- Alexis

Wenger has never trusted Lacazzette. If he did we would have had him with us two years ago. Remember he is at Arsenal because of Athletico’s transfer ban and Arsenal missing out on Mbappe. Wenger’s hands were forced and I can see Lacazzette also trying to run down his contract. Do you think if Pochettino was asked about whether a fit Harry Kane will start he would have said he’s not taken a decision yet? My fear is Wenger will let his actions hit his confidence just as he did with Xhaka last year with his needless substitution in all… Read more »

Exactly right.
Not look forward to this one.. it’s got all the potential in the world to ruin my week.
Mike Dean is reportedly starting for Spurs just to top it off.

Lacazette is the coolest player we have had since Henry. Have you seen his celebrations?

I mean … Better play Lacazette…he’s going to be with us long term not Alexis.

Rather have Giroux as point holding the ball than Alexis if that’s what was needed.

Lacazette should start with Alexis and Ozil on either side. Might be a role for Iwobi too.

It’s with great pain for me as a long-long-term Gooner that I say that I loved Wenger. Not that I love Wenger. This is really disingenuous stuff. Of course he had not forgotten the Liverpool game where he didn’t start and the significance of that. Why not say you will start him against Spurs. The player will lose confidence if he does not believe the manager really wants him there, which he doesn’t. He never wanted to sign Lacazette. The irony is that he should have signed him two years previously when he was half the cost. Wenger lets his… Read more »

“Wenger: I trust Lacazette completely. Oh, wait. Welbeck is also coming back. So, …”

Hahaha. I’m sure Laca thinks exactly that as he’s brought off every game.