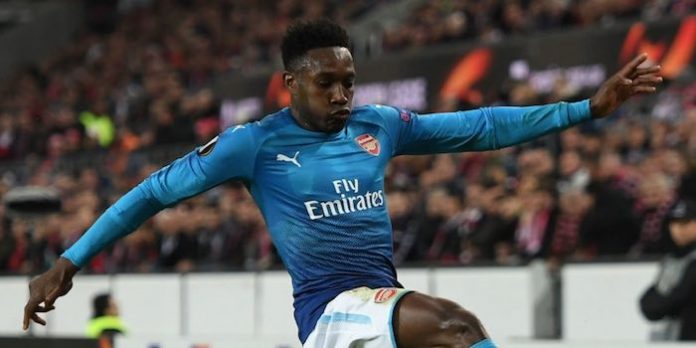 When Alex Iwobi replaced Danny Welbeck at half-time during last night’s 1-0 defeat to Cologne, it sparked initial fears that the forward had picked up another injury.

However, it was revealed after the game that it was a planned move, designed to give the 26 year old some minutes as he makes his way back from a hamstring strain.

The England international is viewed by Arsene Wenger as a key component of his ‘first team’, and the Europa League game was used as a kind of fitness exercise for more important fixtures.

“It was planned before the game that he would only play 45 minutes,” said the Arsenal boss.

“He has only just come back from injury, and we have three more games on Sunday, Wednesday and Saturday again.

“Medically, the risk was a bit too high to play him for longer because he has been out for a while. He has no problem.

“Of course, he was ready to stay on and frustrated to come off, but he’s in good shape.”

Arsenal take on Burnley on Sunday, then face Huddersfield away in midweek before hosting Man Utd next weekend, so the schedule is pretty hectic.

Fingers crossed those 45 minutes help Welbeck make a telling contribution over the next week.

I know. I nearly chocked on my coffee.

Was it chock full of nuts.

Welbeck is kinda losing it I feel. From the highs of scoring the opening goal at the bernabeu through a thumping header to being in and out of the team, things have definitely not gone as well as were expected.

What are you trying to say here?

He is kinda losing it because he was injured and now coming back from that injury? You are surprised that he didn’t score a goal or 2 immediately?

I am saying that whatever the reason (most likely injury) Welbeck is losing the plot, which makes me more sad than anything else.

Welbeck is at best a bench player for the first XI. We need a class front 3, like we have now. While I love Welbz, he’ll never have the quality needed for a title push. However, he’s perfect for the Wiltord/Kanu role – effective when needed.

Yes, he is vital in certain games and adds something other guys don’t bring (namely hustle, ball retention, strength and speed), but his finishing is not good enough to be on the team sheet every game. Great squad player and I love having him around, great dude too! But doesn’t have the “X-factor”; that game changing moment that Alexis and Ozil have in their lockers. That HAS to be replaced if (or when) we lose those two. The next two transfer windows will be the truest test of Arsenal’s so called “Footballing Ambition”. As much as I love Welbeck, Iwobi,… Read more »

Is it me, or do we play shit whenever we wear that horrible blue shirt

We play shit pretty frequently so it’s difficult to say

Hahahah – this had me dying with laughter at my desk.

Welbz flatters to deceive. He’s supposed to be fast and strong. He should be unplayable. Instead, he huffs and puffs around the house without ever actually blowing it down. And I’m not basing my comment on the 45 minute cameo.

I think you mistaken athletic ability with technical ability. He is fast and strong. Problems are that he isn’t a good a finishing and at this point in his career I don’t think he will develop into that top scorer and his first touch isn’t the greatest either.

We need a fit and firing Welbeck asap. If there is anything glaringly true about this “Europa team”, it’s that none of them has made a case for their inclusion in the first team. I expected Giroud, at least, to make a case for himself; he did not. Coquelin and Elneny will never improve beyond what we’ve seen – we need better back up than those two. Wilshere, sadly, it seems will not get back to that Wilshere we all dream of – the one who made Xavi and Iniesta stand up and notice. Sigh! He tried. You could see… Read more »

Disagree–Giroud should stay. He’s a known performer, and every striker has quiet games. We’ve seen worse, and more importantly, he’s always rebounded. Him and Wilshere have an understanding, and with Mertesacker, Giroud, and Wilshere, we have a stable spine for a B-team that allows youngsters like Nelson and Maitland-Niles to flourish. Elneny is also the essential distributor for this spine, so unless you want Wilshere to jump into a holding midfield role (no)…

Coquelin in the new Beckenbauer

Huddersfield in midweek is at home. 🙂

I rate Welbz, he puts in a shift and gives defenders a run for their money. But needs to work on his finishing. Trouble is that whenever he starts recapturing his form he gets injured and has to start all over again.
He was on good form when he had that serious injury last season that kept him out of the squad for the remainder of it.
Good luck to him this season, I want to see what he can do..

The thing about Welbeck is he can have the deftest of touches and then moments later have a heavy touch.

He also tends to hold on to the ball slightly too long.

All this will come with more experience and playing time.

He does certainly have the right raw attributes to succeed Giroud in time plus the added power and pace.