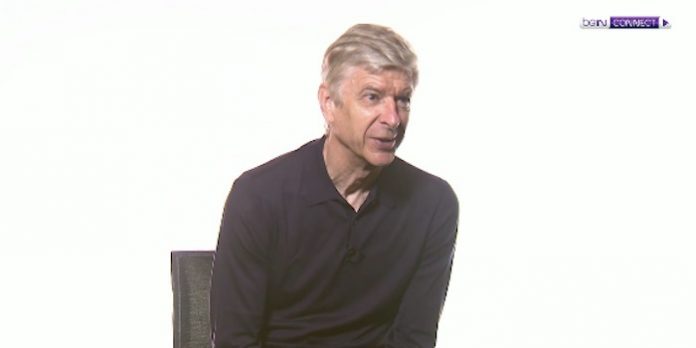 Arsene Wenger says he’ll stay in football when he retires as Arsenal manager but admits any future role, including coaching at international level, will depend on his physical health.

Making clear that he’s happy with his domestic commitments at the moment, Wenger, who turned 68 recently, refused to play down the temptation of World Cup coaching, even though he’d be well into his seventies by the time Qatar 2022 comes round.

“Until now I like to be involved every day in the life of a club because that there is the real test,” he told beIN SPORTS.

“Four or five weeks, ok it’s a different experience, it’s more concentrated, but I believe the real experience to manage a team is on a daily basis…but I will not always have the strength, the physical strength to do that.

EXCLUSIVE: Wenger reveals plans for life after @Arsenal… he wants to coach at the @FIFAWorldCup! #WorldCup #Qatar2022 #AFC pic.twitter.com/QgQW5owTEj

“Yes [it’s tempting to coach at the World Cup], of course. I haven’t decided that, it’s a fact that my life is linked with football, in what way [in the future] it will be linked with my physical state.

“Until the end of my life I will be in football, I don’t know in what kind of [role] as a director, as a manager…as long as possible as a manager, but one day that will stop. But I will stay in football, of course.

Asked if he might be on the coaches bench at World Cup 2022, Wenger joked ‘maybe’ before offering the interviewer a gig as his assistant. Pick us Arsene, pick us!

boring..
bring on the NLD already.

We all know we’re going to lose. At best, we get a draw.

a hint that he is our future “director of football” or whatever they wanna call it?

He is opposed to working with a director but doesn’t exclude being one.

Director of Football might be a good fit for him. He still has a great sense for finding talent and potential, and could work with a modern, tactically-focused manager.

Madness! He’d never relinquish control. No respectable coach would except that situation.

Seriously get a fucking grip

Does Wenger own BeIn Sports?

Wenger is their technical adviser for football plus he is close friends with PSG owner who also owns beIN.

Explains why the questions are so sycophantic

Love the name you chose. I am guessing your irony radar is broken.

One of the criticisms of Wenger has been his tactics or lack of.

So, it would be interesting to see him test himself in a tournament – where the need for switching tactics is pretty high.

I swear it’s WengerIN sports and not beIN sports.

It seems like Wenger wants to complete 25 years at the club, he’ll be 72 after that and would have to leave in 2021 in order to take over a country to give him enough time to work with them and get used to them for the 2022 World Cup. Whatever he decides all the best our biggest legend (whatever your opinion is now, can’t deny the fact he is and will be our greatest manager). #OneArseneWenger

P off!!!
George Graham was our greatest manager!!
And he could win in Europe!!!

He won a small lesser trophy in Europe…

He won a trophy!

When you talk rubbish, try to involve facts. Wenger is our most successful manager not because of opinions but because he’s won the most trophies for our club than any other manager in our history.

That has nothing to do with whether I think he should stay or not, just saying I pay respect where respect is due. Christiano Ronaldo is the biggest egotistic Cunt in football, but his achievements means you respect him whether you like it or not.

What a rubbish article! Wenger will be Arsenal manager until the day the dies.

Is it really you, Fatz?!

You’d be considered cheerful around here these days

I’m gonna pull off a classic Wenger quote on Fats and do the impossible (turn him WengerIn) . Hey FatG “If you love football then you love Wenger”

I love Arsenal NOT Arsene.

I love arsenal, not just arsenal when they’re a successful team. Negative glory hunting fans out!

I see a possibillity of AW becoming the Qatar manager after his current contract runs out. Go for it, get us Silva or Potter.

If and when wenger takes over a national team in 2022, would he have passed Alex fergusions, most years in charge by then , I think it would be 28 years by then. ( is this the correct amount if years ) He beats that record of tears in charge and most games in charge etc,.. Then manages at a World Cup….

Although I want a new manager, I’d much rather negative glory hunters that know nothing about football or arsenal’s history leave our club.

I’ve said it quite a few times o Dr that 4 seasons to those annoying Wenger Out minions…Wenger IS going to leave sooner than later.

And I’ve mentioned likely timeline will be post 2018 world cup where there will be an inevitable reshuffle.

Most likely he will show into the France job following Deschamp.

Bland or Deschamp are potential candidates to succeed Wenger thereafter. Both have the pedigree and experience not to mention follow on on Wenger’s ethos.

Please Arsene, return to France or wherever you want but go. Thanks for the memories of course but go!