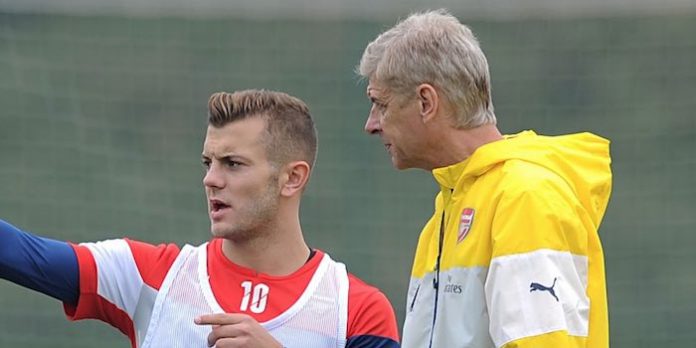 41 – Jack Wilshere led all players in the Europa League with 41 attempted dribbles. He also won 28 of his attempts, again leading all players, for an impressive 68% dribble rate. Wilshere beat out Adnan Januzaj and Nabil Fekir in this category, two players Arsenal supporters know well. Fekir had a higher success rate with 77%. Januzaj was just 60% successful, and also only played in 4 matches for Real Sociedad, so his total number of attempts was lower but his per match dribble rate was higher.

2 – Wilshere also led all players (tied for the lead with 8 guys) with 2 key pass through balls. For those that don’t know what this is, it is one of Wenger’s trademark skills he teaches players: pass between or over defenders and on to a teammate making a swooping run in behind. If it results in a shot, it’s a high percentage shot. Weirdly, his teammates didn’t convert for him and he ended up with 0 assists off throughballs.

14 – Wilshere led Arsenal with 14 key passes which was good enough for 10th best in the Europa League (tied with three others). Sergio Canales led all players with 26 key passes (5 assists) but digging into the stats a bit more we see that Canales created 10 of his KP off corners and free kicks.

6 – If we switch from total passes short passes completed to short passes completed per90 (and adjust for at least 2 games) Nice have SIX of the top 10 players: Tameze, Seri, Mendy, Dante, Koziello, and Le Marchand. You probably won’t be surprised to learn that Nice blew everyone away with 625.5 short passes per game. Real Sociedad were second with 598.5 and Arsenal were third with 543.8. Below them in 4th was Villareal but the drop was steep: 488 per game.

17.8 – Real Sociedad led all teams with 17.8 key passes per game while Nice were 17th with 10.5 per game. When you look at who the top two passers were on each team this makes sense. Sociedad’s attacking mid, Sergio Canales, was 7th overall in total completed short passes. Unlike Nice, who were busy passing around for defense, Sociedad were using their possession to get forward and create chances. They created 5.3 more chances per game than 2nd best Villarreal, 6.1 per game more than Arsenal, and 7.3 chances per game more than Nice.

14 – Arsenal scored 14 goals which is a respectable 4th best in the Europa League (Sociedad scored 16). However, there were some real problems in this category. Arsenal scored 10 of their 14 goals against BATE Borisov. And after a 7 goal blitz against Köln and BATE, went 3 games scoring just 1 goal. Real Sociedad scored in every match, even the two crushing 3-1 defeats at the hands of Zenit, who won their group. Nice had a record much like Arsenal’s, failing to score on three occasions. Interestingly, Arsenal could draw either of these teams in the next round, because they finished 2nd in their group.

2 – Arsenal’s leading playmaker was Theo Walcott with just 2 assists. I know that the official Arsenal twitter account said that he got three last night but falling over to win a penalty and crossing a ball for an own goal don’t count as real assists. Those are “fantasy assists”: they count in your fantasy sports stats but in real life, they don’t count toward the official assists records. Personally, I agree with the more strict definition and I think a player should have to intentionally pass a ball to have it count as an assist. Maybe you’re a more generous spirit and want to count every last action prior to a goal as an assist. You can do that! I know that there are times when I will play a ball across a string of defenders, struck low and hard and my intention is to either get it to the striker or to cause the defender to miss his clearance and put the ball into the net. So, I can see the argument for both.

7 – Giroud was tied for 4th in headed shots with 7. He only attempted 22 aerial duels in this tournament, he was WAAAY down the list in 82nd place in that category. Arsenal were 16th in aerials won. These matches were mostly ball on the carpet.

12.3 – I wanted to see if not playing with Alexis Sanchez made a difference to Arsenal’s overall dispossessed numbers (number of times the opposition took the ball away) and turnover numbers (number of times a player made an unsuccessful touch and they did. They went up. In the Premier League, Arsenal are dispossessed 10.3 times per game, which is 13th most in the League. In the Europa League that number goes up to 12.3 per game (10th most). In terms of turnovers for bad touch, Arsenal are 5th worst in the League with 14.3 and 26th in the Europa League with… 14.3 per game. The dispossessed number isn’t actually a surprise. Arsenal with Wilshere, AMN, and others are a much more dribbly team (2nd in EL with 26 per game and 14th in the PL with 13 per game) and thus offer more opportunities for dribble duels. The difference between successful dribbles per game is also stark: 9.1 in the Premier League and 17.2 in the Europa League! There is simply more space and time on the ball in the Europa League, at least there WAS for Arsenal in this tournament. To give you some context, Alexis Sanchez has been Arsenal’s most prolific dribbler and this season in the Premier League he averages just 2.2 per game. In Europa League, Jack Wilshere is 4.7 per game, Iwobi 3, Welbeck 3… even Theo Walcott is averaging a career high 2.6 dribbles per game. His previous career high was 1.8 in the Champions League. In 2010/11. So, um, yeah. These are much different leagues, y’all.

would love too but the reality is this cup is going to be very difficult to win. athletico madrid, borussia dortmund, napoli have failed in the cl and would be hard opposition . this year’s europa league look very competitive. so arsenal the year we ‘re in it , tough fixtures are awaiting us.

Those were my thoughts, exactly. Look at the shit that was in it last year, so that Man U had a nice run to winning it, yet when we’re in it we get Dortmund, Napoli and Atleti (and they will have a refreshed Diego Costa in their team come the time the EL starts up again)!

actually i say bring it on ! at least it brings more pedigree to the mickey mouse cup that manure won last year

Tough but all winnable on our day. You only need to look to the FA cup runs to see what we can do against big teams in cup competition.

And the traditional CL powerhouses like Real, Barca and Baryen seem weaker the year we are not in that tournament!

I actually think I get some insight from these stats. Certainly the eyeball impression that our players often have more space when they receive the ball, and more time to choose a pass or cross, is borne out. Partially confirms the stereotype of the Prem as super-fast closing-down–if you don’t cross on first touch it will likely be blocked, if you wait a moment to pass, your teammate will be marked too well for him to do anything.

Certainly the case in the first half against BATE. They stood off and every Arsenal loose touch was allowed to go unpunished.

Probably the player who most benefitted from that was Theo Walcott.

A Different George
Reply to  7amkickoff

Absolutely. Theo’s great weakness has always been his technical ability. But that’s compared to elite players–give him an extra yard, and he’s fine. (And, in my opinion, he has other qualities beyond his obvious pace–his intelligence off the ball and his finishing–that are very valuable, even in the Prem.)

I’m with you on assists. It can be such a misleading stat that its hard to give it credibility sometimes. How often does the ball hit someone’s knee on the way through and it goes down as an assist? Or there’s some really creative play just before someone has the slightest touch to claim the assist? I think even corners are a bit of a dubious assist, usually dead balls dropped into area (admittedly some are more assisty than others). And I’ve never really been a fan of the assist as it kinda undermines the team build up to the… Read more »

You can say a similar thing about goals themselves… I think more often than not, an assist is an important statistic. However, I do believe that build up play that leads to an assist (assist of an assist, if you will) should also count for something as it is just as important.

Walcott pass the ball to Welbec, defender interrupt, taking welbec position though not a gunner, so to me count as an assist. Whoscore said Walcot have 3 goals and 3 assist in europa league. Sanchez dribble per game reduced because he is too predictable. He either dribble to know end, take a shot wen there are better option to pass to, or pass to ozil. All a defender need is mark ozil, or force sanchez to play an unyielding shot.

Or Barcelona, for that matter

Thought about the goals spread: perhaps this is especially effective in a psychological sense in a knock-out tournament, moreso than in a league.

Being so unpredictable that fellow teammates will lose track of what’s going on: Arsenal’s specialty. Sun Tzu did say, to confuse your enemies, you must first confuse your friends.

7 AM Kickoff is great, but 7am (EST) kickoffs are the worst.