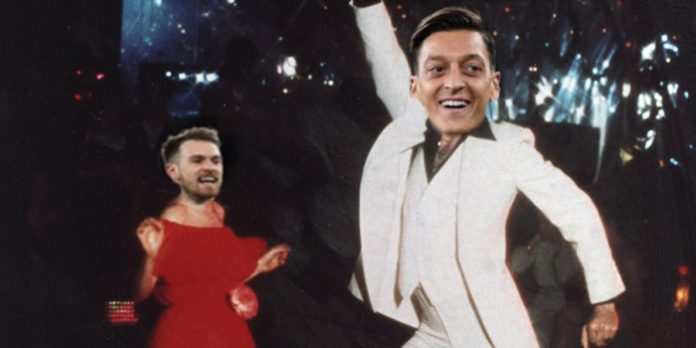 Arsenal fans will be watching their team play Saturday night football in the future as the Premier League has announced its new packages for which it will be seeking bidders.

The next round of rights come up for auction in February, and will likely eclipse the then record £5bn + deal secured for the last round between Sky Sports and BT.

There will be an increase of 32 matches made available for live television, with 200 games as opposed to 168 in the last round.

Notable is the fact taht there will be eight matches kicking off at 19.45 on a Saturday evening, and the fact that the traditional Sunday game – which almost always started at 16.00 – will now be played at 16.30.

The details of the packages to be bid on are as follows (via BBC) – and they’ll be applied from start of the 2019/20 season (assuming we’re all still alive).

While Sky and BT are expected to remain in pole position to retain the rights, it’s expected that there will be competition from less traditional sources with industry insiders expecting possible bids from Facebook, Amazon and other online platforms.

It’s an ongoing question as to whether this competition makes life better for consumers, and in reality it generally means more expense as different subscriptions are required.

With viewing figures and attention spans falling, it might well be the Premier League is reaching some kind of ceiling when it comes to how much people are willing to spend on it, so they’ll be keen to set more records with this new deal.

The fact that so many people are willing to sit through sixty thousand and three pop-ups just so they can have a stream that isn’t half-covered with ads and fake ‘X – close this ad’ buttons really should tell them something.

Check out this week’s Arsecast discussing Borisov, a back four and lots more

You mock these live streams but through those pop-ups I’ve met so many hot housewives who live in my local area you wouldn’t believe it.

So true, also my computer is more efficient than ever. I always have latest version of Adobe Flash player.

Me too! I have been helping lots of researchers with my surveys.

Props for that hilarious and disturbing gif, blogs. ?

Was streaming the Burnley match on my new girlfriend’s work laptop recently when I noticed some moaning. Didn’t realize a new window had opened. I won’t describe what I saw when briefly switching over before quickly closing the window but suffice it to say it was awkward.

Why can’t they just do Arsenal digital membership that includes all our games? It’s stupid that we have to pay to watch other teams. I want to pay money to my club to watch every game online. Is that so difficult? I don’t want to have to pay to both BT and Sky. Sky had our game vs Spuds and nothing since till Christmas. How can you justify paying a subscription for that? No games in over a month. No wonder many people stream. Not to mention 3pm kick off or games that are not televised which should be a… Read more »

Maybe if Amazon or Facebook purchase the rights then you might see a change like that. Honestly I just hope sky and bt don’t get it so that we can see those cunts’ slow decline. Absolute pricks!

Because i love to watch Sheffield v Bristol obviously.

Seriously the amount of times i have been stuck watching a dodgy stream and it ruins the game because of constant buffering or from being 5 minutes behind :'(

Missed all 3 of out goals v Chelsea last year.

The government screwed this up so no one could have a monopoly on games shown. This has led to it now costing billions twice as much to watch games. I still have my Sky but it’s less useful now without Europe and loads of PL games. I think BT Sport is the better now as an Arsenal fan. But yes a ‘seasons pass’ for your team just seems so obvious. But I guess they can’t work out who will pay for it. Does Sky take the money or BT? They want differentiation and the FA don’t want to do it… Read more »

Damn I didn’t realize how difficult it was for people in the UK, for me in Canada I just have the sports package and 3 extra sports channels and that covers all tournaments, including bundesliga, serie A and Ligue 1.

And @NelsonCOYG, I’m not gonna feel sorry for you that your illegal online stream is poor quality, lol!

Why can’t you just buy the games, as you do with a movie, on a one off basis, I don’t want a subscription to watch a load of other crap, just the Arsenal games will do for me.

Yes women and gay people hate football…. have you ever been to an actual match of football ever?
Stay in your cave

You missed the point completely. It’s about the people that follow the reality drivel on TV rather than the relatively small percentage of women, teen girls and gay men that watch (support) football…

You’ve missed the point in both your responses. What’s to say that heterosexual men/boys don’t want to watch talent shows as well?

No i didn’t. Although there is a proportion of heterosexual men/boys that watch that drivel, it’s a tiny percentage compared to the homosexual viewing numbers (probably a larger number but a much smaller percentage).

This is abject nonsense, offensive stereotyping of the very worst kind

“of course any gay sons”

Please don’t do that again.

Are you suggesting that Reality TV isn’t a big draw for many gay people?
All the ones I know are addicted to it…

Seriously doubt you know any gay people. Go find a rock and crawl under it. The world is passing you by and you don’t even know it.

With my trusty Mobdro app, who gives a hoot about who got the game rights.

So, eight Saturday matches for which I don’t have to get up before the birds. Although with my luck, I’m sure Arsenal won’t be in a single one of them but will instead will get every 4:00a and 4:45a kick-off for the whole season.

I for one won’t be giving these tossers a penny.

You must be using the wrong streaming sites, Blogs.

I wonder what MOTD think of this. This is going to bugger up their scheduling… No doubt it will be the big games on at 19:45 on a Saturday night. Maybe they will have to feature it on Sunday (which would probably not be good), or have it on later in the programme? I seem to remember them having games on after 11pm when they were at 5pm or something? Can’t remember exactly what time, but think that was only MOTD2? Keeping more people indoors on a Saturday night is no bad thing really.. but having a drink in the… Read more »