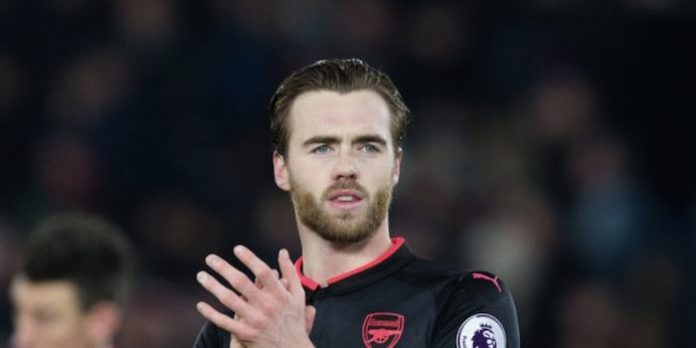 Having made his first Premier League start for Arsenal since the opening day of last season, Calum Chambers has declared himself pleased to be back out on the pitch for the Gunners.

The 22 year old signed a new contract early this season, a show of faith in him from the club, and he had a solid performance overall in a back three.

It’s a position he says he feels comfortable in, but also that he can play in a central defensive duo too – the subtext being he’s not a full back or a wing back.

“The amount of games I get, the more experience I get and more nights like tonight it’s just great experience for the whole team really.”

Having had his season interrupted by injury, Chambers is just happy to be given the nod by Arsene Wenger, and to get a full game under his belt.

“We dug in deep and we had to fight for those three points. It’s really pleasing, so I just want to work on that and improve going on from there.”

Hear about Palace, Alexis, Bellerin and lots more on the new Arsecast Extra

Given how little he has played he did fine last night. He will do better with age (22 is young) and experience.

Hope the ‘Holding Chambers’ partnership locks the CB berths up in time.

Can’t keep it in the cell any longer.

I’m definitely taking the credit for that one 🙂

I couldn’t agree more. The two together are more than simply the ‘Sum of their parts’.

Probably gonna get downvoted for this but as much as I admire the individual potential of Chambers and Holding, it’s unlikely that this centre back pairing is going to pan out in the near future. How many top clubs have we seen with both centre halves below age 25? A more realistic scenario in the next couple of seasons is one of them partnering with Mustafi (in a back 4) once Kos starts to wind down… And really you need at least one very good header of the ball at centre back so sorry for Chambers but my money is… Read more »

No guarantees at all. If one comes through that would be great, if both then fantastic. And it’ll take time, they are both too young currently.

He’s a talented player and he looked good in a mostly solid Boro defence last season. I think a shake up in the coaching department could really help Chambers and Holding, and Mustafi too. All could be top defenders who can play out of the back if they get the positioning and decision making right.

Where have you been? Under a rock? Can’t spell?.:D

Give it a rest once in a while eh?

I thought he was decent. And I mentioned this sometime back when the usual simpleton voices were again waxing lyrical about Holding. The player showing composure I felt was Chambers. Showed good strength against Zaha and kept a calm head. Also underrated again was Mustafi. He adds more power to the back but his distribution from deep can be good as evident in one sumptious delivery from the back that found Bellerin straight in on goal. BUT the organisation in front of the defense can be shambles. That can be sorted with Jack and Granit likely to have to get… Read more »

A man who insists repeatedly that Chambers is a full back/wing back & who has just heard the player himself confidence is wrong should be very careful about throwing around the word simpleton…people in glass houses & all that.

caligunner
Reply to  Kwame Ampadu Down

Hard to believe he’s still only 22. Given his position, Kos’ injury issues and Per leaving soon, CC might be the single most important young player we have moving forward. If he can become consistently above average, our path to being a solid defense becomes a lot clearer.

BOTH Holding and Chambers are 22yrs.

BOTH have great potential for the Cback role.

BUT Mustafi and Koscielny are clearly more experience.

Cback options are there.

But still a lot of system issues that need to be resolve. I dunno what Bould does but we have massive lapses in concentration.

He seems like a really good player – and if you seem like a good player in Arsenal’s defense, then you probably are a hell of a defender.

Could be one of our most important players in the next season – so we should make sure he’s getting minutes under his belt in this one already.

Unless we shock the globe and sign a couple top defenders this summer I agree- He and Holding are going to be crucial despite all the emphasis always placed on attacking players and DMs.

Loves me some Taylor

Chambers is not Arsenal quality.
He found his level at Middlesboro on loan and should have forced a permanent move there – it is clear he is a Championship level player and will cost us far too many goals until his confidence is completely shot.
Arsenal need top quality in defence with established international players, but we know that the BOD will not sanction that level of spending and to be honest I have no faith in Wenger’s ability to find the players we need.

You are clearly unhappy about something. You should spend lots of money until you are happy.

Blogs still doesn’t get it. Heatmap doesn’t show you anything. Watch the last ten minutes of the game and Bellerin was constantly caught ball watching on his flank with Zaha and company continuously cutting behind him to the byline. At least 3 dangerous crosses were put in which could have easily resulted in goals. It certainly put us under undue duress for the last ten minutes and the pressure eventually told with the Tomkins goal and the nervy finish. Bellerin was shockingly poor through the game but particularly closing out the game DEFENDING which is his primary duty. I’m not… Read more »

The heatmaps illustrate very clearly that Bellerin, while he did have some issues defensively, was working the length of the pitch without the kind of support he might expect. And when you consider how effective he was from an attacking point of view, it shows he’s not as terrible as you and others keep saying.

I hope you know that when a team deploys a 3 ATB formation, the wingbacks are required to push forward to provide width? If not the attacking play is going to get stunted. Arsenal want to play attacking/posession football, that requires defensive sacrifice and some risk taking. I’m sorry a wingback can’t necessarily be in the right position all the time when he is instructed to push up, and a misplaced pass from a teammate, not the wingbacks fault, immediately forces you in a vulnerable situation.

If you’re expecting an Arsenal wingback with a back three formation to have defending as his primary duty I think you’re the one who doesn’t get it.

It helps to understand the game before watching a match a match multiple times. The clue is in the titles ‘wing’ back vs. ‘full’ back. Spare us the ill-informed, self-obsessed, diatribes please Santori.

VVD cost £75m. It’s true that Arsenal probably won’t spend that amount on a defender. If that’s the market then I have no problem with the manager blooding in young CB’s like Chambers & Holding.
Kos clearly needs a little rest, so give it to him. Wenger is worried that the young CB’s will cost goals but Kos is in patchy form atm and does not look like his assured self so give the youngsters a run out.

Everyone seems to talk about how we need to improve our squad to compete, but my only question is what position do we buy in? We’ve bought chambers and holding for the future CB pairing. Bellerin is supposed to be our RB for many years to come, and i assume the same is expected when we signed Kolasanic. We have Ramsey and Xhaka in the midfield. (i hope we replace Xhaka). Hoping Ozil signs a new contract the only spot we have left to replace is the LW position since Alexis is leaving. And we’ve just bought lacazette as our… Read more »

Not sure I agree. There’s scope for massive changes/additions to the starting line-up in the summer. Both starting wingers are up for grabs if Alexis leaves (we can definitely improve at RW over Walcott, Welbeck, Iwobi or an out of position Jack). That’s pretty huge. And like you, I also would like a new DM (but I don’t think we’ll be seeing that anytime soon). We may be in the market for a new experienced CB to replace Kos/Mert. It’s not realistic for Chambers and Holding to be first choice partnership next season (or probably even the one after), even… Read more »

I could never understand why AW kept trying him in the fullback position when it was obvious his pace is not suited for that. At the same time he shows ability when he plays more of a positional role that does not require a lot of pace. I think he may be a good replacement when Koz slows down.

When was the last time AW played him regularly at RB?

38 Big Games in the Premier League. Every one of them is worth 3 points.