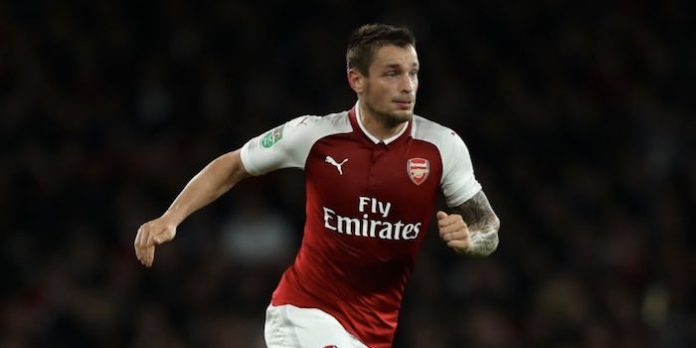 Mathieu Debuchy says he’s hoping to leave the Emirates in January having proved his fitness and form in six cup appearances for Arsenal this season.

The France international has been banging on about moving to pastures new ever since he was usurped by Hector Bellerin as Arsene Wenger’s first choice right-back a couple of years ago.

A combination of injuries and being out of favour have meant the France international has spent a substantial period on the sidelines, although there was a short loan spell with Bordeaux in 2016.

Permanent moves have yet to materialise with Arsenal denying him the chance to join Manchester United and a deal with Nice falling through last summer.

“I want to leave, to find a new challenge in January,” said Debuchy when quizzed on his ambitions for the future. “The fact I’m playing well will give me opportunities.

“We’ll see if there are good opportunities in the transfer window. I’m open.”

Reflecting on his failed return to France in the summer, Debuchy added: “As of this moment, I still don’t know why it didn’t come through. I was really close to Nice

“I met Julien Fournier [Nice’s CEO], and I also met the coach in a hotel in the city. We talked a lot. I passed tests to reassure them, and everything was great.

“I was waiting for them to get back to me, but in the end they never did, not even a little message. I was very disappointed with that attitude, especially from Mr Fournier, but I’ve moved on and it’s allowed me to play very high-level games with Arsenal again.”

Debuchy has another 18 months left on his current Arsenal deal, it remains to be seen whether the club will let him move for a nominal fee. We suspect the player’s wages have often proved a stumbling block when opening negotiations with interested parties…perhaps he’s willing to take a cut this time? We’ll see.

Opens the door for Corporal Jenkinson

Jenks is finished. Arsenal fan and all but sadly not good enough.

I prefer anyone to Bellerin at the moment.. He has been that crap

He could have played more yes, especially since Bellerin has been a bit hit and miss, but his argument is he has played somewhat well in just 6 games?

Can’t really blame him. The last few games have shown he clearly still has something to offer. Ideally, that would be with Arsenal, but ask yourself honestly; would you be happy to just sit on the bench and play occasional Carabao games with the kids? Maybe you would, but most ambitious footballers of his age would not.

Of his own making. If he kept his head down and kept that flappy hole of a mouth closed when he lost his position in the team, he’d probably be first choice RB this season.

Can’t wait to see the back of him and use the funds on someone who wants to wear the red and white.

The double standards around Debuchy and Perez are unreal.

Somehow Debuchy, a first choice player who sustained pretty awful injuries playing for us, lost his place to a young upstart and had the temerity to complain. He’s now disliked by the fans, despite still clearly being a good footballer. Perez, never a first choice player in any position spends a season whinging and getting sustaining eleven (!!!) small injuries and the fans feel he’s been treated badly.

I wouldn’t expect some great funds flowing in from selling him.
We can save his salary, of course, which is reported to be ~70k, but nowadays you cannot attract any top palyer with payment in that range.

Seriously, he was only collecting his play check while injured and recovering. Once, he is actually fit to play he wants to go somewhere else.

If he had concentrated on playing, there would have been good chance for him to get ahead of Bellarin, who is in poor form and needs to get out of the comfort of knowing that there is no competition for his position.

The guy has suffered with injuries, yes. But let’s remember – When he joined, he was the first choice RB in the France national team! He’s not a BAD player.

In fact, on FORM alone this season, I would argue he’s been BETTER than Bellerin, who has been really bad. But obviously, if Hector can sort himself out – and avoid Barca’s inevitable advances, he could be our RB for the next 15 years!

You are spot on here.

We need him as back up to Bellerin so i would keep him until the summer unless we can get a replacement in January. As of right now we’re still in four competitions with plenty of games coming up, so it’s not as if he won’t get more games.

Good form from debuchy. Hope he gets a good deal.

Just when people had started to warm up to him again…. in all the injury/Euro 16 loan drama we’ve forgotten that he was an excellent combative RB when we bought him. I wouldn’t mind him staying as back-up to Hector, maybe even as a challenger. Maybe we’ll go sign a genuine RB/RWB instead of playing people out of position>?

A goal the other day … Wenger probably remembers his name now. Don’t tell me that doesn’t count for something. Y does he want to leave when his Arsenal career is only just starting.

I don’t think we can afford to let him go and certainly not for a nominal fee.
He’s still a very good player who actually fits with us playing a back-four better than Hector.

How about giving him Belleriens place ? The young Spaniard could benefit from learning from a master of his craft his defensive positioning is often bloody awful his crossing and final ball appalling if he works on his flaws while learning from Debuchy for the rest of the season he will be a far better player for the experience

I will be sorry to see him leave, he is a better player than Bellerin and should be our first choice. another example of Wengers misplaced loyalty towards certain players.

Inlury’s apart, his attitude hasn’t been exactly positive. He should use the rest of the season to put pressure on Bellerin and in doing so should/could get into the French squad.

He has the ability, has he got the will and determination?

He has no chance in the french squad. The stubborn donkey of Deschamps already has his squad in in mind.

We should keep him until the Summer, there’s life in the old dog yet.

But we do need to address RB/RWB in the Summer (along with 100 other things). Bellerin needs some real competition to keep him on his toes.

I despise Bellerin since his Barca tantrum. Keep Debuchy, flog the mullet.

Typical debuchy- he has two decent games for us, then doesn’t want to build on that in attempt to get a first team role, he goes shooting his mouth off about a move. Hasn’t this backfired on him twice already?

finally puts in a few good shifts, gets on decent terms with the supporters, and then runs his mouth saying he is ready to leave. same old same old with this chap.