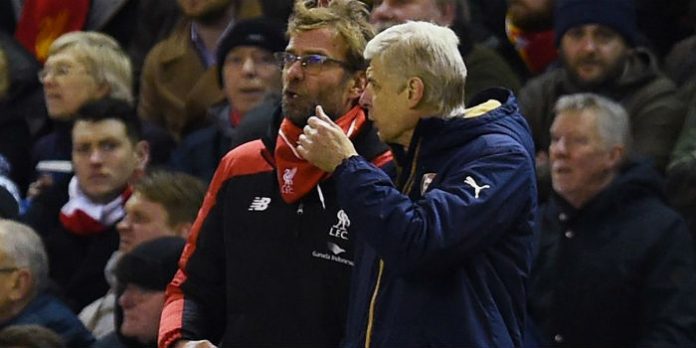 Arsene Wenger says Jurgen Klopp’s rotation policy means it’s difficult for him to predict Liverpool’s line-up for tomorrow night, as he considers which defensive system to use.

The Gunners have used a back four in recent games, but given the Mugsmashers offensive potency the return of Shkodran Mustafi could see the manager shift to three central defenders.

Speaking to the Evening Standard, Wenger said, “I believe that Liverpool is very good going forward so you need overall a good defensive performance.

“I have to analyse that well and you have to guess a little bit who will play. It is not always the same – it depends on their personnel.

“They have plenty of offensive players and looking at them recently, they have changed a lot their teams so it is difficult to guess.

“The fact we are adaptable to both systems means it will be down to me to make the decision.

“Do we play in a four or a three or a five? I have some more time to think about that.”

Wenger’s other decision is who will play at left back or left wing-back, Sead Kolasinac or Ainsley Maitland-Niles. Or Nacho Monreal. Or David Ospina.

We’re kidding about the last one. Mostly.

Bring back the Santos

We used 3 at the back against them the last time and still got mullered. Not only is it about the tactics and attitude of the WHOLE team, but 3 at the back also leaves a 2-man midfield, of which once is Xhaka. Without the legs of Ramsey, a Xhaka-Jack midfield will get overrun. Personally, I’d go with either a 4-2-3-1 with Xhaka and Coq in the midfield base, Jack up top and Ozil our wide, or a 4-3-3 with Jack and Ozil as the 2 CMs, but Coq as the DM (I would’ve preferred we at least tried AMN… Read more »

Too Drunk To Be Offside
Reply to  Faisal Narrage

To be fair Wenger has a hard time figuring out tactics against most oppositions these days.

Best to atleast brush up on the excuses in case of a defeat. Stick with the all time classics like – The ref did it, or they played anti-football, or the grass was too long, or they have too much money.

Coq is injured so xhaka, Jack and Ozil were rested and will play in a 433, i think.

At the start of the season Xhaka was the hub of the team and Liverpool pressed the shit out of him. Then we started bypassing Xhaka and the CBs were passing it directly further forward but then Manure came round and started pressing our CBs as well and that broke down. So literally, it’s anyone’s guess what we do now – but I don’t think we will have the same problems as last time – probably a different set of problems.

Have we beaten Klopp’s Liverpool yet? I think it’s all been draws or losses since he came in?

I had a good feeling abt united game.

If I am the coach, I know who not play in this game. I won’t play xhaka, I will rather play Niles in his position and allow other to help sort out the defensive problem. Xhaka is slow and clumsy. Playing against a fast and high pressing team is a risk too big to take. But quite unfortunate, I am not the coach.

Too Drunk To Be Offside
Reply to  bigj

I was about to say what a stupid suggestion playing Niles in Xhaka’s position was. However then I realised that all things considered it would at the very least be an upgrade.

I am fine if Wenger goes with 3 at the back but switch to a 3-5-2 giving the midfield the extra body. Give a bit more of a defensive shape, allow us to control midfield but still give Liverpool’s backline something to think about with two attackers.

Liverpool’s pact wide players would absolutely destroy us if we did. In that system, the absence of forward wide players means the two midfield wide players have to push on more often. This means more control of midfield, and two up top, but lots of space to exploit on the sides at the back. I wouldn’t fancy putting this burden on our defence, it is very risky and we should set up more to help them combat one of Liverpool’s chief strengths.

Long shot but what if we bid some serious money for Mane?

I know what you are thinking but he’s clearly behind Salah in the pecking order. They seem to go Coutinho, Firmino, Salah mostly.

“Look Mane you are guaranteed 90 minutes here every game ”

Stranger things have happened before in the market.

90 mins? Wenger doesn’t sign players to play 90 mins! Also coutinho might be going soon so they would be reluctant.

Can we actually play 3 at the back, even with Ramsey’s mobility we were over run in the first 10 mins against Manure. So with Wilshire is it possible?

Having said that, we’ll have a similar problem at midfield, playing with a back four.

Feel like this is not a game for Xhaka, Liverpool will press and harry, attack with speed.

Seems to midfield is a tougher decision and will decide the formation.

When we initially deployed the back 3 last season it really did make a huge difference. We looked more pragmatic and everyone seemed to increase the defensive awareness by being forced into a new team structure. Of late, there are some very worrying signs with the 343 formation. 1st which is hard not to notice: Koscielny and Bellerin look really uncomfortable in possession. Every time they have the ball I feel like we are in trouble. Kos will spread it wide, Bellerin will be stuck on the touchline, while an on-rushing opponent gives him little time to react. In a… Read more »

We have a defensive system??

I think 3 at the back has two pros: – gives extra defensive strength against an attacking-minded team – “solves” the problem with our two injured midfielders, as we need to use only two. I am pretty certain however that Wenger will use 4-3-3. Last time when he switched to 3-4-3, he was also in the beginning using it to try to puzzle opposition managers (“will I play this or that – I don’t know, but what does it mean?”), but in fact played his new system in every match, against any opposition, big or small. Now seems we are… Read more »

lol, anythings difficult for wenger these days as he gets more and more senile, we could win ten nil, or we could loose ten nil, either way it wont make much difference to our season, so im not bothered about what the score is

We need more midfileders vs poll , thwr will press us like mad and with only 352 xhaka will lose the ball many times and we will be forced to make mistakes. And with 4 3 2 1 we will have more time on ball as ozil comes deeper to start the attack with xhaka and jack can beat his man we will have more chances. I am not sure about iwobi but he is working hard and hellping the defense. Also i think salah cuting inside to.shoot evwry time he has the ball or.deibile.inside will work in niles.favour to… Read more »

its not hard to fool wenger these days

I would not mind seeing both Monreal and Kolasinac on the left, because Salah is by far Liverpool’s most important threat–you have to make sure that he is forced back to help deal with Kolasinac and Alexis. I would not be shocked to see Walcott come on (although he played on Wednesday and was poor) because Liverpool’s defenders would have great difficulty coping with his runs. So, an unsurprising starting formation: Bellerin Kos Mustafi Monreal; Jack, Xhaka, Kolasinac (three left footers, unfortunately), Alexis, Lacazette, Ozil. The big advantage: all our available best players on the pitch. If we can get… Read more »

Whatever formation we decide on, let’s just make sure we are solid defensively.