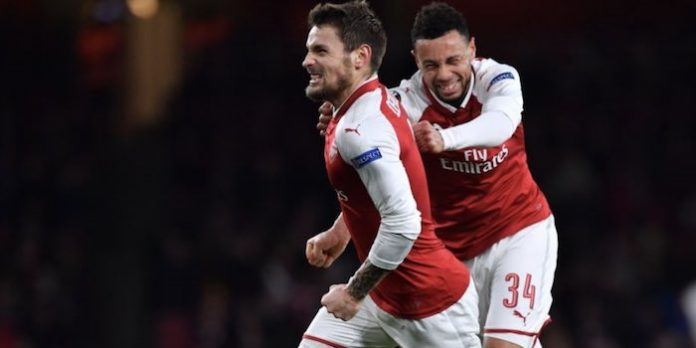 Arsenal finished their Europa League group stage with a flourish as goals from Mathieu Debuchy, Theo Walcott, Jack Wilshere, Owen G’Oal, Olivier Giroud, and Mohamed Elneny gave them a 6-0 win over BATE Borisov at the Emirates this evening.

In front of what was the smallest ever crowd at the Emirates, Arsene Wenger shifted formation to a back four, deploying Debuchy and Maitland-Niles at full back with Holding and Chambers the central defensive pairing.

The Gunners had the first chance on goal, with Mohamed Elneny scuffing a shot against the post in the second minute, with Ivanic cracking a shot over the bar in response.

It wasn’t long until the scoring was opened though and it came through an unlikely source. The ball broke to Debuchy after it looked like Walcott had been fouled in the box, and the Frenchman cracked a low rising shot beyond the keeper and into the far corner of the net. 1-0.

Maitland-Niles crossed for Giroud who headed over under pressure, before Volodko picked up a yellow card for a crude challenge on Debuchy. The Borisov keeper came out of goal and denied Welbeck after he’d been put through by Wilshere, and he had to be alert to prevent an own goal when one of his own chaps headed back towards his own goal that wasn’t an own goal, if you see what I mean.

The keeper was excellent again coming out quickly to save with his feet from a point-blank Walcott, and the England man tried his luck from a free kick, shooting low and beyond the far post.

The 28 year old didn’t have to wait too long to get his goal though, firing in from close range after Welbeck ignored him, overran it, and then saw the ball deflect into his teammate’s path. 2-0.

Walcott was then denied a second by a superb clearance off the line by Steve, and the keeper pulled off another good save, palming a Wilshere curler over the bar. He too wouldn’t have to wait long to get on the scoresheet, picking up a pass from Walcott, stepping inside the defender and lashing a shot across the keeper and into the net to make it 3-0, a lead the Gunners took into the break.

There were no changes at half-time, and just six minutes in the lead was extended. Wilshere set Walcott free down the right, he took it on, and his low cross – which was aimed for Welbeck at the back post – was turned into his own net by the defender to make the score 4-0.

Welbeck seemed determined to get in on the action, cutting inside and slamming a shot on target which the keeper saved with his face. Giroud curled a curler over the bar, and then Arsenal were awarded a penalty when Walcott was fouled by Fred.

Giroud stepped up and put the ball in the net but was made retake it by the referee because of encroachment. He made no mistake with his second attempt, and although the keeper got a hand to it, he couldn’t keep it out and it was 5-0 Arsenal.

Some Borisov lad whacked a shot over the bar, Chambers blocked another shot, and then some other fella got a shot on target but it was straight at the unworked Ospina. There was another chance for them at the back post, before Arsene Wenger made his first chance, bringing on Reiss Nelson for Walcott in the 70th minute.

Elneny made it 6-0 with a beautiful curling effort wuth 74 minutes gone, lovely work from Wilshere set up the Egyptian and the finish was first class to provide him with only his second goal for the club. It was his last action of the night as he then came off with Welbeck to make space for Joe Willock and Eddie Nketiah.

Some bloke shot wide with Ospina scrambling across his goal, another chap spooned one over the bar in a manner which suggested he’d made his own spoon hewn from a piece of wood he’d found beside a lake, and the Arsenal keeper had to make a save at last as the game entered 2 minutes of injury time.

In the end Arsenal’s biggest win of the season, and we now wait until Monday to find out who our group stage opponents will be.

I finally saw motm Jack Wilshere as captain of the Arsenal ❤ now can we please start Wilshere instead of xhaka !!

Kwame Ampadu Down
Reply to  goongot

Jack & Rambo ? Seriously ? I like them both but that is asking for trouble.

Wilshere-Ramsey would be fun to watch. Especially with a dash of Ozil magic thrown in. Put the Coq on to protect the defenders and give Xhaka a place on the bench.

Jack earned a place in the starting XI tonight.

Santori
Reply to  Kwame Ampadu Down

Granit is still very good launching attacks from deep and I felt was decent against Pogba.

Ramsey if anything should be playing the Ozil role but for fact that Ozil is finding form.

All good options for midfield.

Whether Coquelin can play a deeper role supporting Jack who can also release the ball quick but from higher up, is the question.

Maybe the midfield options in deep midfield are either Granit Ramsey or Coquelin Jack.

Am I seeing things or is Jack not by far, head and shoulders the best English midfielder of this generation?

Kwame Ampadu Down
Reply to  nketibag

I love Jack but I think the only way you can get him in the team is to play him with Coq in the middle. To do that I think you would have to go back to 4-2-3-1 & play Rambo on the right like we did in second half of 14-15.

Southgate is an amateur.

Dies things by the book.

If Ospina was a surgeon.. he could’ve performed an open heart surgery today..

He could’ve gone for a dump, it wouldn’t have mattered

A Different George
Reply to  mrtanmay

He had to put his book down in the last few minutes, just when he was getting to the exciting part.

Lucky he was wearing a bright colour. I even forgot he was on the pitch.

That’s Theo Walcott playing for his new contract right there.

Thats Danny Welbeck playing to get sold in the summer.

Welbeck was aweful. First touch is probably the worst from any footballer I know. He needs at least 3 touches to control the ball. He can’t dribble and always overrun the ball.

I know, he was brilliant. Just like last year when he scored 19 goals in a season? Oh no he was shit then, overpaid git.

Red-Wing
Reply to  Ox in the Box

Did I offend someone?

That would make my day. Even more than tasty dried bananas that I’m treating myself with. Mmmmm, bananas.

Just to be clear – I love Walcott, he has been one of my favourite players for a long time, to a degree where I would be more than happy to see him get a chance in the first team again. My comment was no criticism of him.

Anonymarse
Reply to  Ox in the Box

Do you have pictures of him on your bedroom wall?

SizC
Reply to  Ox in the Box

“Oh no he was shit then, overpaid git.”

…you show your ‘love’ in a weird way!

Sarcasm is difficult to read. My bad.

SizC
Reply to  Ox in the Box

19 goals in a season would only be dismissed by an armchair expert!!!

Did Sanchez not play for his new contract last season? Walcott is the most hated arsenal player. If he perform woefully, he is not suppose to be on bench. If he score and perform, he is playing for new contract. Lets see welbec too play for contract renewal

“another chap spooned one over the bar in a manner which suggested he’d made his own spoon hewn from a piece of wood he’d found beside a lake” probably the single greatest sentence I’ve ever had the privilege to read.

A Different George
Reply to  GiroudsBeard

Actually Ospina wrote that while he was in goal today. Had time to. In longhand. On a yellow pad. With a fountain pen.

Nice goals. Even the OG was a fantastic finish.

Credit where its due..Walcott had a good game. I liked that he passed the armband to Jack who had another productive game. Niles is pushing the currently below par Bellerin and Kolasinac imo.

this Owen G’Oal dude should get more chances. Quality finish!

Will Nutaif play against the next group stage opponent? What do you think blogs?

Welbeck looks so much à better footballer than and yet.. Stats.

Theo had a good game. So happy to see Jack score a goal and given the armband!! Happy times

Just how much better this second arsenal team play when they play 4 at the back? Its a shame they didn’t start earlier.

Would like to see Debuchy feature in the PL at some point in the season.

He’s quality.whilst we have him, may as well make use of him for all the wages paid out already.

Group stage opponents? Are we going through another group format?

Good grief Blogs, you got that report out almost before the final whistle – genuinely impressed…

I love Elneny’s enthusiasm. Always bouncing around like a five year old on a jumping castle. Super fun goal!

Something about Arsenal master bate. Use it (again).

I was a bit puzzled by the penalty re-take. There was certainly encroachment, but it was by the defenders. I think the referee just wanted to see if Giroud could do it again. The other puzzling decision was near the end, when Jack was bowled over just outside the area, with the referee about two yards away and didn’t whistle. I assume he had a train to catch.

arsepedant
Reply to  A Different George

If you watch it again, you’ll see someone (I think Debuchy) was almost level with Giroud when he took the first penalty.

A Different George
Reply to  arsepedant

If (a) Giroud had missed the second time AND (b) the goal had mattered, I would have watched again. As it was, I thought (apparently lame) humour was in order.

Wilshere MOTM for me, and Walcott, Holding, and Chambers were all excellent. Welbeck seemed far off the pace, though, and had the touch of a donkey throughout.

Still a marvellous job by the team. Just need to cut out the occasional calamities in defense and we’ll be awfully hard to beat.

Welbeck didn’t have a good game but still made the keeper make a couple of decent saves.

One decent effort but held the ball too long or elected to have a go when better options in teammates were available. Touch was erratic.

Giroud showed him how to do it.

I would love to see a Wilshere-Ramsey pairing in midfield. Throw in a little Ozil magic, and it could get interesting.

Loved the way we played in tight triangles around them slicing them like a hot knife through butter.

Stats look almost similar to against United but this time we came away with just desserts.

Lowest turn out ever to see our top score of the season. Good old Arsenal.

Debuchy.
Good to see him play well. We need him on form so we can give Bellerin a deserved break.

That Wilshere pass tho