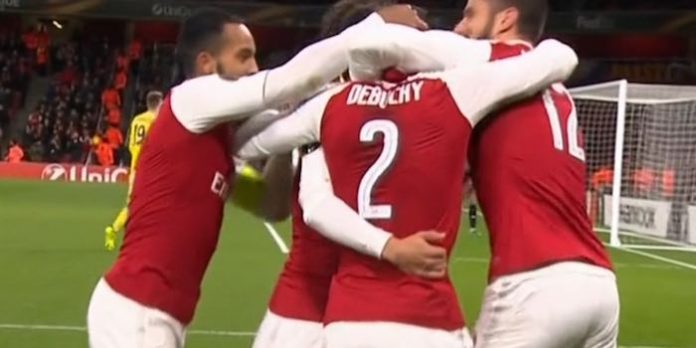 Arsene Wenger says praised the character of Mathieu Debuchy, saying he has great respect for the former French international after a difficult period of his career.

He joined the club in the summer of 2014 from Newcastle to replace Bacary Sagna, and looked to be a canny purchase but since then he’s been beset by injuries and some personal issues.

Two significant layoffs in his first campaign opened the door for Hector Bellerin to stake his claim to the right-back spot, and the Spaniard has hardly looked back since.

Debuchy asked to leave on loan so he could get game time ahead of Euro 2016, but picked up an injury while with Bordeaux. Last season he played just 16 minutes of first team football because of injury, but last night, after scoring a cracking opening goal for the Gunners in the 6-0 win over BATE Borisov, the manager gave him his backing.

Asked about a possible January move, Wenger said, “He is under contract. His future is down to his performances now and I opened the door for him many times because he didn’t play and because he has Bellerin in front of him.

“We have as well Ainsley now who can play right and left, but I consider him like anybody else and I must say I have a huge respect for his professional side and how much he did fight to come back to the top. He’s a tough, tough guy. Tough worker.

“I’ve said many times in this job you can never give up, no matter what happens for you and always be ready in case you’re needed.

Back-up to Bellerin has been a concern and it’s unclear yet as to whether Debuchy can operate as a wing-back, but in a back four he showed he can still do a job – albeit against somewhat under-par opposition.

Great hit for the goal too – see all the goals and read the match report from last night.

There was a young man named Debuchy, who only eats peas that are mushy, they say he’s quite tough, but the peas aren’t enough, I suggest he chows down on some sushi

Last night was like watching the expendables.. Of only welbeck had scored

One good effort but use of the ball left much to be desired. Often he attempted to be selfish instead of laying off to a better option in a teammate and he held the ball too long.

Also his touch is erratic. It can be sublime but more often than not loose.

There was a young man named Debuchy, who only eats peas that are mushy, they say he’s quite tough, but the peas aren’t enough, I suggest he chows down on some sushi

Sorry, you heard me the first time.

Bellerin not only needs backup, he also needs competition. He seems to be stuck at the same level for quite a while and it is below his best.

Yes he needs to work on his cross and also at times seems to be caught in double minds . He gets in good positions only to be let down by his final ball. Both debuchy and jenkinson are better in that department. I would like to see rotation between hector and debuchy will work well for bellerin and give him some break.

Jenkinson was rubbish with crossing.

Only reason why you think he was good is bc media were walking to his crossing since He’s English.

He whips crosses in blindly and tends to panic, lacked nuance in approach.

Sorry don’t agree at all.

Calm down. The poster said they are better then Bellerin not good in general maybe Debuchy is. That just shows you how much Bellerin needs to improve his crossing.

Arse City Blues…….you must be the life and soul of the party!!!

Far better than our weakness bellerin

Just me who thinks we could put him in as a CB instead of the injured Mustafi this week?

It is an option on right side but I think defensively he may still need a game or two to further sharpen.

Lost track a couple of times of runners behind him and that was against Bate.

I’m glad Debuchy is available and getting up to speed. My opinion had always been if he’s fit we should be using him. He kept Sagna out of the French squad for a reason. He is of course older now and carrying an injury. Whilst he looks to be rediscovering his nuance going forward, his timing at the back may still need a bit more work. But its good even if this is his last season with us, that we have an option to Bellerin as cover. At least on left flank we can push Monreal out wide but Presently… Read more »

Thats if we switch to a back 4. I don’t think he has the speed to play wingback.

Maitland Niles has made a case for himself out left.

He’s very mature for a young man. Like how he keeps all options open before executing his final pass or shot.

Still may have a bit more work to do defensively but he is diligent and doesnt panic.

Certainly making himself one for consideration as back up to Kolasinac particularly with Monreal getting older.

And clearly he could cover on the right, he played RM on loan at Ipswich and did well in that position at a decent level, so basically he has replaced the OX as cover for both flanks when needed. Then I would look at monreal with holding or chambers covering cb. Then I would also look at Da Silva as a LWB option. Debuchy is quality but in reality belongs at a mid table side now.

not related but just read in a french paper that bacary sagna is still a free agent ! I know he is at the twilight of his playing career but sagna without a club it’s a sad end . the market is really crazy…

Take mercenary money you can end up get treated like one. Shame as he was such a great servant to Arsenal