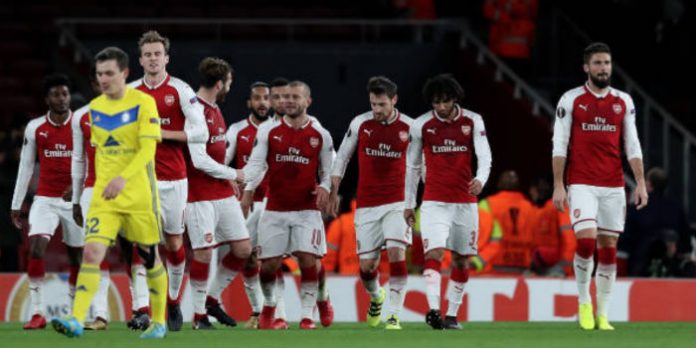 Mathieu Debuchy set the tone for the evening with an early rasping drive before Theo Walcott and Jack Wilshere put the Gunners firmly in charge after the break. An own goal, a penalty by Olivier Giroud and a beautifully curled effort by Mohamed Elneny rounded off the action.

“It was done in a stylish way and in a technically high-quality game from our side,” Wenger told his post-game press conference.

“You can say the opponent was not exactly the level of the Premier League and I would agree with you.

“But you can only do your job and that’s what we did in a convincing way and with a remarkable spirit. We finished the job well in this group stage.”

The only downside on an enjoyable evening of football was the attendance, which is likely to be confirmed as the lowest ever for a first team game at the Emirates.

Given there was nothing at stake on the night and squad rotation was inevitable, the boss stressed that he was not concerned by the huge no-show.

“You respect the decision of your fans. They knew we were top of the group anyway. You could basically expect that.

“Look around at the Champions League last night in game number six. I’ve seen many grounds that were not full and were half empty. That’s a bit the problem of the group stage.”

Good to see them all pushing the first team. Hope some of them keep improving and step up there.

Seems like it would’ve been a fun night out. Maybe a missed opportunity from the clubs point of view to dish out some super cheap tickets. Or even give out free to local schools or something.

Tickets were only 15 quid!!

Thought jack was good last night, some of his passing was brilliant. I know it makes it a bit easier against team like bate but it was still nice to see. I’m looking forward to seeing him in the league soon.

Give tickets away in situations like last night. Better to have a great atmosphere and not make a huge amount of money, than see 60% empty seats and make a stack of cash.

I suppose the trouble is, if the ticket has been sold already, how does the club know who is going to turn up? I do agree though, for these kinds of games, why have such a large corporate allocation – realistically, are those people going to turn out on a game with no consequence at the start of December in the cold? Why not say ‘you know what, were just going to offer these tickets to local schools, residents, and young fans, at say a tenner each’. Build the fan base, puts out a great night for local people who… Read more »

A P
Reply to  Anthony

Your first paragraph explains why the club cannot do what you suggests in the subsequent paragraphs.

Besides, they already sold the tickets so it’s not like they are losing money. It’s a win win situation to give for free seats of people who bought tickets but didn’t show up.

Do you think they would they call the club and say they won’t show up?

How do you know if they aren’t going to show up? Are you going to have 10,000 fans outside the stadium waiting to get in for free? how would you pick and choose who gets what tickets and seats in mass?

Great idea but I think it would be hard to execute unless they call up day ahead that they aren’t showing up?

a good performance by arsenal, because jack ran the show with a man of the match performance, and the best goal of the night, shame only 28.000 turned up to see it, wenger cant ignore jack anymore, he has got to pick him now, got to

A P
Reply to  ronaldo

Yeah, against BATE. That doesn’t really mean much.