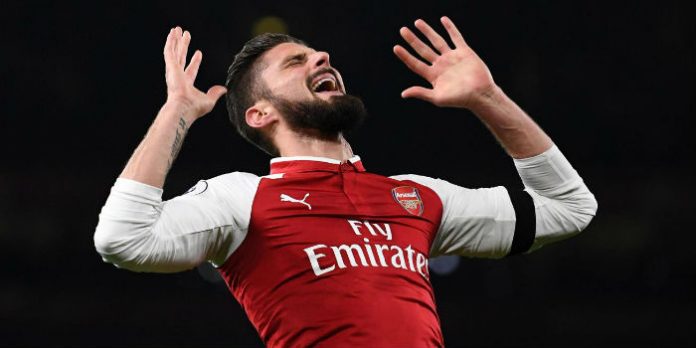 Olivier Giroud has revealed more details about his Arsenal exit, confirming that Borussia Dortmund offered him a more financially lucrative deal but that the birth of his third child played a key role in his decision to stay in London.

The 31-year-old also highlighted that despite his frustration at being pushed down the attacking pecking order by Arsene Wenger, he still holds a huge respect for his Frenchman for doing right by him after six years at the Emirates.

Giroud ended up moving to Chelsea on an 18-month deal on transfer deadline day in a move that saw the Gunners recoup approximately £18 million.

“It was frustrating at Arsenal obviously,” he told France Football. “For a year and a half, it went from bad to worse. I could no longer continue like that.

“I could not bring myself to spend another year at Arsenal and remain a reserve, even a second reserve.

“The future looked gloomy with the arrival of a new striker [Aubameyang]. I wanted to become happier again by playing, so I left – it is as simple as that.

“The easiest solution was to go to Dortmund. Arsenal were happy, Dortmund as well.

“It was the offer most interesting, financially speaking. I have a very good contract at Chelsea but Dortmund really wanted me.”

Shedding more light on the options open to him going into transfer deadline day, he added: “It happened after a game of poker, like in all transfers. It dragged on, I started to get stressed because my third child was born at that exact moment. That was also why I did not want to go to Dortmund.

“Spending four months without seeing him, I do not know how I could have done it. It was why, I needed to take the bull by the horns.

“I went to see the coach to ask him where he was with Aubameyang. I put him under a bit of pressure, like my agent, who I spoke to several times a day.

“It is normal. I did not want to be deprived of going to Chelsea, which was the best solution for me.

“The coach immediately said to me: ‘Don’t worry, I will do my best so that you are happy’.

“On one side, it was normal. I had never asked to leave. On the other, I knew that he would not cause problems given the relationship we had always had.

Arteta: We have decided who will leave on loan

I will always Love and respect both Wenger and Giroud. Classy humans.

Yeah it usually only takes one article like this to get everyone gushing again. Never mind all the hissy fits, blaming refs, totalitarian behaviour, stubbornness, monumental defeats, lack of game management, NLD humiliations, suicidal tactical decisions, repeating the same mistakes over and over…

He does however allow our players to join rival clubs because he’s a super nice guy. I for one am gutted he went to Chelski. Those guys are dicks and it’s only through our own incompetence that they aren’t our direct rivals for Champions League football.

Not really sure selling Giroud to Chelsea was what was best for Arsenal. Obviously it was what big Oli wanted, only favouring to stay in town due to the birth of his son, but still. For me there was always a case for keeping him until the end of the season, especially since we were signing Aubameyang with the knowledge that he couldn’t play in Europe. So Wenger selling him to Chelsea was still a risky strategy even before you factor in what we know now i.e. Lacazettes injury. And even if Lacazette was fit and playing, that’s still only… Read more »

If he was wasn’t sold we would have forsaken the Aubameyang deal.

I like big Olivier but not keeping him at the expense of getting a better striker.

Assuming we all want the same thing, which is to win games. Sadly, we lost plenty with the big fella up top.

He’s always done his best for us so deserves massive respect on his return to the Emirates.

This isn’t actually true. As Giroud said, he only pressured Wenger for a move after Pierre joined us. We could have not sold him or only allowed him to move overseas.

I thought I read it as he pressured AW for info on the Auba transfer. So then he can quickly counter and make a move to Chelsea instead of going to Dortmund. He was leaving regardless but wanted to stay in London for his baby.

‘The future looked gloomy with the arrival of a new striker [Aubameyang]. I wanted to become happier again by playing, so I left – it is as simple as that.’

Doesn’t sound like a player in the middle of a transfer merry-go-round. Sounds more like we made it appear so in order to soften the blow of yet another of our players strengthening a rival club.

@Glasgow Gooner I am not saying that keeping Giroud would’ve guaranteed us any greater success. I was just saying, it was a risky move by Arsene allowing Giroud to leave (regardless of what club he went to) because (at the time) that left us with only one fit striker that could play in the Europa League. And as we knew at the time, and have had confirmed since, the Europa League is going to be our best route into the Champions League for next year. So there was always a case for keeping Giroud until the end of the season.… Read more »

Because both are unselfish, respectful human beings!

Did you not read the story?

Giroud would have sign for Dortmund if it werent for the baby. Newborn arent allowd to fly, that means Giroud has until end of season to see his newborn which is 4 months away. Chelsea gave him option to play, higher wage, stay in london and see his newborn. As a human being, Wenger, Giroud and Chelsea chose what was best for each other, not exactly the fans, but its a win-win.

Giroud would have made more money with Dortmund, according to the interview.

“It was the offer most interesting, financially speaking. I have a very good contract at Chelsea but Dortmund really wanted me.” – I love that phrasing

Giroud must be in the France WC squad, at least as impact sub later in the game.

Be well Giroud and congrats on the 3rd child! I have 3 myself and I know how much work/stress it is.

My wife was really upset about Giroud leaving, says there’s only Aaron Ramsey to look at in the Arsenal squad now….haha.

Wow… My wife was pretty much on the same wavelength –
said Giroud was her favorite player right next to Ramsey. She was more upset than I was about Giroud leaving. I couldn’t tell if I was more proud that she cared or bothered that the two best looking players in the squad happened to be her favorites. I really need to get back in shape…

A Different George
Reply to  poly

More trophies of any kind.

Has a nice ring to it doesn’t it. A picture of Harry Kane with the caption: “Still less trophies…. than Yaya Sanogo.”

Probably has more than the entire sp*rs team

Did you guys know that Flamini is the richest footballer in the world (and he’s saving the planet too, with green energy)? I hope he returns and buys the club from that fucking moustache wielding arsehole.

Orion
Reply to  One Dennis Bergkamp

My hope is that a player like Djourou accidentally invested in bitcoin and is secretly sitting on a fortune now.

matthewn5
Reply to  One Dennis Bergkamp

Who could possibly vote down this comment? Does Kroenke prowl these forums?

That picture and title are robbing the world of its innocence.

but now, ( in your own words ) you are with the perfect team.

Giroud made the right decision for him and his family. 1 Goal and 3 Assists in 3 Games. He seems to do pretty well for them.

I said it before there is a reason why Giroud was picked ahead of Lacazette for France. Stat heads will tell you otherwise but there is so much more intangibles in football. His positioning makes up for his lack of “pace” and his ability to offer a presence in the box, hold up the ball, bring players (like Greizzman) into the game is key. He now gets a chance to feature for Chelsea and a higher profile than Lacazette who is unfortunately injured. We instead are reliant on Danny Welbeck to do the business (plan C then?) since the brilliant… Read more »

Just like he was featured in the match against Barca? lol His lack of pace is the reason why he can’t keep his place at top clubs especially at his age. Positioning does you now good if your club only has 30% possession.

Chelsea were more concerned about keeping a clean sheet, than scoring goals! (Away Goal Rule) If they’d done their homework they’d have realised Giroud is an asset in defence too!

Giroud deserves a rousing reception on his return to The Emirates. I’ll cheer for France in the WC in the summer, a different team in blue.

Oh enough of this bollocks now! He was here, now he’s there. With a happy ending on top. Well happy fucking days!

Looking forward to seeing Aubameyang settling in with us.

it pisses me off to see him play for the chelsky….

As much as I hate Chelsea, I can’t agree with you there. Giroud is a top guy, and deserves to be playing to earn husbands place at the World Cup.

In 18 months, we’ll probably offer him a return deal for a year – full expect to see him at Arsenal again.

was the censorship of the word piss intentional och just a copy + paste?