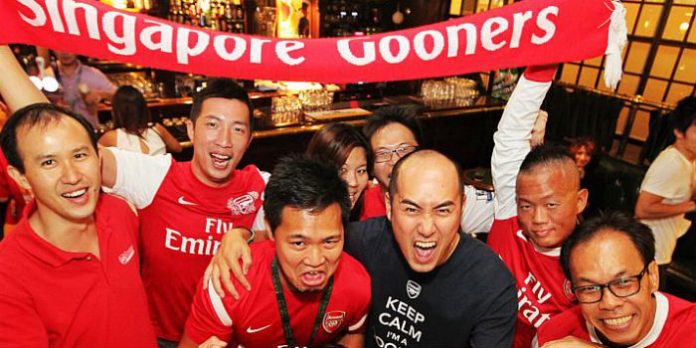 According to local paper Today, Arsenal will play a pre-season friendly next summer in Singapore as part of the International Champions Cup.

The last time the Gunners visited Singapore, in July 2015, Chuba Akpom’s hat-trick and Jack Wilshere’s penalty helped them to a 4-0 win over a local Select XI in the Barclays Asia Trophy.

Next summer’s trip could well pitch Arsene Wenger’s side against stiffer opposition with Lyon and Atletico Madrid rumoured to be on the roster.

Arsenal took part in the International Champions Cup last summer picking up a trophy when they beat Bayern Munich on penalties in Shanghai. The tournament, which seems to have no fixed format, is mostly just a cash cow for a company called Relevant Sports to flaunt the world’s biggest clubs in far-flung places.

Given it’s a World Cup year it’s unlikely that Arsenal will embark on a long tour of the Far East. There are early suggestions that a fixture could be played in Dublin but that’s yet to be confirmed. We’ll keep you updated if we hear more.

Emery: It’s our responsibility to give youth a chance

International champions, not just any champions.

were the current holders…

Need to go Singapore via Vietnam again. See how many people chase the bus this time.

Feel Arsenal have been to Asia too often.

Should make a trip to the Americas, its a big potential market not sufficiently exploited by the club and the American owner.

there’s no real money in south america, but Canada and the US maybe.
though the US failed to qualify for the WC so less interest this cup cycle.
asia’s economy is doing great atm coupled with the population density makes for a more profitable endeavour

Its an untapped market.

It could be a gate way to other parts of the America If the MLS could leverage.

Unfortunate the current regime there have other ideas about immigrants.

US public still largely in their own world but awareness of the sport is on a huge growth spurt with youth.

Arsenal played two games in California last year and are supposed to play a couple in the States this year as well, so I’m not sure what you’re on.

Damn, timing could have been better. I’m in Singapore right now and leaving in June. Still never been to an Arsenal game 🙁 .

Awesome, they are coming to my country!

I am from Singapore too and now live fifteen minutes’ drive from the Arsenal training ground in London Colney. More Singaporeans in Hertfordshire please.

Chelsea trip up at Watford. 6 points to 3rd place. We need to beat the Tots, this weekend and get in the mix for the top 4.

Ha Ha Chelsea! However, our victory over them in the cowabunga cup has been slightly diminished by their thrashings at the hands of Bournemouth (3-0) and Watford (4-1).

YAY ARSENAL ARE COMING TO MY COUNTRY AGAIN!!!

Something about lacking testicles by Deeney…

Sets us up perfectly.

We HAVE TO win against Spurts. It’s a cup final.

Beat them and we are one point off plus a massive dent on their confidence. Should Chelski continue to stumble (say a draw), we will be 3 points off fourth with some games left in it. TOUCH wood.

Smashing the spuds is a must for Arsenal, be it premier league match, cup final or five-a-side football…..we just don’t do friendlies with them noisy lot!

Anyone know a bad lasagne chef?

I don’t see the need of such tours! Money made for the club ends up in Kroenke pocket and extends Wenger’s contract beyond belief!
Arsenal should have the old type of pre season in Europe to fully prepare for next season.
They really need to sit down and talk about this season which has been a disaster.