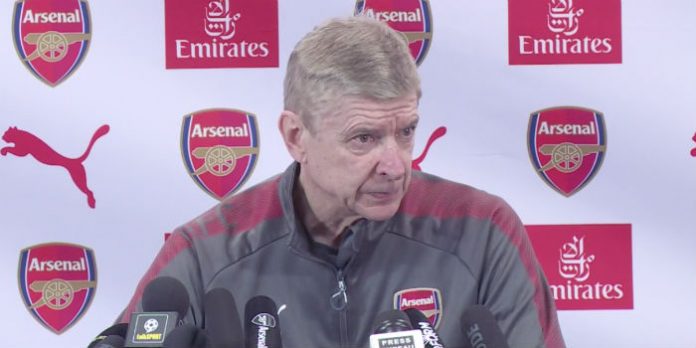 Arsene Wenger insists he does not encourage his players to dive and thinks that penalties should not be awarded to players who are felled as they take the ball away from goal.

Earlier in the week, Sp*rs boss Mauricio Pochettino noted that “football is about trying to trick your opponent,” even though he admitted that midfielder Dele Alli was rightly booked for diving during his side’s 2-2 draw with Liverpool at Anfield.

The comments have sparked yet another debate on a subject that Wenger has touched on many times during his tenure in England and he joked that perhaps native players have taken the act to a new level.

“I’m convinced that he wanted to say tricking your opponent is to be clever,” said Wenger of Pochettino’s comments.

“How far was it an apology for diving, I’m not sure at all. I don’t think he would. In my personal case, no. Overall, I just say we have to get the diving out of the game.

“I remember there were tremendous cases here when the foreign players did it but I must say the English players have learnt very quickly and they may be the masters now.”

Quizzed on whether he instructs his players to go down in the box where possible, he added: “I don’t tell my players to dive. Not to dive, yes. I don’t encourage them to dive at all.

“If you look at the situation, sometimes you do not want to provoke a dive and sometimes you want your players to be intelligent where they play a little bit with the rules, they make more of it on a penalty case. Every striker will do that, they extend a little bit the rules. How far can you go? That’s down to the referees.

“In many cases, it’s like that now, the keeper has his hands off but the striker leaves his leg hanging as long as he can. But it’s not really a penalty.”

Intelligent to talk about prior to playing that lot.

It certainly is, but he was just responding to a question (just like when he says stuff fans don’t like).

Nice bit of mind games there. I would tell the centre backs to not even try to tackle Kane because he is just going to fall over. Concentrate on blocking the shot.

It is perhaps tempting fate to say this but, although he has scored some goals, Kane has looked badly out of form the last few times I have watched him play. Easy to dispossess, poor passing, poor shots (normally his greatest genuine strength). He looked as he did for England in the Euros.

Imagine being an Arsenal defender and seeing Delle Daley Alli running full pace at you! It’s like a mad headrush of cheat. A Hazardian ability to leave a trailing leg looking for contact, any contact. Penalty ref! Did you see that ref? Fuck off Spuds you diving cheating fucks

Media darlings sp*rs are losing this one. Big ups Wenger! Diving is gash

You guys remember the furore that Ferguson created over Pires going down too easily and “bringing that culture over here”.

Then you had Eduardo, which to this day I can’t believe, was charged for diving. I remember both foreign news and BBC/Sky tearing into Arsenal for defending him.

Yes, Eduardo gets out of the way of a heavy challenge trying to protect his recently healed broken ankle, doesn’t appeal for a penalty but gets one. He’s a Villain shouts the media.
At the same time in every game, Rooney was diving to the floor and vociferously appealing for a penalty whenever he was within a yard of a defender in the penalty area. He’s a Hero shouts the media.

Nice bit of anti-Spurs propaganda to lighten up my day.

“I hate diving, but I’m not happy if a player is kicked by somebody in the box and he tries to remain standing.
“It’s very, very rare a referee gives a decision if the player doesn’t go down so I tell players not to be naive,

– some cunt in Manchester

Well he speaks the truth – it’s the reality of the situation and he is being practical. Would you rather our player stay strong and try to keep on his feet and more likely than not NOT receive a penalty, or if he is fouled to ride the challenge and go down (i.e. not do anything to keep himself on his feet?)

You’ll have to narrow it down, there’s loads of cunts in Manchester.

Yep, in Manchester I think the non-cunts are a tiny minority.

There are a lot of cunts in London as well, who travel to Manchester every other week. Ironically they make up the majority of cunts at Old Trafford.

Are you talking generally or just football-wise? Bit harsh if you’re talking about everyone from a single city. The Mancs I’ve met have generally been nice people.

Come on now, there is no place for balanced opinions here, this is a football blog!?

If those Spuds dive, I want our defenders to call them out on it – make a noise, get angry and make sure the ref sees it

If that divey cunt Dele Alli wasn’t English, he would get completely slaughtered for it. Would be labelled a foreign diving cheat but being English gives him a bit of protection from the Sp*rs loving media.

Fucking hell man, give it a rest. Spurs loving media. You guys are starting to sound like Donald Trump

Arsenal player does it – it’s a crime against humanity. Tottenham players do it and it’s brushed under the carpet in a constructed argument about offside. No, no bias there…

The media clearly have their favourites in Tottenham and Liverpool. I’m not sure how shit either of them have to be to receive criticism from the media. Meanwhile, they can’t jump at the chance to stir up shit when it’s to do with Arsenal or Chelsea (not so bad when they’re on the receiving end, TBF).

Because Tottenham are shit. Fuck me how hard is it to get?

Shit team does shit is not exactly news is it?

Laca has had quite a few opportunities to fall over in the box, but determination to actually score on merit prevented a shameless act. I’d suggest Mr. Wengers’ sentiment is quite true.

Those North London cocks – on the other hand …..

We’ve had to play like that for many years as we generally don’t get penalties unless our player is attacked with a machete.

I seem to recall that Henry rarely dived early in his career but then learned the art of deception. Like his infamous handball against Ireland…

Playing for France. After he’d been at Barcelona for a couple of years. Still it was clearly Arsenals fault as i remember the papers telling us so….

As much as we all want him to leave by the end of the season the earliest, one of the reasons that’s holding me back is that this man is one of the classiest, most honest and honourable managers I’ve seen.
I’m glad he doesn’t tolerate this kind of cheating and once he leaves I’m going to really miss having someone of his class to represent our club.

“But it’s not really a penalty” we love you wenger <3. FUCK SPURS

I recall Wenger making similar comments just before matches against divey bastards as a way to put refs on notice; I wonder what the data shows regarding penalty decisions in the following matches?

“The keeper has his hands off but the striker leaves his leg hanging as long as he can. But it’s not really a penalty.”

I wonder what match Arsene was watching on Sunday.

I don’t think there is any mystery to the situation. The weight of views in the media, in column inches, and comments below the line (in BPL-centric coverage at least) seem to be balanced differently depending on whether incidents involved British strikers or not. When Eduardo won a penalty against Celtic years ago, the outrage bordered on apoplectic (Arsenal partisans aside). Kane swan-dives regularly at the merest brush of the goalkeeper’s glove, as have plenty before him, but now supposedly there is “debate” about whether that is a dive and “strikers are entitled to go down.”