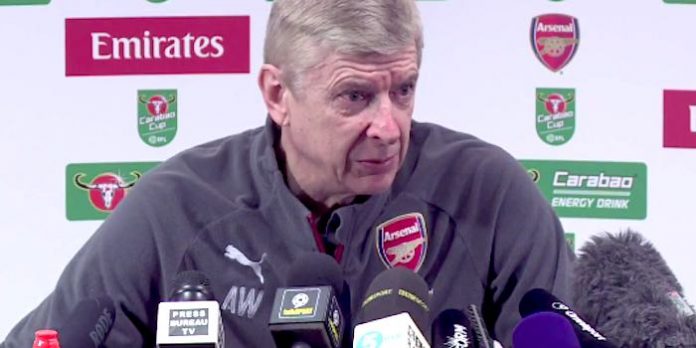 Arsene Wenger was back in front of the press this morning as he digested last night’s dismal 2-1 defeat to Östersunds FK in the Europa League, and began preparations for the Carabao Cup final on Sunday.

Arsenal face Man City at Wembley for the first of two games in four days against the league leaders, but with a trophy at stake there’s more to play for on Sunday than in the encounter at the Emirates next Thursday.

The manager provided the latest team news and injury update, and there’s a doubt over Alex Iwobi, but potentially good news over Aaron Ramsey’s availability for the final

Asked for his latest team news, Wenger said, “We don’t know what kind of state Alex Iwobi is in for example, we’ll know that today and tomorrow.

“Overall we have no injuries from last night. A few players were rested, they are all all right.

“I have to make a decision on Aaron Ramsey, he looks to be available but he has another test today, so we’ll know more about it tomorrow.

“Ozil had a good session yesterday, he absorbed it well, we have to see how he responds to it but I think he will be available for Sunday.”

ramsey to start on the right of midfield! AND THEN to link up with bellerina to dominate that right side all game!

you didn’t watch the game last night did you? you are far too upbeat sir!

After last nights absolute puss bag of a performance I’m finding it really difficult to raise my expectations for the final. To many times we’ve seen this team go horribly wrong.
As a fan i try to hope it all comes together and we pull off an amazing win….it’s a little bit possible init??

Duno what to expect from this group anymore so please surprise me …….in a huge sweet delicious way

All the fans should relax a little bit and overact with the defeat. More than half the team that played laat nite wont be in the team vs Man City for sure.
We will have Ozil, Auba, Ramsey, Monreal, Kos, Mustafi….it will be different team.
The team on Sunday will be a strong one.

And the spurs game?

With Iwobi likely out and Mikhy out of form, who are we gonna deploy alongside Auba and Ozil up front?

Mkhitaryan’s form doesn’t matter, he’s cup-tied and can’t play in the final. Wilshere would fit in nicely with Aubameyang and Ozil.

I wonder what ‘kind of state’ Iwobi is in? Roaming in Wyoming?

So much for Maitland Niles in midfield. I have nothing to say. A pair of Elneny and Maitland Niles in midfield. Mhkitaryan 2018 is not Mhki 2016. Hopefully with Aubameyang there will be some added bonus but without him (Read Europa), not quite the same is it? I think against City, we should have 3 at the back in Monreal, Mustafi and Koscielny. Kolasinac and Bellerin on either flank. Thereafter midfield engine room remains a real issue not solved. Granit and either of Jack or Ramsey IMO. The Swiss is flawed defensively but he gives us some value added going… Read more »

Of course…Mhkitryan is cup tied.

I guess it will be Ozil, Ramsey and Aubameyang for the Caribao.

Its a front group that tends to go narrow.

We lack creative wide players with pace at the moment.

So is the “good news” about Ramsey that he won’t play? or that he will??? I’m not sure I know what to hope for.