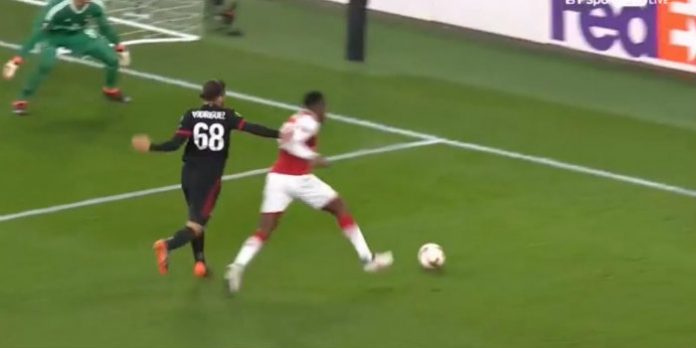 This was a very close game overall. Arsenal got more chances but took more from outside the 18 yard box leaving shots in the box at just 10-9. Arsenal also got 9 chances on target to Milan’s 3 but both teams created 3 big chances and had almost exactly the same number of “expected” goals by my formula. Only Milan’s wastefulness in front of goal prevented them scoring.

Both teams also scored goals from outside the 18 yard box which are low percentage shots – I don’t have a percentage for Xhaka’s shot, I don’t know how often a keeper saves a shot from distance and then throws it into his own net. Arsenal dribbled a lot more with Jack Wilshere completing 4/5 dribbles. And crucially, it was Milan who had the error for the goal (and the penalty error (ahem) instead of Arsenal; this time Arsenal kept things more tidy.

38 – There are a lot of column inches being dedicated to the penalty decision in the 38th minute most of which focus on the argument that AC Milan were “on top”. The data I see says that AC Milan scored an absolutely world class shot and other than that only completed 1 pass into the Arsenal box and set up just one big chance. Here’s what their pass chart looked like through the first 38 minutes. Obviously the source here is the StatsZone app which gets their data from Opta.

The yellow arrow is the assist for Calhonoglu’s shot, the light blue is Borini’s key pass for Silva’s Big Chance in the first minute of the match.

To be fair, Arsenal created even less than Milan in the first 40 minutes. Here’s Arsenal’s pass chart from the same period:

Arsenal’s chart looks like a typical Arsenal attack: patient recycling the ball around the edge of the box, probing, looking for an opening.

82 – Arsenal made 82 passes in the AC Milan final third in those first 38 minutes and Milan made just 30 in the Arsenal final third.

3 – Arsenal created just three key passes in those first 38 minutes but a whopping 11 in the final 51 minutes. That’s a rate of one key pass every 12.6 minutes before Welbeck’s goal and one every 4 minutes after the goal. Milan had a similar rate of one key pass every 12.6 minutes in the first 38 (3 key passes) and they created 9 chances in the final 51 minutes for a key pass every 5.6 minutes after the goal. Whatever you think of the penalty decision, it brought what was otherwise a pretty tame match to life as both teams went for the win.

5 – Tackles by Mkhitaryan to lead Arsenal… AGAIN. This time I can explain what happened: AC Milan lined up in a 442 and the majority of their attack went down the wings. You can actually see this in the passing chart above: that pattern continued throughout the entire 90 minutes with a rather prominent hole in the Milan attack from the middle of the pitch to the Arsenal 18 yard box. There wasn’t a chance for Arsenal’s CM’s to tackle. Though, when they did come inside Xhaka was dribbled once (52′), Chambers was dribbled once (58′), and Ramsey was dribbled once (24′). Only Mkhitaryan made his tackle (60′) in the CM position.

A final word on the Welbeck penalty: it was a dive and a bad call. Welbeck probably felt like he was going to get dragged back but Rodriguez didn’t apply full pressure. So when Welbs went down it looked real bad. These types of dives happen all the time and I’ve been complaining about them for years. But just a few weeks ago we all watched Alli dive and everyone in the English press hailed it as good gamesmanship and now tonight, the first article out of the gate is John Cross calling Welbeck an embarrassment to English football.

Good, so we are going to get two weeks of this now: the Mirror rekindling their anti-Arsenal -players-diving campaign. But I just want to say that there’s no way I’m jumping into the rabbit hole of speculative stats and tracking all the penalties we’ve been denied or harshly awarded. I don’t have time or the energy right now to devise even a preliminary look at the data necessary to make an intelligent article about that.

Ah, the good impartial British press. If Alli dives, it’s a clever play by a true professional to gain his team an advantage. If Welbeck dives, it’s diabolical cheating by a cheating cheat on a team of cheats. Nothing like unbiased, consistent reporting of news, is there?

“I felt a touch”, said another Spud and the opposition said ‘no one is talking about that dive’. True to word, the English media kept mum!

The strange thing is that Welbeck has stayed on his feet a number of times previously when he could have gone down. Ali/Kane are ALWAYS looking to go down.

The thing about John Cross is that he’s known to be an Arsenal fan. I’ve met him at Arsenal gatherings, talked to him, read his (excellent) book on Arsène Wenger. But he works for the Mirror. For some reason (we can speculate) this seems to pull him in weird directions. His reporting on this issue, like his reporting on the “Wenger out” campaign last year, is completely over the top. He often seems to fall over backwards to appear “fair” when reporting on issues relating to THFC, WHL, or ManU etc, but a strident, angry, tone takes over the moment… Read more »

Regarding the pen, even Gattuso said he wouldn’t condemn Welbeck as in his playing days he’d done stuff to get and advantage! I have only seen a couple of things about him (Gattuso) but I really like him. He comes across as refreshing honest, and a bit of a nutter. “Sometimes good, sometimes shit” Fantastic!

A Milan player was yellow carded for diving in the second half to win a dangerous free kick … Welbeck was merely being a ruthless professional.

Just watched a youtoobs of Xhaka at San Siro. No-one was marking him. He literally had all the time he wished to control, look up, and adjust a pass. Nearly every single time. So I guess we know how to use him now.

In fairness to AC Milan, their coach and players conducted themselves well. Saw good sportsmanship as well. Best wishes to them

Yes, except that guy who called the ref MOTM

Is it before or after calling the ref., MOTM?

If anyone should be embarrassed by the penalty call, it’s the guys who made it. It’s to the point now when commentators criticize a player (by praising him as “too honest”) when he doesn’t go down when touched. VAR makes more sense every time I see an incident like this. If players aren’t rewarded for going down too easily, and in fact are more regularly carded, they’ll stop doing it. Some of those goals the young Theo got by staying on his feet when he could easily have gone down are things of beauty that we see less and less… Read more »

Welbs has been falling since his last injury. He fell merely taking a short against the same team in the first leg. I have looked at the incident again. Was there a contact? Yes! Watch it again, Welbs did not intend to fall, the touch made him fall, minimal or not, that’s what the ref thought. Arsenal players, you all know are not coached to simulate like Drogba and Cane. Contrary to what I said, my position now is that it was a penalty. There was an intention to obstruct Welbs who on his feet could have taken a side… Read more »