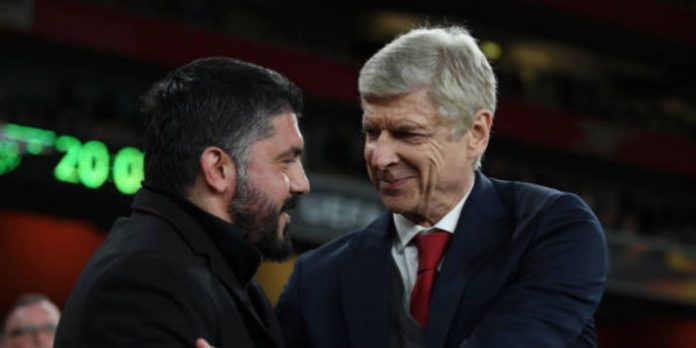 Arsene Wenger admits that Arsenal would prefer not to face Spanish side Atletico Madrid when Friday’s draw for the Europa League quarter-finals is made.

The Gunners progressed to the next stage of the competition courtesy of a 5-1 aggregate win over AC Milan with Danny Welbeck’s brace and Granit Xhaka’s strike enough to seal a second-leg 3-1 victory after the visitors threatened a comeback through Hakan Calhanoglu fine long-range effort.

Speaking after Thursday’s win, Arsenal’s third in a row, Wenger told the BBC: “We would certainly want to avoid Atletico Madrid.”

Clubs from eight different nations will go into the pot in Nyon, Switzerland with CSKA Moscow, Lazio, Marseille, RB Leipzig, RB Salzburg and Sporting Lisbon making up the lineup. Borussia

On his side’s performance on the night, Wenger added: “It’s much better. We needed that to recover from our results.

“It shows how the team has responded. We had a difficult game but in the end we won it.”

Arsenal steadied the ship courtesy of Welbeck’s penalty on 39 minutes, won when the England international took a tumble in the block. To say the decision to award a spot-kick is something of an understatement, although the boss refused to be drawn on suggestions his striker had taken a dive.

“Honestly, I don’t know,” Wenger said on BT Sport. “I’ll watch it again and give you an honest answer.

“I must say the positive of the situation, 1-0 down, you could see a response. Were we lucky on the penalty? I don’t know.

“I don’t want to accuse Danny Welbeck of diving before seeing it. He looked genuine that it was a penalty.”

Despite being on the wrong end of the decision, opposition manager Gennaro Gattuso was surprisingly magnanimous about Welbeck’s fall.

“Welbeck did his job and we don’t judge a nation by something one player does. I’m not there to judge him. We were playing in an important game and even when I was a player, I always tried to get away with something,” he told reporters afterwards.

“I don’t want to talk about the referee because we don’t want to look for excuses. It would be easy to cling on to that, saying it was bad luck.”

Bellerin: Everyone is sad for the boss

How many times have we seen it , if a player attempts to tug/push an opponent and hardly makes any contact and the tugged/pushed player reacts he’s making the referee make a decision be it right or wrong
If he doesn’t go down no decision to make we’ve had plenty soft penalties given against us also IMO these decisions don’t even themselves out over a season
There was no praise for Welbecks actions just astonishment , again not like against us where when he goes down it’s looked upon as being clever

Its a dive, who cares about other dives. Dele dives and his team are full of cheats. Is that what you want us to aspire to aswell.

WEnger was right when he said the English are now the masters of the dive. That was embarassing. Sorry I’m not going to go around calling out other teams and making excuses for it when we do. Danny cheated…not cool

Love him to bits, because I know any version of him would still kick any sp*rs ass

Yup. Was ecpecting him to turn out like klopp or conte, mad touchline antics. Does it mean that if one day Mad Jens becomes manager he’ll be a highly polished gentleman-type manager?

Yup. He and fergie were the masters of ‘i didnt see it’ since the 90s. Imagine the millions they could have made had they been ambassadors of Eyecare companies.

Wow what a great attitude and response from Gattuso. Hats off to him

Absolutely. The media should read his comments and stop trying to proclaim that the dive turned the game or decided the tie.

I am delighted we went through but that was a really big call at 2-1 in the tie. Although we were the better team over two ties that was a decisive and influential moment.

Um no… what I just said is very different to what John said.

The hate for arsenal in the media is unreal. I guess the narrative sells and they will exploit it best they can.

We don’t seem to teach diving techniques at Arsenal, unlike Sp*rs.

Welbeck must be remembering his Man U coaching.

Agree with the previous comment about Gattuso – would have been easy for him to blame a ‘bad decision’ for the penalty but to front up and say what he has is decent. We played well over 2 legs, a tough away trip regardless of them ‘not being the Milan of years ago’ and we deserved to go through. It’s nice to be left in Europe, and I for one am really enjoying this cup run (Ostersunds aside).

My respect for Gattuso increased a little bit. Lots to learn from his response.

Meanwhile John Cross can fuck off.

No clicks for John. I’m on an official boycott of all his writing.

He of all people knows exactly what he’s doing trying to enrage an easily aggravated fan base and that’s exceedingly poor.

No clicks for John.

Humbled by Gattuso’s response. Like Almond said, very different to Gattuso the player.

Gattuso didn’t bring up the penalty, and when the interviewer tried to bait him, he shut him up with a great answer and THEN proceed to apologise (again) to Nacho… I have to say, I am impressed.

Arsenal were told that things would even themselves up after hillarious dives by Hazard, Sterling and Richardson against us.

If people want this to stop, it is time to stop complaining about VAR and work on refining it for the good of the game. Until then, well done Danny.

VAR isn’t the complete answer in my opinion. I’ve seen it already used to unsatisfactory ends in a few different leagues. I will stick to advocating for harsh retroactive punishment as well, with extra punishment for cheating for a penalty. Same goes for violent tackles. Until there are true repurcussions to diving, it will not be solved.

No way was that a dive. He just did a “Welbz” and fell over his own feet! Don’t know what all the fuss is about. Ok it was not a pen but the fall was accidental and we got lucky for a change. We all love Danny but know he has the grace of a new born girraffe.

Diving is cunty and I’d like to see it eradicated from the game. That was a blatant dive last night. I also think that the argument that it evens itself out over a season is bullshit. Because we rarely dive, we’re punished more than rewarded. Getting a soft pen when already 3-0 up against Brighton doesn’t equate to having an unbeaten run ended by an ugly shrek looking fucker. So I feel sorry for Milan because that undoubtedly changed the game at a crucial time. But also fuck em because the Italians among others invented this gamesmanship, hence why they’re… Read more »

It was a dive and I’m embarrassed.
But I’m happy for the win.
I’m glad Gattuso understands.

Only one Dennis Bergkamp

We won. 5-1. We’re in the quarters. And that’s all that matters now. We can debate the ‘dive’ over a couple of pints when the season is over. Till then COYG. As for John Cross….