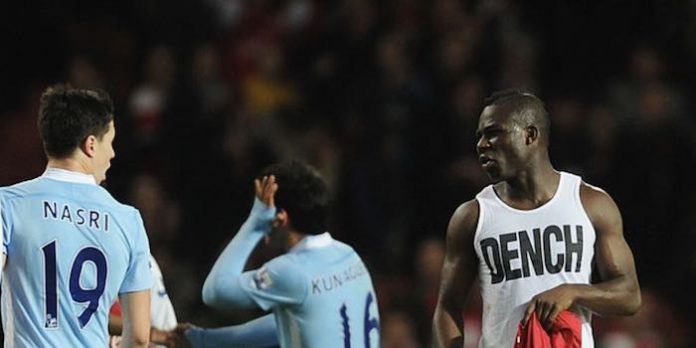 Former Gunner Emmanuel Frimpong says he never had any respect for Samir Nasri, labelling his ex-teammate an idiot in an interview with the Telegraph.

The Arsenal academy product revealed an incident after a 2-0 defeat to Liverpool which saw him get sent off – shortly before Nasri left Arsenal having spent all summer trying to engineer a move to one of the Manchester clubs.

It was home game early in the season, Frimpong picked up two yellow cards despite generally acquitting himself well, but criticism came from Nasri and not from Arsene Wenger.

“When the game ended, we were in the dressing room and I expected Wenger to be really angry,” he said.

“He was actually very calm, but for some reason Nasri came in and he was like: ‘We lost the game because of you’.

“I was a young guy, didn’t really know what I was doing, and was devastated. I felt like I’d let everybody down and he was really blaming me, so I really didn’t like him.

““He always had a go at me if I gave the ball away in training and even said to me once: ‘I could buy you if I want’. To be honest, he probably could have done at the time, but still.”

Some months later, the pair clashed during and after a Carling Cup game at the Emirates, which Frimpong remembered.

“People never really understand why that  happened but I don’t like the guy,” he said.

“The reason I don’t like him is because he’s an idiot. Plain and simple. I would never, ever have respect for him.”

Told there's been a fight in the tunnel. Nasri threw a punch at Frimpong then ran off into the away dressing room.

Frimpong also talks about Alex Song’s insatiable love of KFC, the current squad and more in the full interview which you can read here.

And when it comes to Nasri, we’re #teamfrimpong all the way.

Frimpong’s injury struggles show how difficult it is to succeed

Nasri was a very unlikeable fellow even when he was doing well. That comment about being able to buy Frimpong shocked me!

That can’t be said about his talent though. The idiot wasted it

But that very same Liverpool game, with Cesc on strike, everybody knew Nasri was off after the game but he played like a possessed man. Took on the Liverpool team almost on his own even after the red card.

He got one of the biggest standing ovation when he was subbed. Then he went to city and opened his mouth and ruined everything.

Was an idiot blogs? I didn’t realised he had passed, unlikely to have stopped being an idiot.

Instead of all of us saying “dilly dilly”, I say we should all say “Dench”!

Saying “dilly dilly” is a thing now? What have I missed?

Well, he’s famous for his clashes with Gallas both at Arsenal and in the French national team. Didn’t get along with Deschamps either, which lead to him being left out of the World cup squad 2014 and ultimately quitting the national team altogether (like he would have had a chance anyway with the team they’ve got now). An arrogant, narcissistic brat who had one really good season and thought he owned the world.

Say what you want about Frimpongs footballing ability, but at least he had the attitude.

I think the fact that he genuinly dislikes Gallas makes him at least a bit likeable. Apart from that he really was, and most probably still is, a gigantic cunt.

Always wanted Frimpong to be that option on the bench if we’re leading 4-0 to be sent on to impale someone and take the red card.

Not another April Fool’s?

Nasri was the perfect Arsenal player, we always won things when he was there and he was immensely loyal. Now hitting the heights in Turkey.

Frimpong was a terrible footballer, apart from a bit of tackling, he wasn’t good for much else, his passing was really terrible. Even while at arsenal, he was more interested in promoting his brand than improve as a footballer. Nasri holding him accountable is something Viera did all the time to the ones who make mistake. Every successful dressing room have these characters who will approach you if you let them down. Frimpong was use to the ‘no accountability’ approach from arsene, so it must have been hard for Frimpong to take criticism.. About nasri, he is what most men… Read more »

Vieira was the club captain so it was his job, and I’m sure his criticisms were a bit more nuanced than “you’re shit i could buy you”

It’s true, if you make mistakes then a bit of constructive criticism is no bad thing. But Nasri was just a cunt and should certainly never be compared with Paddy.

It doesn’t matter if nasri was the worst man in the world football is a team game and you don’t treat your teammates that way.

Telling a young player that he could buy him if he wants is class leadership isn’t it?
Vieira would be proud…

Never seen much to say Viera gave grief to young players in the dressing room. Generally always appears to have carried himself well off of the pitch. it was on the pitch where he was so brilliantly terrifying. Always mindful about the story of most the England team blanking Beckham balling his eyes out after the World Cup game against Argentina, including Hoddle’s captain, Alan Shearer. Could have broken the young player, but for every sane person’s captain Tony Adams giving him the consoling he so desperately needed at the time Frimpong in no Beckham, and this wasn’t exactly a… Read more »

Well there’s one with RvP. He takes a wild shot when a pass was the best option, looks up at a very disgusted stare from Henry, then from the corner of his eyes he could see Vieira coming his way.
He got away swiftly and tried to avoid him as much as he could till Paddy catches up with him.

All his said was ” don’t worry, next time it will go in”

That’s how sensible people deal with youngsters breaking through.

I really liked Nasri until he left. He was dynamic and able to do good things on the pitch. If you get a red card, expect to be blamed by someone and take it.

Men With Ven
Reply to  henry

Nasri was a petulant little turd and I remember plenty of stories at the time about him being toxic behind the scenes.

Nasri is a knob but before people start singing songs ornate frimpong I suggest you read the a telegraph article first to realise he was also never the sharpest tool in the box (his tweet that finally made Wenger sell him should remind you of that).

He also tweeted ‘How am I gonna draw girls now’ when he moved to Barnsley, and got sent off on his debut

So what ? That is criminal? Good humour go me.

Bloody Nasri and his poxy snood. The man could start a fight in an empty room

A little shitfucker along with that famed 1986-born bunch of French players. Greatest thing Deschamps ever did was get rid of those snotlickers when he took over the national team. And look what happened next.

I think that I’m correct in saying that Samir Nasri means Chinless MegaCunt in sandscript….

That he was my friend.

Nasri was a talented idiot, Frimpong was a talentless idiot. Off the two I’ve always preffered the former

Ah, dench. The kind of article we all tune in for.