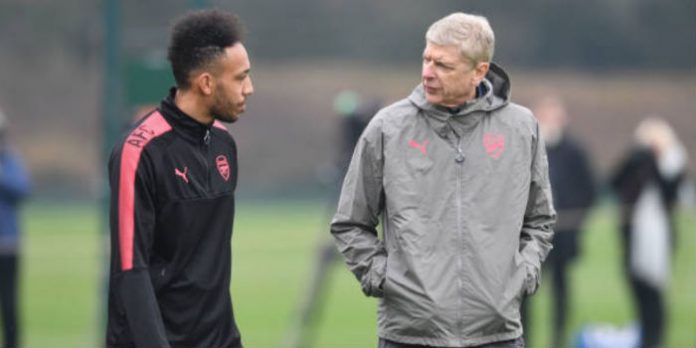 Arsene Wenger hopes Arsenal can replicate their impressive home form when they take to the road in the final weeks of the season.

The Gunners have endured a torrid time of things away from the Emirates this season, collecting only 13 points from a possible 45.

In total, we’ve won three games, drawn four and lost eight – form that has killed our chances of qualifying for the Champions League via a top four finish. Based on away form alone, we’d be 12th in the league, only six points better off than West Bromwich Albion.

Having had postponed games rescheduled, Arsenal still have four more away games in the Premier League. Tomorrow we travel to St James Park to face Newcastle and later have to tackle Manchester United, Leicester City and Huddersfield Town.

“There are certainly a few factors but there’s no real rationality in there,” said the boss when asked about his side’s away form.

“After we have lost one or two, the confidence drops a little bit.

“We were sometimes unlucky and sometimes maybe defensively we weren’t stable enough.

“It would be good for us to finish strong away from home now in the Premier League.”

As we turn our attention to a Europa League semi-final double-header with Atletico Madrid it seems likely that squad rotation will play a big part in the final weeks.

One man the boss will counting on is new striker Pierre-Emerick Aubameyang. Cup-tied in Europe the Gabon international will inevitably be selected to lead the line in the league. Having scored in four consecutive games, the boss is pleased to see hard work on the training ground paying dividends.

“He’s worked hard,” noted Wenger. “I feel he was not completely ready physically when he joined us but he worked very hard in training.

“He worked a lot technically as well, and has improved his touch. He’s quick now, sharp, intelligent and I think he enjoys being part of the group. You feel that when he plays and that’s why he’s very interesting.

“Also we need some fresh players over the weekend, so he always sure to play!”

Arteta: Aubameyang out of hospital after malaria diagnosis

Still so annoyed that aubameyang can’t play for us whereas james rodriguez can play against his parent club on loan in semi’s.

Our new Thierry? Lots of similarities, here’s hoping for a few good seasons and loads of goals.

Ok, let’s not hope for that.

Tip: don’t curse him by comparing to club legends.

He’s our new Aubameyang. Let him be his own man.

as manager it is your job to stop the rot, but the sheer fact is you do not defend, you do not press, and you still play a style of football which has been found out and is very boring, you alone are the fault and we will remain as a average team til you go, you can not motivate the team, you ruin players and halt their progress, your stooge Bould does nothing to help the team defend. We have players who simply are rubbish beyond belief. No leadership, no spine and no bottle. that is why we have… Read more »

By repeatedly referring to Wenger as you, I’m assuming you think Wenger can hear you

A P
Reply to  Boolaboola20

Probably a nobody on the Internet who tries to pretend he is somebody.

Spoken like a true loyal supporting fan of the team ????

If Auba continues this impressive run, he will reach the milestone in a record time….

unless we improve our first team significantly in the summer, we will finish sixth again, under wenger

I think having mhiki helped, but we haven’t had a signing seemingly intergrate with the team as smoothly off the pitch.

I’m looking at silver linings, but him being fresh due to no EL might get us 5th.
Yeah we would have a stronger chance in Europe with him, but we haven’t exactly struggled to score either.

Improved his touch?! Seriously. He’s been here a couple months and we’ve managed to improve his touch. Wenger does come out with some rubbish at times

Maybe Wenger meant that PEA was rusty when he arrived—remember he wasn’t regularly appearing for BVB—and now he has improved/recovered his touch. Or maybe he needed a period of adjustment in a new league, and during that time, his touch was not as good as it is now; i.e. he has improved his touch. Other explanation are possible, too.