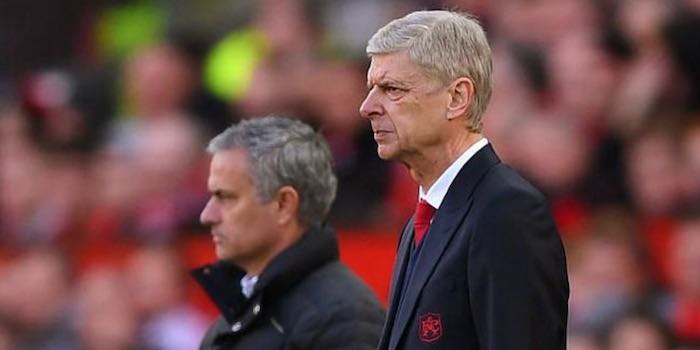 Arsene Wenger has had a little pop at sections of the press for the way they stoked the fires between himself and Jose Mourinho down the years.

We’re all aware of how it would go. It was a simple formula:

It was as tedious as it was unimaginative, and although the Arsenal manager admits his relationship with Mourinho has been difficult, he’s not less a section of the press pack off the hook either.

Speaking to Soccer Saturday on Sky Sports, he said, “It has been, like with Ferguson, very tense like always when you fight together, but overall it is respectful.

“I must say as well it is very difficult when you play against fellow managers, they get reported things that you have not necessarily said.

“In press conferences, they say ‘Wenger said that’ even if it is taken out of context and you then get people who are upset or vice versa.

“It is very difficult to keep it calm and quiet, but over the distance the respect always takes over. Do you know why?

“You always have respect for people who suffer, unless you are completely not human at all.

“You have to feel empathy for people who are in the same job as you.”

While Arsenal are expected to rest a number of key players ahead of the trip to Madrid on Thursday, it would be nice to see Wenger’s final game as Arsenal manager at Old Trafford – and against Mourinho – end with a with an unlikely win.

-and it would be true…

Its sad and a relief perhaps that the Wenger/Arsenal v Whoever/Man Utd “thing” is coming to a close. Christ, my family lived for the upcoming clashes and were duly rewarded until things got stale and we forgot how to defend.
I will miss Wenger so much, but even I can now accept that he is Passe but will never be forgotten. Unlike Mourinho, who is Passe and will be forgotten.

Arsene calls it correctly. Press has become a bellwether, shaping all kinds of opinions and sleaze mongering into “fact” to be swallowed by news eager fans ( myself included) disgraceful!

Mourinho has gone soft because he realised he isn’t the guy with the $$$ anymore. Pep is ahead of him with squad he has and the $$$ and Klopp is keeping him on his toes. Conte and Maureen hate each other. He is now trying the ‘I’m the mature/experienced guy in the PL now after Wenger’ act. He is trying to suck up to Wenger now because he knows if Arsene endorses him he’ll lose the ‘The dirty one’ tag. Maureen is so desperate to join the Sir Alex and Le Prof club. He has the credentials to join them(in… Read more »

@ramgooner. Your clarity of thinking is spot on. Well said.

He always speaks so eloquently and with respect and compassion for all.

Yes, the press can be right wankers, and can be downright disgusting with their double standards in how they treat certain managers and sides (note all the praise the british football press are always desperately trying to heap on Sp*ds all the time). But when you have a guy who straight-up calls you a “specialist in failure” out loud publically for everyone to hear, that’s not the press’ fault. Arsene shoudn’t shoot the messengers in situations like that. It’s why I honestly wish he wouldn’t acknowledge any of Mourinho’s BS this week about how he respected Arsene or whatever. The… Read more »

All true, but those messengers are fair game in my book. Right wankers. Fire away.

Personally I’ve not seen Mourinho as the villain he’s often portrayed as by many Arsenal fans. Egotistical? Arrogant? Sure.. But like Arsene said, overall there should be respect. I’ve had the impression that Mourinho craved Wengers respect and that’s why misconstrued, out of context ‘insults’ from Wenger prompted such harsh retaliation on his part. I wouldn’t want Mourinho for Arsenal manager if that were even possible as I don’t think his managerial style and personality suit the culture of the club but I certainly recognise his acompshlishments. Out of interest if you respect Mourinho then like this comment and if… Read more »

I hope we smash them late on and Arsene runs down the touchline and slides in front of Maureen with a double two-fingered salute. Maybe Vic Akers can oblige. Maureen is never less than a sewer rat. Wenger has more class in his left nut.

I honestly believe Mourinho is a special case. People like Pardew and Hughes can be giant pricks about football, but I don’t think any of them would have done what Mourinho did with the Chelsea doctor. And if they had, in the heat of the moment, they would have apologized, not fired her. Note that I use them as examples because it is absolutely inconceivable that Wenger would have been involved in anything approaching that incident. Mourinho, to quote Blogs, is “history’s greatest monster.”

The man also, in the testy aftermath of a Classico, poked a Barca coach in the fucking eye, then smirked and walked away.

THAT’S the kind of villain he is.

An IBS sufferer with dysentery will produce shit classier than Mourinho!

Frankly Moanrinho is a pantomime villain. He is akin to the trashtalker you get before a boxing match. What we can learn from Moarinho is the transition from attack to defense. he has always stressed on this point. Whether he has achieved it himself to the greatest efficiency in recent years is up for discussion. BUT we need to take advantage of Granit’s ability to release the ball quickly. The players who receive the ball need to make good decisions. We are missing the pace and invention out wide, someone who can trick his way past a player or two.… Read more »

Makes you wonder if Maureen ever watched any of Arsene’s press conferences after being told “he said this, he said that” and felt like a bit of a prick for being taken in by the press. I’m guessing no, coz he fell for it time after time