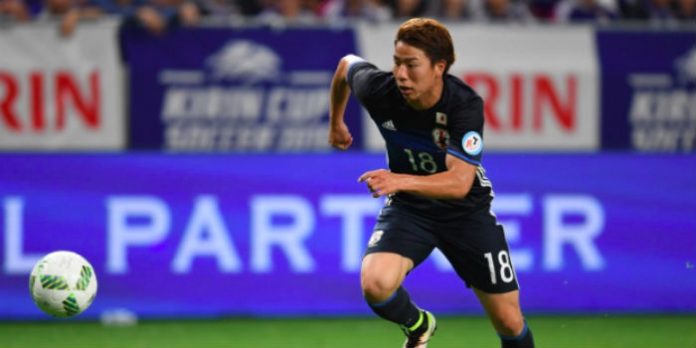 Takuma Asano will spend the summer preparing for life at Hannover 96 after he missed the cut for Japan’s 23-man World Cup squad.

The striker had been included in the provisional 27-man long-list but coach Akira Nishino ended up opting for experience when it came to listing his attacking options.

Asano signed for the Gunners from Sanfrecce Hiroshima in 2016 and has since spent two seasons on loan at Stuttgart.

The 23-year-old helped the Mercedes-Benz Arena outfit to promotion in his first year but made only 15 Bundesliga appearances during the last campaign. That lack of match action looks to have proved costly.

Last week Arsenal confirmed that Hannover 96 had signed Asano on a year-long loan deal so he’ll have another crack at breaking the German top flight come August.

Did you mention ‘a Sango’ cheekily there 🙂

Are some worries, for the rest of your summer.

No surprise. I haven’t been too impressed the few times I watched. He’s a hardworking player but I don’t see him making the grade here

Such a shame. Was really hoping to hear ‘Takuma Asano, what a wonderful name…’ sung on our terraces one day.

Sadly him playing for us looks about as likely as terraces being installed at the Emirates..

I know Real Madrid as a club are exact opposite of Arsenal in terms of finance, funding and buying ‘galacticos’. However since its different and since Arsenal will not be facing them in the coming season. I hope Wenger gets/takes the Manager’s job there.

It will be good to see Wenger operate without any financial shackles, may even mean I would dislike Real a bit less!

I would be greatly concerned about him taking the role, as it could seriously backfire. He spent so long talking about how he could’ve left us for Madrid, and to get it now could seriously damage his reputation. They’re aging and soon on the way down. Imagine if he doesn’t win the CL with the team that has won it 4 out of the last 5 years? Or worse yet, fails at the last 16? Too much damage to his reputation. I don’t that to taint his legacy. On the other hand, imagine if he beat Spurs with them in… Read more »

Voted you down for even seeing Spurs in CL final. I prefer Real beating them 6-0 in last game of group stage and they are eliminated.
After making history, two big Real players want to leave, the coach resigned : Ego, ego, ego. Not what Wenger needs.

Does anyone know if Asano’s not playing for Japan affects his work-permit issues for the U.K.? Doesn’t a player from outside the E.U. have to be included in a certain proportion of his national team’s selection (depending on how good the national team is) in order to qualify? I know that was why Joel Campbell originally could not play in England, and that playing for Costa Rico is how he became eligible.

Looks like we were writing comments at the same time! By my estimations, yes it probably will have an impact on his potential work permit

I wonder if this will affect the ability for him to get a work permit? Japan are ranked 60th at the moment (below Cape Verde Islands and Honduras) meaning he’d have to play 75% of Japan’s games to automatically get a permit (unlikely now). Failing that, I think he’d also be below the “Objective Criteria” points tally – which seems to give more points for having a high salary and transfer fee than to actually playing football(being in the top 50% or earners and having a fee in the top 50% (say £40k/w and £7m)= 4pts. Playing over 30% of… Read more »

If he had a mega season we could apply for a special talent visa- we’ve done it before.
Realistically though we won’t ever see him in an arsenal shirt

just get rid of him

Sell. Before anyone even contemplates selling Mustafi or Granit, we have players with even less potential – Sell : Jenkinson, Asano, Perez, Campbell + Elneny, Akpom. Keep : Welbeck for one more season. Potentially sell Chambers. Clear the decks first and this should generate some income. Estimate say 10m each (average) that should take in 60m. Forget Lichsteiner. Move AMN to his natural side at fullback. AMN is not the quality or experience we need in midfield. He will have less opportunities if we bring in a new player (which we need) particularly if Jack stays. Elneny is a decent… Read more »

Why sell Elneny? He’s one of the hardest workers in the team, and he showed some seriously good football at the end of last season. Emery is going to need workers like Mo in this squad as there is going to be a lot of dirty work to be done as we try and claw ourselves back up. AMN is not a fullback, he is a midfielder. Young centrebacks + good defensive coaching + good team shape = a great Arsenal defence for years to come. Arsenal do not have a lot of money to spend on transfers this summer,… Read more »

We have very few players these days that will set the world alight. PEA aside, I don’t think we have any other players in the squad which you will say we will miss seeing in the world cup from a neutral perspective. Even those in contention, maybe Granit or Iwobi may have some attention but that’s about it. Ozil is old news now and Elneny is average. Monreal is a back up. We need to buy players that can strike the imagination again but the way it seems to be going, we are like any other mid table team in… Read more »

My goodness, why do people live in such a dream world when they talk about transfers? First, we don’t have a big budget this summer, unless we sell Ramsey, so we won’t be signing anyone exciting. Second, we have a new coach and staff who haven’t even met the players we do have right now, and it would be foolish for Arsenal to spend a lot of money on players to please the fans when we haven’t even seen how this team works under new direction. Everyone must please try to be patient and sensible as the club moves through… Read more »

What a shocker!! No sleep for me tonite. Poor chap.

I wish him well in Germany but it’s clear he won’t ever play for Arsenal. I hope he carves out a decent career in Germany like a lot of Asian players do.