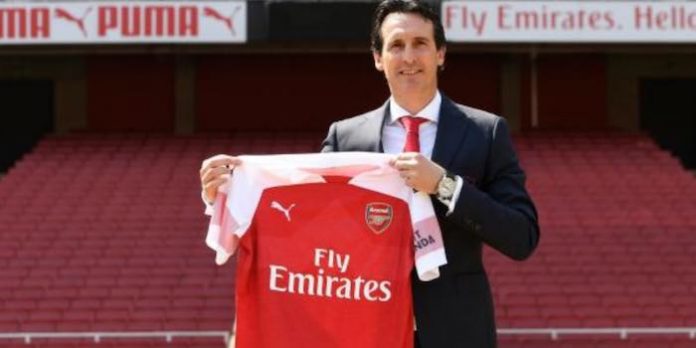 Arsenal’s new head coach, Unai Emery, says he wants to instill a sense of confidence in his players when his work and the new season begins.

The Spaniard spoke to the media yesterday, insisting he’ll respect the traditions of the club, but also clear that he doesn’t want his team to be afraid of any opposition sides they’ll face along the way.

The 46 year old gave an impressive performance at his introductory press conference yesterday, and outlined his desire to make the Gunners more competitive.

Asked if he thought closing the gap on Man City was a key part of his remit, he replied, “That is our objective. Arsenal is a club with fantastic personality and identity and I believe, and the club has shown me that they believe.

“It is about showing that personality and showing the stature of this football club. What we want to do is not fear any team neither here in the Premier League or in Europe and our objective is to be among the best and to beat the best.”

Arsenal have good players who haven’t quite performed as consistently as required, and Emery’s job will be to get more out of them. How?

“I think it is about having belief in the players,” he said. “We will have time to speak about where we need to improve, we have already touched on that a little bit, we do need to go into more detail but we have got that strong nucleus if you like.

“I’m the type of coach who has always worked really hard, not because I do it better than anyone else but because that is what I believe the most important thing is.

“I’m very demanding of myself, I’m passionate and I really want to transmit that to the people around me – that we can, and must, improve in the future.

“That is the kind of thing I want to transmit, that desire to be better and I think that will lead us to improve in the Premier League and in Europe.”

Can’t wait to see him screaming from the touchline.
Blogs, the like functions are showing now but I’m still not allowed to vote! I know you’re working hard at it…

Blogs need to work harder and do a video analysis!

A Different George
Reply to  Barry

I sent Blogs a 50 megabyte flash drive with technical advice; he claimed he read it, but it was blank.

Intelligent, not that well known in the UK, hard-working, has ideas.

Arsene’s recently weaknesses were his defence (including not having a strong athletic DM) and not having a David Dein figure to help out behind the scenes.

With Unai wanting to have strong organised defence and Sven and Raul to back him up we may well have a far better chance than before.

So far it sounds promising.

One thing i got to know was we know is os good technically but he is also a good motivator like conte and klopp. when he started managing sevilla they had not won a single trophy for five years . he not only made them technically good but also instilled a sense of never give up attitude that lasted for years. we saw that in the europa league final against liverpool. they came back from 1 goal down to win it. arsenal desperatively needs some of that steel

Now go out and buy him Ben Arfa, Ivan.
Just to spice up things.

well when you are rock bottom, the only place you can go is up

Rock bottom of the top 6?

Rock bottom of where we were in more than teo last decades.

More than pleased with this appointment. He has the pedigree, fits our situation perfectly and that first interview was very gracious indeed.

What’s going on? Fatgooner was happy too. I wasn’t aware this was possible.

My world has turned upside down.

I Didn't See It
Reply to  Pedant

It’s an impostor. The real Fats lies bound hand and foot in a deserted warehouse somewhere, yelling “Emery Out!”.

Freetime thumbs up from me, considering I confess I had no idea who he was…..!

‘Improvement in Europe and premier league’ will make us all very happy, at least he’s under no illusions of the work that needs to be done to turn this team in to winners. Actually really looking forward to the new season sort of exciting but a little bit nervous.

Proven track record and sounds like he’ll challenge the players in a way that Wenger either no longer could or wasn’t part of his methods.

Gosh, that shirt is aweful. Visit Rwanda logo almost makes it look worse!
Best of luck to the new boss. I am also excited for the new season. Fingers crossed for a couple of tasty new signings to put icing on the cake.

Just booked a ticket to East Africa, a recovering country advertising with us, I Like that very much.

I felt the desire! It worked on me Emery !!

Where are all the Wengerittes?I cannot see a.ny of them posting any comments today!!!At last now they know it is all done and dusted!
I am excited and can’t wait for the new season! Unai Emery will do much better. Look at his body language during the press conference. Ozil and the others have no place to hide.

A P
Reply to  George Onyango

We’ve discovered what the problem is with the comment rating system. Hopefully we can get it sorted soon. Sorry for the hassle.

Thanks Blogs! Hardworking as ever 😀

We are better without. More thoughtful comments or just going for high positive or negative impact. Leave it off, we have a far better comments section if so.

Your opinion, don’t say we…

The thumbs up and down encourage people to say v positive or v negative things to get thumbs. So the comments section loses intelligence. And there are loads of comments replying to the first comment so that people get attention, knocking other better comments down the list.

Justify why the thumbs up/down are good.

Tusen takk Blogs. without the Thumbs Up you’ll have to settle for an ‘Aye’.

Maybe you could look into all the Spuds themed advertising i keep seeing, like something to do with Alan Sugar yesterday. This is Red route. So don’t stop and fuck off advertising trolls!

He did a conference call with all the staff at Highbury House, the stadium, the hub etc. A meet the new guy kind of thing, it was strange because I kept thinking, “when is Arsene going to say something”? And also “this is the guy who is going to control my mood for the next X amount of years” That being said he came across really well and a few English mistakes aside (still better than me) all the staff are looking forward to the next chapter.

Unai Emery he’s our man,
Emery’s a Gunner now and he’s our man
We’ve won trophies with the Pro-fess-or
Emery’s going to win us many moo-oore

We’re all Gooners for our Emery
We wouldn’t have a Brendan or Fat Sam
He’s loading up the cannons at the Emeryates
Emery he’s our man!

-Henery the 8th.
Optimistic, Campy, yeah, I know.. It just wormed in and wouldn’t go away.