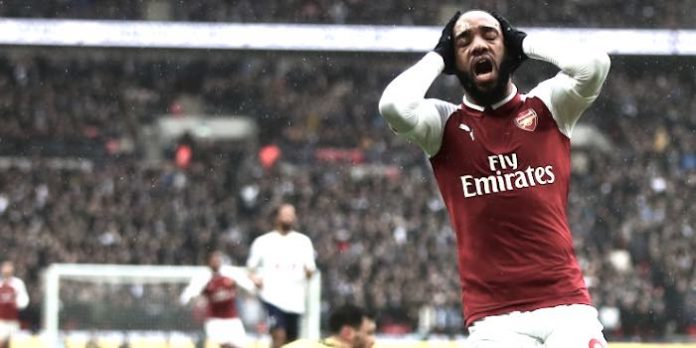 Alex Lacazette finished his debut season at Arsenal as the club’s top scorer with 17 goals, not a bad return given he was sidelined by knee surgery for the best part of February and March.

Despite bouncing back from injury to end the campaign with eight goals in 10 games, Didier Deschamps opted not to pick the Gunner for France’s World Cup squad. He remains on the reserve list should someone pick up an injury, but the decision represents a crushing blow all the same.

Speaking last week, ahead of the announcement of the squad, Lacazette was confident about his chances, especially having overcome his mid-season blip in form.

Asked by L’Equipe [translated by Get French Football News] whether he was ‘guaranteed a spot’, ‘most likely going’ or was a ‘possible’, the 26-year-old replied, “Most likely going maybe? I think my two goals in [November’s 2-2 draw with] Germany definitely helped!”

Lacazette went on to reveal that prior to that match, Deschamps had labelled the friendly a ‘make or break’ moment for his chances at international level.

“Basically, he told me that my future depended on that match. He essentially told me, “You have a lot to prove tonight, I’m giving you the opportunity to start a big match. Seize the opportunity and show me!”

He went on to reflect: “It was a relief [scoring]. A forward is judged based off his goal return or the opportunities created. I went without scoring since the game against Denmark in 2015.

“I really needed those two goals, they really helped me. Was it enough to be in the 23 man squad? I don’t know, but it would make me really happy. Very, very happy!”

Without a World Cup to look forward to, Lacazette now faces the prospect of a few weeks holiday before he returns to Arsenal to work with a new manager. If there is a positive from Deschamps’ decision, it’s that the striker, like Pierre-Emerick Aubameyang, will be properly rested ahead of pre-season.

Hopefully, having endured a lot in his first year in England he’ll also be mentally and physically tougher. As he admits, his return from injury in March marked a turning point.

“Before the operation, I felt pain, but I told myself that I could continue. I was going through a rough period, where I wasn’t playing well or scoring, but I didn’t want to find any excuses. Eventually, my knee started to lock up, so I couldn’t hope to finish the season and go to the World Cup with my knee in that condition.

“Seeing as my pain went away [after the operation], I felt liberated. That time off helped me to analyse everything that happened to me during the last months.”

Lacazette’s return to the pitch saw him immediately end a scoring drought, the likes of which he’d never endured in his time as a professional.

“I had never experienced that. At night, when I would go home, I would repeat to myself, “Come on, next time it’ll go in!” But it wasn’t…and I’d only realised this after five or six matches. Suddenly, I started asking myself, “How long has it been since I last scored a goal?” It started to bother me.

He added: “Apart from scoring, nothing can help. Your everyday life of course, but on the day of the match, that’s all that matters. After my operation, I started to score right away and it all came back. You get more involved in play and your confidence goes through the roof.”

It’s not often you hear a striker talk so openly about the trauma of not scoring. Here’s hoping Laca can pick up where he left off when things get going again in August.

It’s well worth reading the rest of Lacazette’s interview, there are some interesting snippets about his body language and his respect for Arsene Wenger.

Next season will be very exciting if we can get a couple of defensive additions – Lacazette, Auba, Ramsey, Bellerin and Mkhi will all be fully tested over summer and will be raring to go in the Prem. They’ll also be getting rest breaks in the Europa League too which gives me a lot of confidence that the bulk of the team should be in great shape all season. Add a couple of defensive enforcements and I think we will be in for a very exciting season

Given how Auba and Laca were really starting to gel together I’m hoping having the summer off and a full preseason together means that hit the ground running at the start of the new league. Wouldn’t be surprised to see both of them hit 20+ next year

i feel for him , missing out on France . But it’s good for the Arsenal to have him well rested and fully fit for next year.

Surely strikers are not judged on goals Laca. Don’t be silly.

Laca is a top top player. He has got great technique and doesn’t disappear in big games. He lacks mental fortitude though which probably comes back from his laid back nature. Spending so much time in the French league must have caused that. He should come good next season.

I think Lacazette could be a surprise departure this summer.
I’m not sure how you solve an Aubameyang, Ozil, Lacazette puzzle?
Moving Lacazette on? and signing Martial? would make a lot of sense.
Martial is homegrown, more versatile than Lacazette, surplus to requirements at United? and apparently available for £60mill?
Otherwise it means either playing Ozil wide? Lacazette as a 10? Or Aubameyang wide?
Having United become our feeder club also appeals

Unfortunately the Arsenal boardroom have monopolised all the banter, and there’s none left for anyone else.

The Question
Reply to  Banter FC

dont think martial is home grown. he went to utd at 19.

Why would we sell one of the best strikers in Europe. Despite his injury problem still scored 17 goals and looks like he will form a deadly partnership with Aubameyang. I like Martial but he is no more lethal than Lacazette.

It’s very upsetting not being able to thumb things up

Really feel for him. Thought he deserved to go. He’s like a greizman Giroud hybrid.

We all hate not scoring. Though it happens to most of us more than we’d like to admit.

great, so if he don’t score for a couple of games he is gonna go to pieces, just what you want to hear from your main striker, its unbelievable, only at arsenal

You do realize players are humans right, and not just robots controlled by joysticks.

To be able to talk about your insecurities and fears in this case takes real strength.

Why am I prevented from voting?

Coz this ain’t a democracy son.
Welcome to the new regime under blogs.

This is better no? just express your opinion.solves the troll infestation.

Deschamps sounds like an absolute prick, doesn’t he? “Score or you’re dropped”, player scores and has a good end of the season – still dropped.

I have seen him and Auba play pretty well this season without being fully up to speed with the physicality.. a good pre season and i have no doubt they will be flying next season.