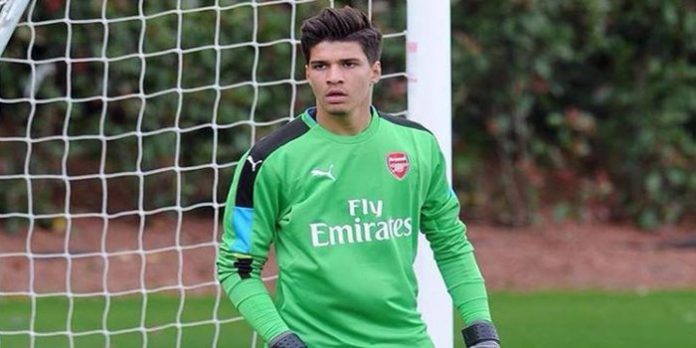 Arsenal’s 7-1 aggregate defeat to Chelsea in the FA Youth Cup final last month was a chastening experience for the club’s youngsters but one member of Kwame Ampadu’s side still managed to enhance his reputation despite the hugely disappointing overall outcome.

Goalkeeper Joao Virginia made some outstanding saves and it isn’t an exaggeration to say that Chelsea’s margin of victory could have reached double figures were it not for the actions of Arsenal’s shot-stopper.

Virginia has now completed his third season at the club since joining from Benfica as a schoolboy and the Portugal youth international has developed extremely well during that period, becoming increasingly confident.

This season Virginia mainly played for Arsenal’s U18 side and he is still eligible to feature at that level next campaign in the league as an overage player.

However, it is anticipated that Virginia will instead be more frequently involved with the U23s as he looks to continue his development and edge closer to the first-team squad.

Virginia himself has stated that he wants to get into the first-team very quickly, but, despite his vast potential, his hopes in that regard are not helped by the fact that Arsenal have a host of other young goalkeepers on their books.

Matt Macey, Deyan Iliev and Ryan Huddart are all older than Virginia, and, while Huddart could well be released this summer, it seems that the other two will be staying for some time.

Macey has been on the bench for the first-team on many occasions and made his senior debut this campaign, while Iliev has shown some significant signs of improvement after recovering from a knee injury that kept him out for two years.

Goalkeepers often have to wait much longer than outfield prospects in order to make the breakthrough into the first-team and, aged just 18, Virginia is still very young for a player in his position.

Whether he will be patient enough to wait for his opportunity at Arsenal remains to be seen, but Virginia is certainly a very exciting prospect who can thrive even in difficult circumstances.

The U23s, perhaps under new management, will be aiming to retain the Premier League 2 title next season and playing frequently at that level would be of great benefit to Virginia as he would face some very talented prospects from across the country and perhaps even some more senior stars.

At this early stage of his development Virginia certainly seems to possess the potential to at least have a chance of succeeding at Arsenal, but he may have to wait some time before he is afforded the opportunity that he craves.

What a great name.Though he would be great at atletico madrid.We are prone to letting in.

you are never to young to be a goalkeeper, I watched him in the final against Chelsea, and I thought he was brilliant, better than the rest of our goalkeepers

Other than Szczesny, has a single goalkeeper even nearly made it through our youth academy? Why is it that we produce players in every position bar between the sticks?

I think this one will, he is quality

Vito Mannone too. Stuart Taylor was also sort of a Premiership keeper. Sort of.

he has a premier league winners medal

Just looked and he’s still in the Premiership! He’s at Southampton. Never played for them, of course.

Have got to stick about at the Arsenal bud, The North Bank crowd will be desperate to build on that song to sing for you….

Will Even get Gooner Mark Strong to do it in an awesome Scottish accent if thats what it takes.

Once emailed a Partner called Virginia at a law firm I worked at. Unfortunately I misspelled her name and typed Virgina and then spent the rest of the day laughing to myself.

Do you think Emi Martinez would make the grade or be sold? His Getafe loan could not have gone worse.. Macey over Martinez?