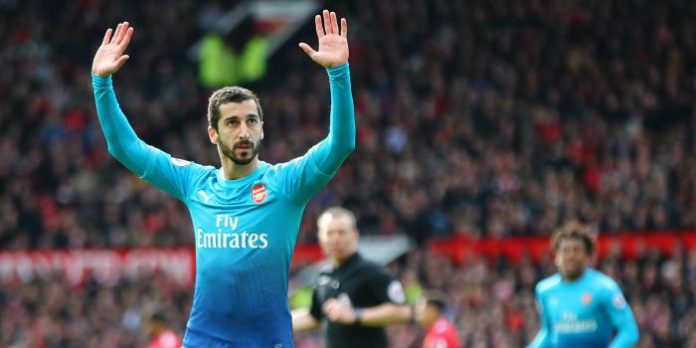 Arsenal travel to Spain later today to prepare for their Europa League semi-final second leg against Atletico Madrid, apparently boosted by the availability of Henrikh Mkhitaryan.

The Armenian international made his comeback from a knee ligament injury on Sunday, playing 75 minutes of the 2-1 defeat to his former club Manchester United.

However, after the game Arsene Wenger cast some doubt on his participation this week when he revealed the 29 year old had picked up a knock on the same knee that had sidelined him in early March.

The good news is that he is back in full training which should mean he’s available tomorrow night.

Mkhitaryan back in training.

It remains to be seen if he’ll play from the start, and if he does who might drop out. Jack Wilshere seems the most obvious candidate from the team which started the first leg, but it all depends how Wenger wants to approach the game.

If he’s inclined to try and keep it defensively solid for a while, he might keep Mkhitaryan on the bench for later on when we might need to change the dynamic of the game and find a goal.

Swap Elneny for Welbz – Elneny is out injured

plus two unexpected goals from sub. Welbz…and the result 2:2, that we all welcome with open arms 🙂

Elneny is still out, that picture he posted the other day was just on a bike

i think welbeck will be dropped instead of wilshere.

Mkhitaryan should start. It’s a no-brainer.

And there should be no “let’s take it easy early on”: we should go at them right from the start. Let’s be honest: we’ll probably need to score at least two goals to get through, we’re not good enough defensively to keep a clean sheet against Athletico. But, as we showed last week, we can make plenty of chances against them. If we can finish better then we can do this.

I’ve got a good feeling about this. It would be fitting if Wenger’s last Arsenal game was in France against a French team.

that was…almost positive. are you feeling alright?

Excuse me for being hyper but this is the most pumped I’ve been as a bleddy football fan since our very own UCL final run more than a decade back. Oh and that was also (coincidence or…?) also my first full season as a Gooner!

You blow my mind, Mkhit…

(for any Blondie fans)

Toni Basil may well be a Blondie fan…

Better memory than me.

Glad to read he is in training. I think we need him from the start. He seems to be one of the few players that has the urge (and the ability) to shoot from distance. Considering we need to score some goals, the team could really use his treat to make our play less predictable.

It’s either Mkhi, Wilshere or Iwobi. I say start him. The other 10 players are set (except for cech/ospina maybe).

Things have gone so wrong this year for Arsenal to the extent that I have a good feeling about this game. Definitely the most buzzing feeling I’ve had before a game this season.

Ha I had that feeling last week also.. I’m feeling a lot more nervous this week!

He should start, with elneny injured Jack and Amn should be on bench for central cover, with iwobi the wide sub.

He’ll be useful to stretch their defence for sure, but I wonder if they’ll target his knee with a few knocks and take him out of the game

………………………..Laca…………………………….. Welbeck………..Ozil……….Ramsey……………Mhki ……………………….Granit…………………………… Monreal……..Koscielny…..Mustafi………….Bellerin ……………………….Ospina………………………….. I think Welbeck genuinely gives them problems…IF he makes powerful diagonal runs. Mhki and Ramsey have to be mindful if Greizzman should deploy on our right and when Bellerin surges forward. Koscielny/Mustafi for me. Still a lot of people with foggy heads prefer to drop Mustafi when Koscielny was the one who made the mistake. Inexplicable. Don’t be fooled by Mavropanos over a second gear United side. The experience at the back will be key but BOTH Cbacks have to be on top of their game. If in doubt, clear. Ospina and Cech has advantage… Read more »

Not sure if Costa is available for them. We will have to be very careful if he is. I actually feel we may be better served with a 3 at the back if we should nick a goal early. An extra Cback (yes, Mavropanos or Chambers) to help keep an eye on Costa and/or Greizzman. It will allow our fullbacks better opportunity to push forward and help catch them on the break. BUT I think Wenger may opt for something similar to first leg to swamp them in midfield first. It’ll be an intriguing battle to say the least. We… Read more »