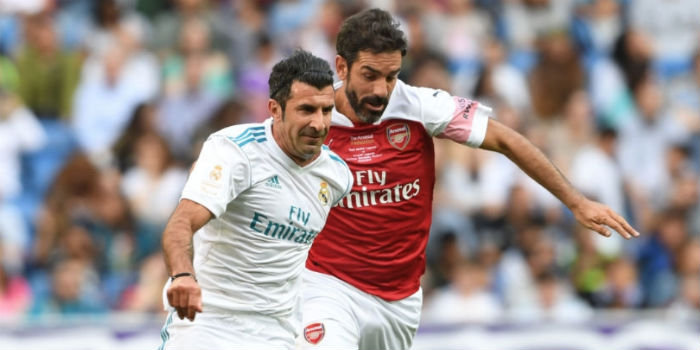 Arsenal Legends have been beaten 2-1 by their Real Madrid counterparts in front of a packed crowd at the Santiago Bernabeu.

Luis Figo, Roberto Carlos, Clarence Seedorf and Xabi Alonso all started for the hosts who had the better of the opening stages and broke the deadlock when Raul’s fine header looped over David Seaman.

The Gunners, despite having a smaller squad that also suffered the loss of Sol Campbell to injury after 5 minutes, battled hard and found an equaliser when Robert Pires played in Luis Boa Morte to calmly finish. The Portuguese was a livewire throughout, contesting refereeing decisions like his life depended on the result.

The scores didn’t stay level for long. On 19 minutes, Guti, who has been tipped as a possible candidate to replace Zidane as Real’s head coach, notched what turned out to be the winner after working space for a shot with a nutmeg on Matthew Upson.

Emmanuel Eboue came off the bench to put in a man of the match performance for David O’Leary’s side. The Ivorian, 20 years younger than some of the others on the pitch, embarked on a couple of fine solo runs and seemed to really enjoy himself.

In case you missed it earlier, what a run from Emmanuel Eboue! ?#YouveOnlyComeToSeeEboue ?#AFCLegends #CCM2018 pic.twitter.com/2DfTRPVEpO

Arsenal had chances to grab an equaliser in the second half but Nicolas Anelka left his shooting boots at home and Pires had a free-kick cleared off the line.

So close to a @piresrobert7 equaliser!

The match was played to raise money for Real’s charitable foundation and the two sides will meet again in three months time to help the Arsenal Foundation do the same.

You can buy tickets for that game, here.

I can’t be the only one who looked at Solari’s hair and thought, ” that’s not bad.”

some fun highlights. I love how Guti hugged Upson after his goal!

No mention of Eboue in the line up yet he came on and gave a man of the match performance?
News hound out!

I love how Emmanuel Eboue looks so fresh! #Legend

Highlights for me were:

Eboue’s solo run, which was ended with a rather cynical looking foul to me 😉

Winterburn getting the better on Figo.

And for the opposition:

Seeing the original Ronaldo chuckle on the bench after Real hit a free kick straight at the wall.

Typical of Eboue to dive like that. I liked him but his propensity to cheat really pissed me off. I remember him running down the left wing one day and with noone near him he fell to the floor as if he had been shot, even our fans booed him but he never stopped diving.

Boa Morte must be a super man starting and also staying on bench….. He scored….while Eboue didn’t make the team yet put in a man of the match performance……

Blog wake up…. The season is getting closer

Very very happy that Éboué got out of depression and despair. Tough when a woman leaves you and strip you of everything.

Bobby’s still got it !

How good did Bobby look. Some of his through balls were very good. Will God, Kanu and Henry be about for return leg?

This is all fun and I like it. But seeing seaman without the mustache, it just feels wrong

Maybe he's born with it, maybe it's Bellerin
Reply to  Michael Bolton Wanderers

Anthony
Reply to  Maybe he's born with it, maybe it's Bellerin

All replaced by middle age and a beer pack 😉

Maybe (just maybe) we will see Zidane and Bergkamp on the same pitch for the next one.

It’s a weak maybe though

PeteyB
Reply to  Maybe he's born with it, maybe it's Bellerin

And Seedorf again. Loved him as a player.

Great to see so many legends still at it. Maybe one day they can find a place on both benches for a fan even if only for 5 minutes. Could raise some more cash by selling some fans raffle tickets winners get a run out and a day never forgotten. Great fun.

I tweeted this as well but I just have to say how much I love our club.
6 months after its revealed that Eboue’s life is in tatters and he is getting so much love from the Arsenal faithful.

This is scraping the barrel, isn’t it? Who gives a fuck about a bunch of has-beens having a kickabout? I hought we were looking towards the future?

What about the REAL football stories?

People seemed to enjoy this. If you didn’t, that’s fine, but you can just not like something without having to piss all over it.

What’s the latest with the Ramsey and Wilshere contracts? What’s happening to Steve Bould? And Lehman? Are we in for a top-quality keeper? And a DM? How much money do we really have to spend? When will Kos be back? Will Ozil be sold if he has a decent World Cup? Will Josh take over as the owner of the club?

THESE are the questions I’m interested in! It’s called Arseblog NEWS, isn’t it?

(1) …which you don’t have to read if it’s not to your liking (2) …Arsenal Legends v Real Madrid Legends 9the clue is in the teams). How is that not Arsenal related News?
(3) Blogs is not on the Arsenal Board (yet) and so is not privy to such information

You may as well start your own blog and some us might start logging in to your wonderful site with all the glorious news about everything Arsenal.

Sign me up for a fatgooner.com blog! where you can get all the latest Wenger spewing vitriol, Arsene anti-success doctrine, and all the happy rainbow unicorn comments in the world.

You are not just a nice person fats.

Maybe he's born with it, maybe it's Bellerin
Reply to  Fatgooner

Moaning about a game raising funds for charity. Someone’s getting their troll on!

Look Fats…I know it’s tough trying to collect down thumbs all the time.
You know you can just…fuck off. Right?

I’m pretty sure the charities the game was in aid of and the people they help care, as do the majority of the 60,000 fans who turned up for the last legends game.

At the moment you have 34 downvotes and 0 thumbs up – looks like no one “gives a fuck about” you opinion on this match, yet you still feel compelled to write a comment about it…

Where you from? North Korea? In England we’re allowed to express an opinion – even if some people don’t like it.

BTW: none of that was true about David Hillier.

In effect I’m saying your comment is as valid as the article, just no one cares about your opinion whereas people do clearly want to know about the Arsenal Legends match.

My Friend, you seem to really have an issue with being happy even for a moment. Being morbid all the time is really awful and it doesn’t suit you if you asked my opinion.
Blessings

I live in Madrid, so decided to go to this and it was a nice evening out. Great to see quite a few fellow Gooners make the trip too. Looking at the prices for the Emirates match however, why are they so expensive in comparison? The most expensive tickets at the Bernabeu were €18.

seeing Pires gliding about in an arsenal shirt is equal parts amazing and torture.

great to see him out there, but how much we miss that man.

Seems a bit unfair to have Xabi Alonso out there. Everyone else has been retired for a decade at least.

Legends game? i want to see Arsene on the pitch!