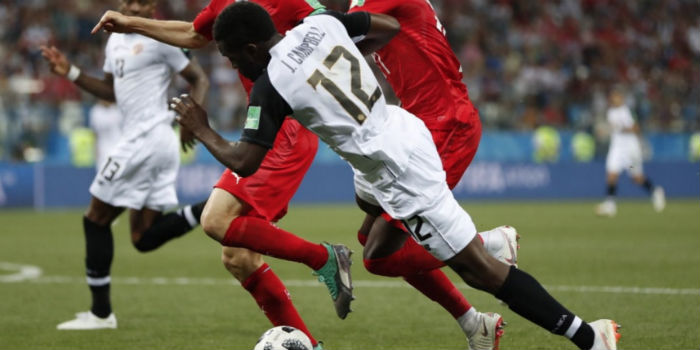 The World Cup dream is over for four of Arsenal’s stars after Egypt, Costa Rica, Nigeria and, most shockingly, Germany all went out at the group stages.

Five lads are still flying the flag for the Gunners…but for how much longer?

Egypt’s disappointing World Cup ended with another stoppage time defeat as Saudi Arabia bounced back from Mo Salah’s strike to claim the points. Elneny completed 38/39 passes but his tidiness in possession wasn’t enough to stop the Pharoahs finishing bottom of Group A.

Lionel Messi’s brilliance and a late strike by Marcus Rojo put a smile on Diego Maradona’s face (or was it something else?) as Argentina sent Nigeria packing with a 2-1 win. Iwobi started on the bench for the second game running and only came on for a few minutes at the end. In total, he played 62 minutes in Russia; a disappointing experience given his showing in qualification.

An already eliminated Costa Rica twice came from behind against Switzerland to secure a 2-2 draw. Joel Campbell won a stoppage-time penalty that ultimately led to his country’s equaliser…we say ultimately because the effort by Bryan Ruiz initially crashed off the bar, hit keeper Yann Somer on the head and slipped into the net as an own goal. Costa Rica still ended up finishing bottom of Group E.

*selects sarcasm font* Mesut Ozil single-handedly engineered his country’s first group stage exit from a World Cup since 1938 by creating seven chances for his teammates in their 2-0 defeat to South Korea. The reigning World Champions needed a win to go through but in their desperation to find a goal, they got loose at the back and conceded twice in stoppage time. In your face Manuel Neuer.

Having escaped FIFA bans for their celebrations against Serbia, the Arsenal duo both started as Switzerland went in search of a win that might have helped them finish above Brazil. As outlined above, they were denied three points at the death by a comical penalty. Xhaka completed 97/101 passes in midfield – a whopping 96% completion rate – while Lichtsteiner did his angry face 5 times. The Swiss face Sweden on Tuesday night.

Danny’s World Cup stepped up a notch as he finally got game time, coming off the bench for 11 minutes as Gareth Southgate’s much-rotated Three Lions lost 1-0 to Roberto Martinez’s much-rotated Belgium. There was much debate pre-game as to whether England would be better off coming second in Group G; that’s exactly what has happened and it might just work in their favour. Colombia stand in the way of a quarter-final with either Sweden or Switzerland.

Dave kept a second clean sheet for the second game in a row to help Colombia beat Senegal 1-0. Our man made a couple of decent stops after Yerry Mina’s header broke the deadlock. The South Americans topped Group H and will now play England.

Spain finished top of Group B after drawing with Morocco thanks to a stoppage-time equaliser by Iago Aspas, awarded after a VAR consultation. Nacho hasn’t played a single minute of the tournament yet.

He’s forgotten him all tournament.

Must be a running inside joke.

Nah. I’d just genuinely forgotten him! Shame on me.

Xhaka is a player on the up, we’ve tied him down at just the right time, hopefully Rambo next ?
Signing a shield for Rambo+Xhaka will give us the most functional midfield since 2010/11

I’m gonna make a big bet and say Elneny will be the dark horse of next season. Clearly a statDNA purchase and clearly not fancied by Wenger, one thing Wenger did say about him was that he was one of the hardest workers in the squad. I’m sure Xhaka will be the starter, but over the season I suspect Elneny will rise to usurp him. He’s a clean passer (though not as rangy as Xhaka), but I think Xhaka’s lack of athleticism against Elneny’s endless engine will be the deciding factor for Emery. Not sure how creative it would be,… Read more »

I thought Joel Campbell was the best player on the pitch; it was a reminder of what a club like Arsenal saw in him in the past. Lichsteiner got a yellow which puts him out of the first knockout match. He got it for a challenge long after the ball was gone with his studs planted pretty high on the shin/calf of an opponent. When I saw it again in slow motion, I thought it could have been a red, a real potential leg-breaker. Otherwise, he had another strong game (though not as much as earlier)–but we should not be… Read more »

“but we should not be surprised to see him carded regularly in England.”

I would be surprised, because I will be surprised if he gets to play regularly. This guy is much worse then Bellerin.

But then he was always a bit of a bastard…

I Didn't See It
Reply to  A Different George

Lichtsteiner! He’s got the low down on every ref in football. Assisted by his defensive partner, he hoists Mitrovic sky high, then slams him to the turf. WWE would have been proud! VAR remains mute. Ref gives a foul. Against Mitrovic!!! Hope his secret files contain loads of dirt on every ref in the EPL.

Is it me or does Ospina turn his “injuries” up a notch when he plays for Columbia?

Get out while you still can Joel!

Lichsteiner was the pick of the bunch for me. The quality of his deliveries and his link up play show a real intelligence. Although he does look like a total twat.

Good numbers from Xhaka. He looks good when given a bit of space but he’s a liability defensively and so poor when pressed. He’s not someone I’d be looking to build a midfield around.
But then I know fuck all, so it’s all good.

Kudos to Campbell, I thought he looked decent.

I agree he plays with more freedom for Switzerland. We had a few games last season where he was freed up by having Elneny along side him. That’s when he really shined. He’s a creator first, positional discipline is 2nd. As much as Ozil is best as a 10, I think it’s more valuable to have a 3 man midfield, Xhaka, Rambo, Torreira would be about as beastly a midfield as anyone.

The problem with Xhaka being pressed is Ozil has a free role and Rambo also got a lot of freedom which left him isolated, he’s also not a defensive midfielder. Playing with a No10 when Santi was fit gave us someone who could beat the press and get the ball forward early to Ozil, it’s the reason why Ozil’s numbers were so much better with Santi behind him, and the reason why our win rate was ridiculously high with Cazorla in our central midfield. We could move for Kovacic who could do a similar job to Santi to accomodate Ozil?… Read more »

it doesn,t matter what we do with ozil, he will still be getting £350.000 p/w, maybe we could sell him cheap, to make up his wages, or maybe loan him out, but at the end of the day, I think we are STUCK with him

Ozil is a very flexible player, whose key talent is matching his passes to his squad. The poorer the squad, the poorer he looks. The better the squad, the better he looks. I would fathom that Emery is looking to make Arsenal a better counter-attacking team, given the current signings, and that would actually suit Ozil’s movement a lot better. He has the stamina and endurance to play in that kind of a set-up, and it will make Arsenal less brittle, taking better advantage of Aubameyang, Mhky, Bellerin, and our MANY speed stars. In my opinion, everything looks as perfect… Read more »

I’m not sure I agree, but a serious, thoughtful argument about Ozil’s role, appreciating his strengths and weaknesses. Thanks.

Why is there no mention in the player review of Joel Campbell’s assist from a corner for Costa Rica’s first goal against Switzerland?

I know that the Arseblog team may not rate Campbell, but if you’re gonna do a player review at the World Cup, at least do it properly.

you just beat me to this. was a solid delivery into a dangerous location.

He’s clearly never fit in with the club for whatever reason, but our serial loaning of him has only delayed the inevitable sale. Seems CRC have always known how to use him.

We love Campbell but he doesn’t even start for Costa Rica. Maybe the season at Arsenal was his best and even then only in terms of dedication. He needs to prove something at one point.

Xhaka has had a fine tournament.
A lot of people seem to have England as strong favourites against Columbia. But I have been impressed by Columbia. For me it’s a 50/50.
Ospina to make the decisive penalty save against Kane….