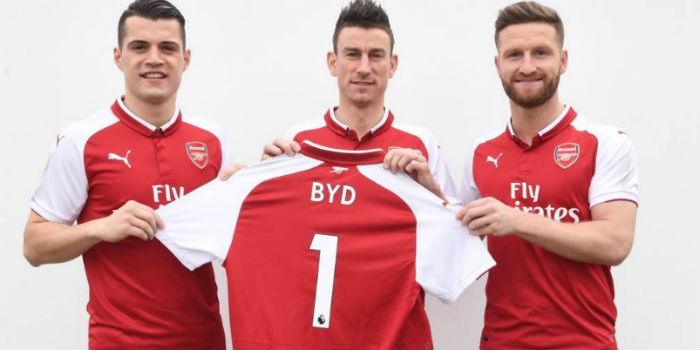 We’ve covered some weird stories on Arseblog News over the last seven years and this is right up there.

There was the usual congratulatory statement from chief commercial officer Vinai Venkatesham and this was backed up by warm words from Sherry Li, BYD’s brand and public relations director.

In simple terms, BYD became an official partner of the club, at the same level as brands such as Cooper Tires, Gatorade, Vitality and WorldRemit. Presumably, the club’s coffers would have swelled as a result of the deal while at the same time giving us a useful platform for Arsenal promotion in China and the Far East.

Alas, all is not as it seems.

We have found some illegal entities and/or individuals carrying out advertising business by forging our company’s seal and/or conducting it on behalf of our company (“Fraud Issues”). We made a statement on our website on June 13th 2018. The criminal suspect Li Juan (English name: Liki Li) has been detained by the Chinese Public Security Authority after our reporting.

Hereby we reiterate that BYD was never involved in and is not responsible for any fraud issues. Please make sure to report to the authority responsible whenever you find yourself a victim.

BYD has informed Arsenal that they believe they have been the victim of a fraud in relation to various advertising agreements. this includes our partnership with BYD which was formally launched by both parties at an event at the Emirates on 8th May. We are investigating the situation and discussing it with senior level BYD representatives who were involved in the launch of the partnership. We will make no further comments on this matter.

Bloomberg has pieced together a few more details and it appears somebody has been posing as a BYD employee and signing unauthorised marketing contracts in the company’s name. Including the one with Arsenal.

The person in question, a woman called Li Juan, has been arrested by Shanghai authorities.

BYD claims that Li has never been an employee but, according to China’s Global Times, that didn’t stop her from renting offices in the company’s name, forging a BYD stamp and undertaking advertising deals with a number of companies. For three years!

It’s all a bit ‘Catch Me If You Can’. Quite how you get this far in the digital age is amazing. It’s actually quite impressive. Not that we applaud criminal activity.

The situation has taken an immediate toll on BYD with the company falling by as much as 5.1 percent in Hong Kong.

We contacted Arsenal for a comment but were informed by a club spokesman that they have nothing to add to the original statement.

As we said at the top of the article, it’s all very weird. We’ll keep a close eye out for any further developments.

Thanks to @RYO_cleverfish for the heads up.

“It’s all a bit ‘Catch Me If You Can’. Quite how you get this far in the digital age is amazing. It’s actually quite impressive. Not that we applaud criminal activity“. – but we have to admit we’re quite impressed ?

This stuff happens more often than you think…

“Should I bother with due dilligence…. well it’s 5 PM…”

Bizarre that this could have happened and no-one at the club realised or there was no contact with bona fide BYD people separately etc etc.

Let’s hope we haven’t wasted too much time and lost too much money (from other genuine sponsors we could have got) as a result.

Newly appointed BYD security expert Joey Joe Joe Junior Shabadoo has just announced on twitter “All OK now, Arsenal and BYD are fine and also a message to the police, you totally don’t need to look in to this any more, it’s all sorted, so please stop worrying about it, thank you.”

Thats’s the worst name I ‘ve ever heard.

That’s not very nice. I think Chris is a fine name.

Well made in china ?

So for our part, there is no due diligence etc prior endorsing this partnership? It can’t be all that time we only communicated to this one lady.

You’re right, G & R. Assuming that the promotion deal was potentially worth more than $5, you’d have thought that some of the Arsenal staff would have made the trip out to China and been shown around the BYD plant.

I’m definitely not buying this story…. How do you go weeks without noticing your company has “allegedly” signed a sponsorship deal with one of the worlds biggest brands, before realising you’ve not authorised it, or you don’t even have a marketing department…? So there’s nobody to authorise a deal even if you had authorised it? There can only be three outcomes here: 1. The CEO and board are in on it. 2. They have dementia 3. They’re the least observant and most incompetent board on the planet, and if they’re even more incompetent and less observant than the current Arsenal… Read more »

These ‘agents’ probably had some insider at the company to send out communication on their behalf, give them access to company seals and letter formats etc. BYD might even have been looking for a sports team to sponsor. These agents probably hoped to deliver them a ‘done deal’ and demand a cut of it. BYD are not going to admit that the problem (mole) lay at their end. Easier to say they had nothing to do with the company at all, and reevaluate options from there. Of course, maybe there’s more that Arsenal could have done. But honestly, these things… Read more »

Less the board’s incompetence, more highlights how bad/dodgy/incompetent the commercial department is. Our major partnership deals aren’t great when compared to Utd or Chelsea even, both built on contacts and standing form a business & football perspective. Arsenal are playing catch up scrambling to get the most money possible at the moment, instead of building brand relationships, and it’s easy to see the team being duped at the sight of the Chinese yuan signs.

I’d not heard of BYD prior to this announced partnership. Probably? Best exposure in the sporting community for the manufacturer. As cyber-security firms seem to do with talent they catch? BYD should have hired Li Juan straight away– and kept the scam under wraps.

So were the senior level BYD representatives fooled into attending the launch of the partnership at the emirates? This is really wierd. She must be a genius. I would love it if a movie was made from her actions, all these new crime capers are too predictable.

Gives quite a bit of insight into the management style used at BYD. Lots of free reign.

Arséne resigned because he didn’t want to be involved in this???

This doesn’t make much sense, because if they’re sponsoring us, surely they are the ones sending us money? How could this woman has profited from it? Unless she actually does (or did) work for them and this was all just for some free publicity, which was always going to backfire horribly at some point anyway..

I would assume she acted (literally) as some kind of intermediary, brokering the ‘deal’ and taking a fee from Arsenal. Once the money’s in the bank, change name, close company, move on to another sector.

But yeah, it’s outlandish to say the least.

Ahhh the old….. “I have a stamp for the company name part of the check, all I need is your signature….” seriously not funny enough if true!! 🙂

Maybe she said: “OK Mr. Gazidis, I give 20 billion to Arsenal but to transfer money we need to pay costs so you send me 100k first.”

Breaking News. The woman is a Nigerian prince.

She is a man? Very cunning.

Ya gooner
Reply to  Pedant

I wish I had seen this post before I repeated it. 🙁

Was Dick Law doing this deal? Sounds a bit Joel Campbell to me.

I was hoping this meant we could stop calling it Emirates Stadium.

Stuff like this has been known to happen, even outside of China. You go to party A, present yourself as an agent of B and negotiate a deal on really favorable terms to A. Go back to B, say you’ve been working with A, and present a deal with really favorable terms to B. Get commissions/payments on the “deal” from both A and B. Forge a bunch of paperwork so A and B don’t realize that they have each agreed to totally different terms. And by the time they do, you hope to be many thousands of miles away. As… Read more »

I doubt she spent three years posing as an employee of BYD just to be able to broker a fake deal with Arsenal this summer, so it hardly seems like she was planning to be thousands of miles away. It sounds like she had a nice ongoing scam operating. Perhaps Arsenal were somehow involved in finding her out? Maybe we should charge BYD a consultant fee.

This makes no sense. How would the woman gain any money from this?

You may have spotted the slight flaw in this extremely cunning and well executed plan.

I’m in the advertising industry so it wasn’t hard! 🙂

It’s not unusual for agents or brokers to get paid as, or soon after, the deal closes. An employment agent in the IT field once tried to convince me to take a job with company X, and I would then quit after 30 days. He would be paid the commission after 28 days, so he offered to split the moolah with me. Would have been somewhere around $15,000 commission. There were too many negatives in it for me, even beyond the obvious ones such as “it’s dishonest”. How could I guarantee that he wouldn’t just waltz off with all of… Read more »

Its the wild wild East in China.

As they start to take a lead in various industries (electric vehicles namely), they will have to clean their act up. They are now the victims of their own earlier ambivalence towards plagiarism.

So probably a good thing.

Surely the club would have noticed when they didn.t get paid any money???!

The broker gets paid at the close, or very soon thereafter. No need for any real money to change hands between the principals before the agent does a runner.

Wenger never would have let this happen…

Ummm …. ever heard of a guy named Sam Allardyce?