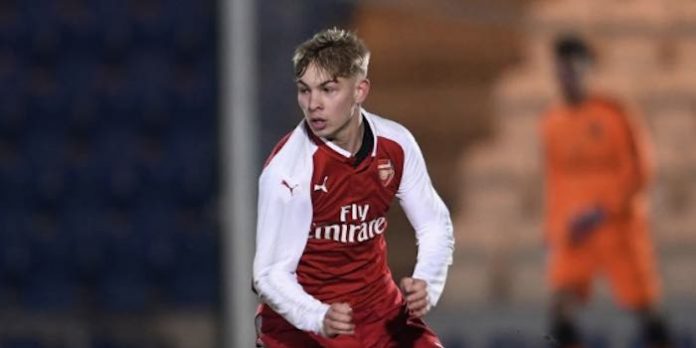 Pre-season is typically a time when young players are given opportunities to impress in the first-team, and that was certainly the case in the 8-0 thrashing of Boreham Wood yesterday.

Arsenal, as had been expected given the strength of the squad they took to Meadow Park, were utterly dominant and two youth players managed to get on the scoresheet in Reiss Nelson and Eddie Nketiah.

Jordi Osei-Tutu, who is usually deployed at right-back, impressed at left-back as he defended well and also pushed forwards to excellent effect, but it was another prospect who really stood out, with Emile Smith Rowe seizing his opportunity in his maiden first-team appearance.

Last season Smith Rowe underwent the transition from winger to central midfielder and he was impressive in the latter position against Boreham Wood as he linked play extremely well and also demonstrated his excellent technique.

The 4-3-3 formation which Unai Emery deployed seems to suit Smith Rowe, who also tracked back well defensively when required, and this certainly won’t be the last that we will see of him in a first-team environment.

Smith Rowe will be aiming to make the squad for Arsenal’s upcoming trip to Singapore, although competition for places could well be fierce with players returning from World Cup duty.

His display yesterday, though, indicates that he is capable of adapting to the demands that Emery requires of his players and he seemed on the same wavelength of the likes of Pierre-Emerick Aubameyang and Alexandre Lacazette.

Smith Rowe has been compared to Kevin De Bruyne in terms of playing style and the similarities are striking in the way that they are both capable of dictating the game.

Of course, Smith Rowe has a very long way to go to match De Bruyne’s standing in the game, but yesterday’s display was a small but significant step in the right direction.

It is anticipated that this season the England youth international will, at some stage, make his competitive debut for the first-team, which is likely to come in one of the cup competitions.

Joe Willock, in contrast, wasn’t quite at his sharpest against Boreham Wood. The midfielder seems slightly taller and stronger physically since he was last in action but he struggled to impose himself and sent a couple of efforts over the target.

The arrival of Matteo Guendouzi, who had an encouraging cameo appearance, could push Willock down the pecking order and may lead to him heading out on loan.

For Smith Rowe, though, further first-team opportunities are likely to be on the horizon.

Nah. It’s Boreham Wood. Remember Zelalem? Some of the youngsters deserve to be in and around the first team but the majority should go out on strong loans. 1) Nketiah/Nelson – Both were good value. Nelson in particular looks like he has slightly more to offer in wide positions particularly as we are lacking pace and trickery in that part of the field (sans Bellerin having to vacate space at the back to make difference further up) Solution they take turns to go on half season loans maybe or keep Nelson send Nketiah out to develop. 2) The Jeff and… Read more »

Not you again. Incessantly negative and spouting your opinion like it’s gospel. Unless you are a Premier League manager in disguise then you have absolutely no right to use the tone you are. The worst kind of fan – a know it all. Surely the fact you get down-voted to the point of embarrassment every time you post anything shows you need to have a think about how you phrase things on here. Fine, have your opinion and I’ll never tell you you’re wrong, but don’t express it in a way that implies you are dismissing everyone else’s. It’s just… Read more »

“Not you again. Incessantly negative and spouting your opinion like it’s gospel.” I wonder how this is different from 50-90% (depending on the day) of those who comment here? (Or commented 4 months ago. Who knows, maybe none of those folks come here anymore?) Santori’s commenting here for quite some time, and it’s always been the same, from the very beginning – a bit too long, quite subjective, and very repetitive. Despite that, he was rarely severely downvoted, so again, I wonder what’s the difference? But hey, maybe there is a hint that will help us solve this riddle: “have… Read more »

“Naturally the famously facile Arsenal faithful appalud the shiny new signing” – this is touching on others opinions with a broad brush. Its rude and it doesn’t help anyone.

Just a bit of a arlarse really.

The provlem, Wreh, is that as a man of high self-awareness yourself, you assume/rightly expect someone like Santori should have some level of self-awareness about himself.

Sadly, I’ve come to accept he simply just can’t see anything beyond his own version of the world.

Why are you always unable to stay on topic without going off on some negative tangent of a rant/thesis?

And why is it somehow you always have to have a dig about Elneny? Dude didn’t even play and you’re still bitching about him.

Good lord you are annoying

Really hoping we see some top British talent emerging in the PL over the next few years, the Youth teams have been doing well consistently.

On a separate note, well done Oliver Giroud World champion ?
Still the holder of the greatest Arsenal tweet of all time:
“I apologise to my wife, family and friends and my manager, team-mates and Arsenal fans.”

Pure brilliance, cracks me up every time I see it ?

There’s nothing quite like the public eye to live out a mistake but fair play to Giroud for how we has conducted himself professionally. I’m sure Lacazette must find it frustrating to be out of a world cup winning squad whilst the man he replaced lifts the world cup. Each manager to his own I suppose and if nothing else it shows that the team is more important than the individual.

Giroud is brilliant, certainly one of our most under appreciated players in recent seasons, Chelsea did well to get him for £16mill, you’ll struggle to find a better ready made striker for that type of cash.

I hear they’re willing to sell him now though…any chance we could shut him back for £7/8 mil (I wouldn’t mind at all)!

Well done by your teammates Olivier, you didn’t have a single shot on target in the tournament but who cares? Maybe Sarri but it did come home for real, after 20 years.
His tweet is second to Santos :
Well done gays !!!

food for thought
Reply to  Rich

Giroud has always been a great target man. strong, holding up ball and linking up play perfectly.
His style of play meant that the team needed 2 direct running wingers like Salah and Mane type in order to plunder in great amounts of goals.
Unfortunately our flank player have always been playmakers instead.

So true.
Made worse by the fact we either didn’t cross, or the players who did cross were terrible at it (Bellerin).

Strangely, only decent consistent crosser we had recent years was Theo. One of the few things he learnt to do really well and consistently.

Hope he takes his chances this season, looked promising. And yes, Willock should go on loan.

Apologies if previously mentioned, but The Jeff has come back a different beast! He has grown about 3 inches and now built like the proverbial… The youngsters looked good. Only BW.. Blah blah.. But its our Arsenal back! Love this bloody club!

Good to see he’s been on the Weight Gain 4000. From what I understand he had a decent close to the season on loan. Such an exciting time for the youth and the whole club. Hurry up 11th August.

Been singing his praises of his Angers loan.
We’re excited about a ton of players, but I think he’s going to be one of the surprise packages.

Also helps that in a team now lacking dribblers, he’s one that just a loves a good take-on.

The Jeff doesn’t even get a mention in this article.

Have some respect, Sanogo was still an Arsenal player

and yet he never got a mention on the arsenal website.