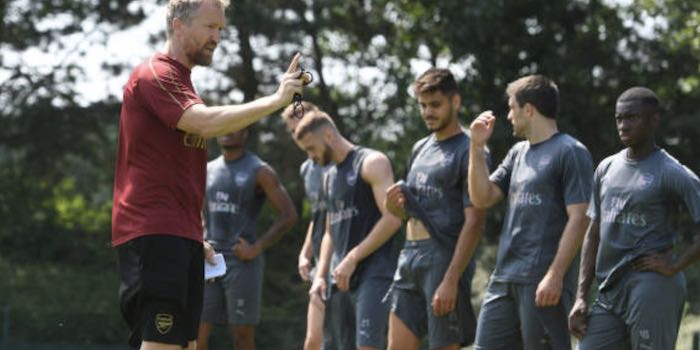 Last year Arsenal appointed Darren Burgess as Head of High Performance, securing his services from the Australian from AFL side Port Adelaide.

At the time it was reported that there would be a ‘strategic partnership‘ between the two clubs, which could go someway to explain another appointment from down under.

Local press report that physio and sports scientist Tim Parham – head of their rehabilitation program – will make the move to North London to join up with his former boss.

It’s the latest in a series of changes behind the scenes after the club terminated the employment of Colin Lewin in the wake of Arsene Wenger’s departure.

Club doctor Gary O’Driscoll has become the new Head of Medical, while earlier this month former Liverpool and Crystal Palace physio Chris Morgan was announced as a senior first team physio with us.

“Tim came to Port Adelaide when Burgo did so I’m not sure what role Darren had in the decision making process but no doubt Darren will know what he’s getting when Tim gets there.”

Burgess on ‘forced recovery’ and banning phones at London Colney

I worry that we’ve now reached a Wenger bad mentality. Appreciate that people recruit who they know but is everything associated with the past always bad?

How about we just the people who’ve been hired to do a job actually do their job? Not like any of us are able to assess if the curreny physios are good enough, let’s trust in the Director of High Performance in his assessment.

Also, if he makes the Arsenal High Performance department 80% as good as Port Adelaide then we’ll be in a better position.

People just worry about nothing most of the time, just because they hate change.

Tim is a year too late – perhaps he would’ve been able to properly rehabilitate Cazorla last year. Cries.

Huh. Cazorla had a bacteria infection in his tendon after the surgery. No idea how physio would help there.

You’re right. I thumbed myself down. But can I still cry for Cazorla?

No, because Santi would want you to smile. I don’t know the man but I nevertheless feel sure of that.

Darren Burgess. I am just assuming, but from context, that is what I got.

Just in case you were questioning their Australianness. Its actually against their constitution to use the full and correct name to refer to any other citizen. True story. 😉

This is very true, but unlike Jamie Carragher, none of us have the bright idea of referring to Arsene Wenger as “Arse”

What’s your full name then?

As an Aussie who loves Arsenal and hates Port Adelaide, this makes me very happy.

Maxin In The Shade
Reply to  Damo Dinkum

I’m an Aussie who loves Arsenal and am a die hard Port Adelaide supporter – and this makes me happy as well.

As for today’s game v Fremantle. Woeful.
Equal top to play for and that’s what we serve up??
?

Jim
Reply to  Maxin In The Shade

Shrimp on the Barbie, chaps.

Literally none of us Aussies call Prawns “Shrimp”. No idea where that saying came from but we do love a good Barbie, and prawns is one of the last things we put on there.

I seem to recall hearing that it was because of an American advert by the Australian Tourist Board (or something like that) with Paul Hogan. As Americans apparently wouldn’t know what a prawn was, the line was “throw another shrimp on the barbie” rather than prawn.

Damo Dinkum
Reply to  Maxin In The Shade

True that, with no Fyfe and Sandy too. Like losing to Burnley when you’re pushing for the title!

The AFL. I probably would of enjoyed the game, but as a born and bred NSWman, my introduction to the game from down south was one Warrick Caper and his escapades at the Swans… I just couldnt get into the game after that.
Loves me some Rugby League though.. dragons!

And our daily transfer streak continues!

haha, Arsenal´s official twitter account put in so much more effort to congratulate him than Chelsea´s one

The FHB is still a gooner for me

Will always be a Gunner for me too, and what a beautiful way to answer his critics. So pleased for him.