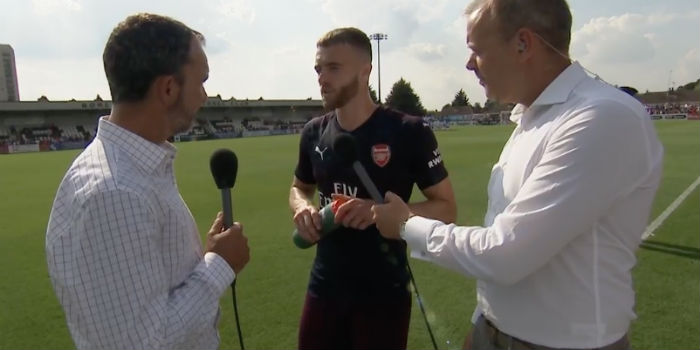 Calum Chambers says he could ‘grow to enjoy’ playing in the centre of the park after Unai Emery asked him to anchor Arsenal’s midfield in the second half of their 8-0 friendly win over Boreham Wood.

The Gunners, courtesy of a hat-trick by Pierre-Emerick Aubameyang and strikes from Reiss Nelson and Alex Lacazette, already had a five-goal advantage when the Spaniard opted to make eleven changes at half time.

Chambers sat behind Aaron Ramsey, the Jeff and Henrikh Mkhitaryan with the latter two finding the net, alongside Eddie Nketiah, to complete the rout.

After the game, the England international was asked about his new position.

“The manager spoke to me about the position,” he told Arsenal.com.

“It’s a new one for me. I played there a little bit growing up. It’s a position I feel like I can grow to enjoy and out there today I felt good, I just need to train and practice in games in that position to get comfortable.

“Obviously you can’t do it all the time, you can’t take risks and when it’s not on you can bounce it backwards at an angle for someone else to play through the lines.

“But if you can get on it and you have time and it’s not a risk, turn and play forward and that’s the best way to get through a press.”

We’re not going to read too much into Chambers playing in midfield. It looks as though the decision was taken to give game time to as many players as possible and with so many centre-backs fit and available, he was deemed the most versatile to play elsewhere.

Lucas Torreira and Matteo Guendouzi, who came on for his debut, are far more likely to challenge Granit Xhaka for the position when the season starts.

On the game itself, Chambers added: “It’s our first game of the season and first friendly so it’s always going to be tough and conditions didn’t help either, but it was a good test for us and a good run out.

“It’s important we put into practice what we’ve been learning on the training field and I think we did that today.”

Unconfirmed reports suggest that the eleven players that started the game boarded the team bus soon after being substituted so they could get back to London Colney in time for an evening training session. It certainly appears as though the boys are being put through their paces.

From match venue back to training ground immediately!!! Love it, “no dulling” at all. Arsenal to win the Premier league 🙂

Read it was a cool down session, not like they had to run like mad for another two hours.

Bring back our players rating

Is it going to suffer under this new arsenal regime where we basically know who we’re signing? Ah well!

I remember when we signed him, Wenger saying how CDM was a position he could potentially grow into. Interesting, and if this is in Emery’s thinking, then a/ I wonder if that speaks to notes compiled on him over time, ie inherited thinking, and b/ there’s a lot of competition with Xhaka, Torreira, Maitland Niles and Chambers, for (what has been) just one position.

He’s better off trying to seal improvement in defense.

The new Greek chap is fat and slow. We will be torn apart by the likes of Sane, Sterling, Mahrez.

Don’t think Xhaka and maitland-niles will be deployed as the holding player tbh, outside of torreira who is really a “DM” of the rest? Xhaka is a playmaker and Ainsley seems more box to box

Won’t lie , got turned on reading all the technical stuff about the press and how to beat it. Looks like Emery is a very efficient conveyer of ideas if that’s what he did with his broken ( understandably so ) English.

That’s also the part i enjoyed. It’s nice for once to hear an acknowledgement of the tactical challenges the opposition possess and our tangible response to them instead of the meaningless soundbites we’ve been fed over the years, like “believing in our technical quality”, “sticking to our values”, or the customary post match “we played with the hand break on”. The truth is we played as we were coached, which gave scant regard to the opposition, and our results, especially against teams who could match our technical quality, reflected that. Will our results be any better this season? who knows,… Read more »

Where is Kristian Bielik? I nursed great hopes for that youngster when we signed him. Another one who could develop into a beast in the defensive midfield.

The Goo-nerd
Reply to  CorporateMan

And Gedion Zelalem for that matter…

Which is why its too early to be applauding Guendouzi.

The Jeff gave a better performance but fans only want shiny new things.

Yes, Boreham Wood. But… Identifying key elements, missing more elements input setup to address the biggest trend in the modern game, the high press. Identifying the missing piece (Torreira) and getting him. Identifying internal options. Obviously spending time educating individual players on the necessary tactics re the press. I don’t know that Wenger didn’t do the tactical part, but we consistently complained that the team didn’t adjust and the players behaved like they didn’t have clear roles or tactical direction. I think those days are gone. I’ve definitely felt that we have been performing below the talent level of our… Read more »

santori
Reply to  Greg in Seattle

Chambers. Poor passing at DM. NO thanks.

Awareness of his surroundings, ball movement and passes were poor. Speed of thought is rather slow.

I’ve been saying for 2 years that Chambers should be playing and learning the defensive midfield role. He’s a good player, but lacks pace as a full back, and at centre back he also lacks aerial ability. But he reads the game well, and has good technique, so defensive mid is where he should be.

Kwame Ampadu Down
Reply to  Richie

The first thing this Arsenal team needs in a DM is pace. If he lacks pace at full back then he will lack it at DM too. I think as blogs said this was more to do with getting everyone a game rather than a long term plan to play him there. He’s potentially a really good centre half so let him play there & develop him.

Completely different positions, you cant suddenly become a DM, mertesacker didn’t have much pace but was a formidable CB

His passing was also mediocre.

Wenger mentioned that he could play there before and I think he might have done it once for us. Makes for good competition alongside the others.

Wenger’s too old to play there.;)

He wasn’t that great in midfield Chambers. BUT worth experimenting bc we still don’t know our fortunes there with the new Torreira coming in and maybe lack of depth beyond him and AMN. Chambers though IMO : Better he stays in back 4. Others auditioning : Jenko – unconvincing. Plenty of drive byt lacks quality. L Perez – rolled his shorts up ala new Alexis, got involved. Maybe a chance for him if we should not add any more from market and if Emery feels he can get something out of his fellow countryman yet. Nketiah and Nelson – hard… Read more »

I gave this a thumbs down because it was too long to bother with and automatically assume you’d have said something I disagreed with.