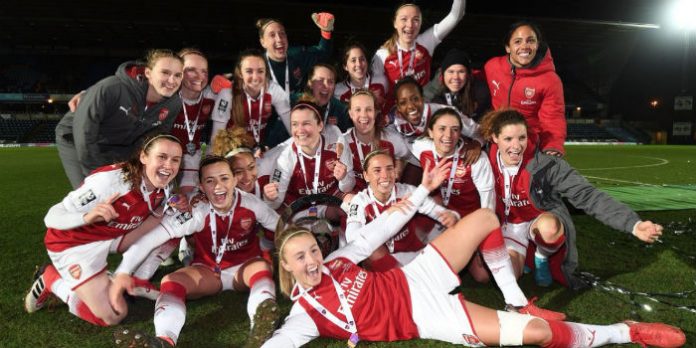 Following on from the departures of Shannon Cooke and Anna Filbey, several more Arsenal academy graduates flew the nest this week. The highly rated Gabby Ravenscroft and Kalani Peart are joined by Lia Cataldo and Beth Lumsden at Millwall Lionesses. The Lionesses have just appointed ex Development team coach Chris Phillips as manager and previous Gunners boss Pedro Losa to the Director of Football role.

Millwall lost a lot of players over the summer and their squad has required swift recruitment, so it’s little surprise that Phillips and Losa have looked to Arsenal’s academy to reinforce. It does raise a wider question about Arsenal’s academy team and the opportunity to blood young players.

England announced their squad for the U-20 World Cup this week. There are 4 graduates from the Arsenal academy in total, but all have left the club in recent years. Highly rated players like Gabby Ravenscroft and Kalani Peart will quickly become first team players at Millwall, whereas their pathway at Arsenal is less clear.

That’s natural for a big club competing at the top end of the top flight. With Arsenal not engaged in European competition, there is less opportunity for the sort of squad rotation that often sees young players afforded opportunities. Last year, the Gunners played their full team in the FAWSL Continental Cup (the League Cup equivalent) even in group phase games against vastly inferior teams.

Chloe Kelly and Taylor Hinds feature in that U-20s squad, both of whom were squad players at Arsenal but joined Everton for first team football. However, there is another side to this coin. Anna Patten and Lotte Wubben-Moy feature in the U-20s squad. Lotte and Anna were ever presents in the Spring Series last year at the heart of the Gunners defence.

Both earned scholarships at American colleges and this is a very attractive career offer for young British players, who can study and maintain the chance to play high level football on a full-time basis. Patten and Wubben Moy didn’t suffer for opportunities at Arsenal, but the exposure they gained from playing first team games saw them snapped up by Universities stateside.

Promising centre-half Shannon Cooke moves to Louisiana State this fall. It’s a great opportunity for players, who can always come back to England the WSL at the conclusion of their studies. Lotte Wubben Moy is still in close contact with Arsenal and she is currently training with the club whilst on vacation from her studies in North Carolina.

The issue for clubs is that they are not compensated when Development players leave for the US. They are too young for professional contracts, so the clubs don’t see a penny for their efforts. The FA sought to stem this bleed of young players moving to the US with a controversial ruling earlier year that means the association no longer pays for their flights back from the US for junior international matches.

So from here on in, if Lotte, Anna and Shannon are called up to play for England, they have to stump up for their own flights. It’s a risky strategy and one that punishes the families of players. Arsenal and other clubs are lobbying for a rule change that will see them earn some kind of compensation when academy players hop the Atlantic. It is also not permitted to send players under the age of 18 out on loan, which causes a further issue for clubs like Arsenal.

In the case of Ravenscroft and Peart, both highly rated junior players, a slightly better league structure in the Championship means they will be able to play competitive football more quickly. Player churn is much higher in women’s football due to the rarity of transfer fees, player movement is a far less drawn out process, so the idea of dropping down a league is more attractive for a young player. Women’s football is a smaller world, so the prospect of being ‘forgotten about’ is less of an issue.

New Development team boss Lauren Phillips will have her work cut out overseeing some of these challenges. As part of the FAWSL restructure, the FA outlined solid academy structures as a condition for membership, “A new ‘Academy’ structure at tier 1 will extend and enhance the talent pathway, ensuring appropriate high-quality player development and increased support (including dual career opportunities) for the 17-20 age group,” which, as Arsenal are finding, is easier said than done.

NEXT SEASON’S FIXTURES
The FA have confirmed that fixtures for the FAWSL and the FAWSL Continental Cup group stages will be confirmed at 11am on Wednesday, 1st August. The Conti Cup will begin on 18/19 August and the FAWSL will commence on 8/9 September.

PRE-SEASON FRIENDLY V JUVENTUS
Tickets are still on sale for the prestige friendly against Serie A champions Juventus. The match takes place at Boreham Wood’s Meadow Park on Sunday, 5th August at 2pm. Tickets are £6 adults and £3 concessions and are available here.

UPCOMING ON THE SITE
A bumper article on Vic Akers will be published on Monday. I spoke with head of Arsenal in the Community Alan Sefton, who was a long-time colleague of Vic’s and Faye White, who was the captain of Vic’s all conquering Arsenal Ladies’ team for 14 years. Look out for that on Monday. I will also be speaking to manager Joe Montemurro after the Juventus friendly about the season ahead.

The opportunity to earn a degree without taking our a loan is fantastic! Hopefully, they will go onto be successful no matter what they decide to do in football.

Got to agree. If they were good enough to be 1st team regulars and professional at Arsenal then they probably would have stayed. Nobody should look the proverbial gift horse in the mouth

Now that we know more about player transfers, it’s all kinds of frustrating really. One hand you have talent at clubs being snap up for free, another to not have a stable/conducive environment for talent to want/able to stay to progress further in both studies and pro football. ?
Anyways, looking forward to the articles and enjoy the Juve match!