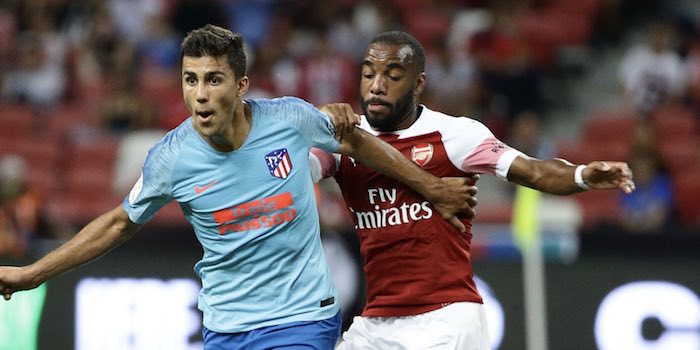 Arsenal under Unai Emery are set to play a high pressing game, and we got some evidence of that in the game against Atletico Madrid yesterday.

The new boss could be heard shouting instructions to his players from the sidelines, and it was clear they were under instruction to win the ball back quickly as much as possible.

This new tactical approach, something touched on by Aaron Ramsey earlier in the week, is distinct from that of Arsene Wenger and two of the current players have reinforced that.

Alexandre Lacazette is hopeful it’ll see the Gunners become a more potent attacking force, as he spoke about what the instructions from the Spaniard are.

“High pressure and positioning,” he said. “We want to keep the ball.

“This can be good because we can have the ball higher and we can have more chances than last season.”

While defender Shkodran Mustafi said, “Unai has given us a few different ideas tactically. He is a fan of a different kind of football from Arsene. It’s difficult to compare because they have their own thinking about how they like to play football and, to be honest, I am happy with both.

“From what I have seen in the last few days, Unai’s a manager that you can be successful with.

“I don’t know how long it’s going to take for other people to get used to the head coach, but for us players, it’s already done.

From the first day, he told us what his philosophy is, what he wants to play, and I think for us players it is important to get that as quickly as possible.”

“I think we’ve adapted really quickly and I like the philosophy that the coach is bringing in.”

How refreshing!! A manager who actually does tactics!!!

Give it a rest.. honestly.

Different tactics. You can’t produce the Invincibles without tactics.

Unai’s approach will probably go some way to better appeasing the ‘Run araaahnd a bit’ crowd though.

And really, the squad was seriously lacking most in Team Defending before, admitted by Arsene’s own words many times. That’s where the trusting vs coaching the players may well make a difference.

Hopefully now when Ozil closes down a player (as he really does do) it will actually mean something rather than just wasting energy closing down only for that player to have 4 unmarked passing choices. I’d give up and gesture at my team too if I had to deal with that.

Not sure why this comment is so unpopular (perhaps due to the author..). I love Arsene but these last few years it’s difficult to argue there were really any tactics in place. And if they were they were totally wrong- which would have been worse?

I fully expect him to negatively benchmark Arsene well into the next decade no matter who we have in charge.

It’s all so unnecessary.

The biggest issue I had with Wenger’s tactics was his belief that you should stay calm and things will fix themselves. The Atletico semi was a classic example – we were 1-0 up and against 10 mean, and we needed to GO FOR IT and exploit our advantage, but the team were pedestrian. If there’s a single thing Emery will almost certainly do to improve Arsenal, it will be to add more urgency.

One of them is lying!
Reply to  Savage

It was a Koscielny blunder that led to Atletico Madrid’s away goal. With defence like Atletico, it was always gonna be hard to find a way through after that…even with 10 men.

but that’s a bit of a simple comment as someone said above you don’t win 3 lg and 7 fa cups in 22 (and come that close to winning the champions league) yrs without a sugar daddy in many competitive competitions by ‘not doing’ tactics. we dont even know how good we will be under the new manager. Lets all be to quick rubbish Wenger’s legacy is all i am saying.

Wenger’s tactics is one of the best i’ve ever seen in the game. Just that his players lacked game management skills.
You don’t win against 2-1 against peak Barca without tactics.
That was a Barcelona with Messi, Xavi, Iniesta, Busquets and David Villa.

One game, years ago, as an example! What about all those times we lost to teams like Stoke, Blackburn, and newly promoted sides??

Many former players have gone on record about the lack of on-field instruction and how they had to sort it out themselves.

You understand that was a tactic right? It may not have been right but it is idiotic to say Wenger doesn’t do tactics.

He also had no tactics against Chelsea in the FA Cup Final. What a fluke.

That was down to player mentality. Based on the previous comments….everything was due to no tactics….Wenger is an easy scapegoat. But how come we seemed to “struggle” against “weaker”/smaller clubs. That is due to lack of spine/effort on the players part…..not tactics.

Remind us about the 2nd leg…

Agree, tho I think Wenger was best ever manager I seen playing 4-4-1-1. Which he did from day one through the invincible season and up to where he signed arshavin. And I thought Wenger gonna play arshavin as the one behind r.v.p. or Emmanuel A. But Wenger then switched for years to 4-3-3 like barcalonena ( light). And it didn’t work because Theo didn’t tackle like Freddie or parlour. Arshavin was never a winger. The 4-4-1-1 was not broken Wenger why did you switch it. When you did not know how to play and coach that way as well as… Read more »

Also refreshing? Our new 3rd kits, which are oh so minty fresh!

So fucking excited for the Man City game.

Just need Ramsey to sign and the tent in my pants will explore.

I was right with you until the last 8 words.

I think the “Wenger doesn’t do tactics” thing was a bit overplayed and inaccurate to be honest but, yeah, makes a change to have a control freak manager rather than laissez-fare.

I for one didn’t see any change in the way we played! Obviously more work needs to be done if Unai is to successfully reflect his ideologies on the pitch..

Like I said in another news thread, expecting instant and obvious change after just 3 weeks compared to 21 years of institutional culture is expecting miracles.

Took Klopp, Pep and Poch their 2nd season before they could see any discernible change, yet people are asking for an instant and obvious change by the first proper preseason game.

There was definitely change, but on the other hand I saw too much of last season as well…and that is more to do with the players than any manager. AW would not suggest players try to tackle a ball away from danger in their own six yard box and I’m pretty certain UE wouldn’t either.

*dribble* not tackle lol but you know what I mean?

There was definitely more closing down. But you need to get that system right, because you can leave runners unmarked if you get it wrong.

Funny that the new style might have suited some of the players that have left recently like Alexis and Ox more than the players that stayed like Ozil. Hopefully he and the others will adapt in time for the start of the season.

I’ll take Ozils defensive work over Ox’s any day of the weak. Ozil has decent work rate, knows how to position himself and has rather good defensive instincts on when to break formation and track back.

I get that we have to support our own players but in terms of a high press and tracking back, no you can’t compare what Ox does defensively to what Ozil does for us. Let’s get real, this is by far the biggest weakness in Ozil’s game (and the rest our team for that matter) and hopefully it’s something that Emery can address quickly.

Meh, Alexis would make one or two big track backs a match, but otherwise did very little real work off the ball.

He is really a good manager

Mustafi is here to stay isn’t he.

This “tactic”is nothing new. Wenger also tried to keep possession. If anything it roved a false security. If we don’t already know it, teams on average with low possession during the Wcup were the more successful as they looked to set up the counter like a wound spring. BUT you need the sort of players that can help you transition quicker like the Mbappe, Greizzman types who can carry it forward at speed. As for high pressure, the facile press were all over Klopp’s Gherkin pressing like this was a new innovation. Pep was doing it way before at Barca.… Read more »

Counter attack used to be one of arsenals greatest weapons. We had a solid defence that could soak up pressure, and the pace to make 4 or 5 passes before Henry would stroke the ball into the net. That was a tactic wenger once employed. With personnel to execute. You have to play to your strengths, and defending has not been our strong suit for a while, more so away from home.