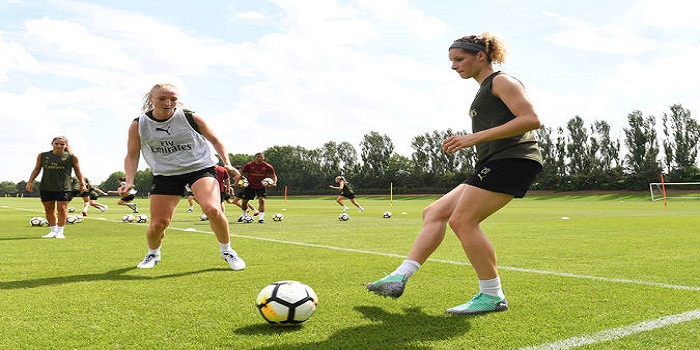 A new feature for the new season, every week I will produce a short round up of events from the Arsenal Women’s team, with a sneak preview of what lies ahead too.

The squad began pre-season training on Monday, with new signings Lia Wälti, Viki Schnaderbeck, Tabea Kemme and Pauline Peyraud-Magnin all in tow. Kemme is not in full training yet as she continues her rehabilitation from a knee cartilage tear in the spring. Jordan Nobbs is also not joining in with full training just yet having undergone minor surgery on her foot over the summer.

Dan Carter is still recovering from surgery on her anterior cruciate ligament and will miss most of the season. The girls were due to play a friendly on Sunday against Millwall Lionesses, who recently appointed ex-Gunners boss Pedro Losa as Director of Football, but the game was cancelled. The team begin pre-season with a mouth watering friendly against Serie A champions Juventus at Boreham Wood on Sunday, 5th August.

Juventus have signed English duo Lianne Sanderson and Eni Aluko this summer. Tickets are available here. The squad then fly to France for prestige friendlies against Montpellier and Paris Saint Germain in the Toulouse International Cup on August 10th and 12th respectively.

Academy graduate Anna Filbey announced her departure this week after 8 years at the club. Anna broke into the first team squad last season, but found her progress hampered by an ankle injury. Fellow Development team product Shannon Cooke has also left, having accepted a scholarship at Louisiana State University.

However, the Academy has added to its coaching staff with the appointment of Lauren Phillips as Head Coach of the U21s Academy. Lauren was previously the Assistant Manager at Millwall. She effectively swaps teams with her namesake Chris. Chris Phillips left the position at Arsenal last week to take the manager’s post at Millwall Lionesses.

Delighted that I’m now able to officially say I will be joining @ArsenalWFC as Head Coach of our FAWSL U21 Women’s Academy. Delighted to be given this opportunity to work with a talented group of players and staff at one of the best clubs in the county and Europe ⚪️?⚽️??

Next week we will have an article on the feats of Vic Akers, who retired from his Arsenal duties this summer. Vic is the founder of the women’s team and I spoke to Alan Sefton from Arsenal in the Community, who talked in some detail about the formation of the team 31 years ago. I also spoke with Faye White, the legendary captain of the 2006-07 quadruple winning squad, for an inside view on playing under the most successful manager in women’s football history. That will be on Arseblog News next week.

I have also updated the Player Profiles page to take account of new signings, departures and squad number changes.

Caption on that first photo says ‘back soon’. I can’t help but feel that’s ambitious for a player that appears to require a whole 2nd leg

Jord is a tough girl 🙂