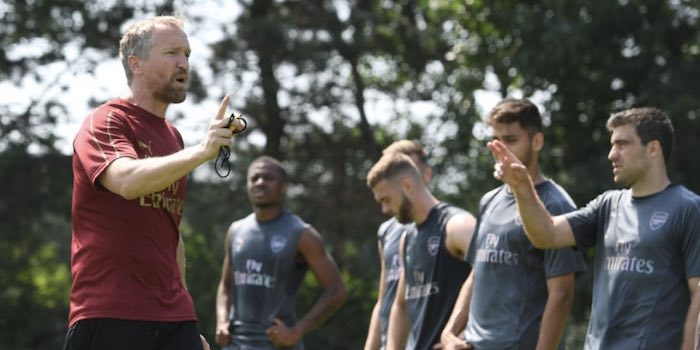 A bit of a strange story from Australia this morning as it’s been announced that the club’s Head of High Performance, Darren Burgess, is to join Southern Expansion as ‘a special High Performance Advisor upon the club being granted a new A-League licence’.

A press release has outlined the appointment, saying:

Renowned Australian sports scientist, Darren Burgess, Director of High Performance at Arsenal FC in the English Premier League (EPL), will be joining Southern Expansion as a special High Performance Advisor upon the Club being granted a new A-League licence, it was announced today.

Mr Burgess has been at Arsenal since June 2017. He previously held key technical positions at Port Adelaide AFL Club, and Liverpool FC, where he was Head of Fitness and Conditioning. Mr Burgess was also was Head of Fitness for the Socceroos team, in the run-up to the 2010 World Cup, in South Africa.

“Darren has worked at some of the biggest Clubs in both football and AFL and to have him joining Southern is a coup and it further strengthens the solid coaching and operational framework our Club already has in place,” Mr Gardiner said today.

“Working with Craig, his main priority will be to develop a high-performance structure for the Club, providing support and advice for our coaches and technical staff on training routines; technical analysis; and injury prevention and recovery, with the aim of giving our players the best chance of achieving their best performances.

“Given his wealth of experience in both Australia and the UK, Darren will mentor and train our coaches and allow us to leverage his international networks and tap-in to the very latest, cutting-edge sports science research.”

So, it sounds like he’ll be working on this from London and will continue in his role with Arsenal for the time-being.

A report in the Sydney Morning Herald states:

Burgess will continue in his role with the north London English Premier League giants, but will provide input from afar should Southern Expansion win the right to be Sydney’s third club.

Whether it conflicts in any way with the work he’s doing for us is hard to say. Perhaps he’s the man to put structures in place, then allow others to deal with them on a day to day basis, but it’s hard to imagine that Arsenal would sanction anything that would impact on the job he has to do for us.

And contrary to other reports, he is not leaving Arsenal.

Burgess on ‘forced recovery’ and banning phones at London Colney

Could be creating some kind of feeder club relationship?

Seems strange, isn’t there meant to be a “strategic partnership” between Arsenal and Port Adelaide? Wouldn’t our Head of High Performance formally advising a rival to the team we have a partnership with be a conflict of interest?

Thoughts on this chap? He promotes Herbalife! I didn’t think this was the secret to a successful athlete or sporting club?

If that’s true it would explain a few things

Shit he’s a total fraud
https://youtu.be/MlrKB9hX9rg
Anyone knows someone at Arsenal?

First the speculation about our CEO now our “Director of High Performance”. Not to mention Arsenal addressed the major holes in the squad early in the summer and signed a DM!!! What a weird transfer window, surely the worlds coming to an end!

Add to that a football club named Southern Expansion!

A friend of mine was in the Central America and told me he was attending a national league football game between Cool & Smooth vs Jennings Grenades. For a while I laughed at the joke unknowingly

Southern Expansion is just the name of the bid, not the team. The bid is for a licence in the expanded A-League and represents a region to the south of Sydney.

Just a little perspective from here in Aus. The A-League will expand by two teams in the 2019/20 season. There are currently 10 bids under consideration, Southern Expansion being one of them. Their bid is one of the most high profile, but is causing some controversy regarding their location conflicting with another club (Sydney FC – who Arsenal played in Sydney last pre-season). So it is far from certain that this licence will even be granted, and with final submissions due from each bid on August 31, there is a distinct whiff of PR stunt with this announcement. And just… Read more »

Maxin In The Shade
Reply to  Kevin Moody

No guarantees that they’ll be granted a licence, and like K Moody says above, I think it’s more of a PR type stunt.

“Look at us, we have high profile people on board! Give us the licence!”

And going by reports here (and in the listed article) it’s purely advisory – he won’t be I charge of their fitness department or anything. More like offering suggestions etc

Kevin Moody
Reply to  Maxin In The Shade

Southern Expansion announcement: We’ve signed up this highly rated specialist who has had high profile roles here and in Europe.

The reality: (Burgess to Craig Foster) Yeah, righto Foz, sure I can squeeze in a couple of Skype chats for ya next year mate…

Maxin In The Shade
Reply to  Kevin Moody

We joke, but that’s exactly the kind of arrangement I think it’ll be.

When he’s preparing Arsenal to take on Liverpool at Anfield, I don’t think he’ll be too concerned on getting Southern Expansion ready for their trip to play Central Coast!

Faisal Narrage
Reply to  Maxin In The Shade

LOL yeah, that’s exactly how it works.
It’s just an Advisory role, made to pad up their bid.

I don’t really understand what his job is anyway

What the fuck is ‘Southern Expansion’? I mean, that can’t be the name of an actual team, surely.

Nothing to see here.
This was part of his agreement with Arsenal, that he would be providing support to Adelaide and some other club(s) in Australia-rules, as it was the conditions for getting him out of the contract and the fact he’s so well-respected in Australia.

Also, many of the Head of Performances for other top clubs do external consultancy work that doesn’t impact their work. So much so I’m surprised this is even newsworthy. But I guess it’s just unusual at Arsenal and to Arsenal fans as we’ve operated very differently (note: old school) compared to most.

I thought Southern Expansion were a boy band….

A Different George
Reply to  ohhhhRockyRocky

I thought it is what happened to my body shape as I aged.

If Gazidis leaves do his appointments follow him out of the door?

I’m stealing southern expansion as a code word for
me and my mrs when my son hits puberty….

Arsenal should start doing what the group who own Mancity have done, buying clubs in different countries. Melbourne City are owned by the same mob who own ManCity and the club Viera was managing in NY.
Maybe down the track, we might see a ‘Gunners’ franchise in Aus?

Christ I hope not

Southern Expansion have no players, no club house or training facilities. It’s an honourary role to try and increase their chances of getting a spot in the expanded league. Burgo used to live and play in the area so obviously someone reached out to him and gave him money in return for putting his name to the bid. In other words, it’s all a PR stunt with no impact on Arsenal. Southern Expansion is nothing more than a power grab by a local football association trying to look impressive enough to be granted a license to join the League. They’re… Read more »

Yeah really zero impact on Arsenal even if they get the licence, and that’s a big if too. Hope the Southern Expansion bid fails, Sydney can barely support 2 teams as it is and don’t need a third team to dilute the existing fan bases. I’d like to see a Canberra team and a second Brisbane or New Zealand team before a third Sydney or Melbourne team. In saying that, if there’s more than 2 bids worthy of a spot then they shouldn’t be limiting expansion to just 2 teams, the A-League needs to grow as much as possible

Wellington will fold this season. They won’t meet their mandated five criteria to continue their license and they cost the League money, when their whole rationale was to expand the financial base of the League. If they were serious about NZ they should implement an Auckland based team but I think they’ll cut and run. I expect three successful bidders to fill the gap. Definitely a second Brisbane team, hopefully Canberra or Wollongong but I think the SW Sydney and/or SE Melbourne bids will also get the spots ahead of them… not that I agree. As long as Southern Expansion… Read more »