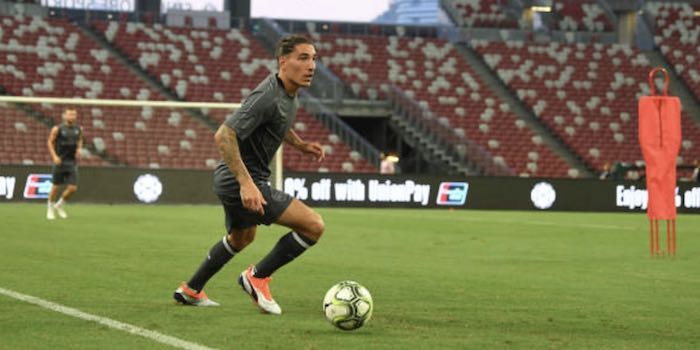 Hector Bellerin says that the team are training with greater intensity, following the arrival of Unai Emery as head coach, in order to get them ready for the kind of football the Spaniard wants them to play.

We all know at this point that we’re going to be a team which presses more often than we have in the past, and that requires both fitness and organisation.

It has upped the workload for the players, but the full-back – who this week reasserted his commitment to the club – sounds enthused by it all.

“So many things have changed at the training ground,” he said.

“Starting from the coaching, from the schedule, everything. Every coach has their own way of doing things and for us it’s changed a lot.

We are working harder than we used to work, we’re doing a lot of work in the gym. That obviously we always used to do but I think it’s turned up a notch.

“He is a coach that wants us to press, to run around a lot during the games so obviously if we want to be ready to do that in the league we have do it in training – and that’s one of the things that has impacted most on the players.”

The Gunners travel to Ireland this week to play Chelsea in Dublin, before our final game of pre-season on Saturday against Lazio in Stockholm.

Can’t wait to see it in action

Looking forward to seeing the press! You can see how it works at other clubs and it’s high intensity, we will certainly see a lot more action in the front third – As long as the fans are patient , as it will take a lot of adjustment for some, but you do feel we have the speed to deal with it – excited !

That’s great. Their all working really hard so should be fitter and up for working there way back into the top four, aint gonna be easy and it’s nice to think the team will not fold in the bigger games with this new attitude and enthusiasm.

Crash Fistfight
Reply to  89 was fine

It Is What It Is
Reply to  Crash Fistfight

As we are here, people should have (should’ve) been taught not to use “should of”.

I’m now on my way to get a life. Rain coat please.

Super Joshi
Reply to  It Is What It Is

“Here here” – that one infuriates me.

“if we want to be ready to do that in the league, we have to do it in training” I wonder if that’s a bit of a Wenger dig.

😀 😀 😀 The comments section never cease to get me my jollies and LOLs. Thanks!

Give him the armband

He has great / terrible hair

I’ve seen him shout at other players.

Enthusiastic about this change as a fan as well…. Hopefully it translates to change in our trophy cabinet and league position come the seasons’ endings

Let’s not get in over ourselves. The new system will have to take some getting used to. It will / might take a few games in the league for the players to master the new techniques. But hopefully, at the end, we’ll have cause to take special digs at Manchester shitty and the rest of the money bags

I think you can see the work they’re putting in by the way the players look – all of them look buff AF, even Rob Holding is hench!

And you he is better than Cannavaro!

Nice to a have a gaffer with great appreciation for tactical work. Pressing effectively protects our defensive line & makes our offence more deadly.
Intensity going into games was one of our biggest problems over the last 2/3 seasons – great to see that’s been addressed.

Might just be me, but I’ve noticed a definite push from the club to showcase videos of the tactical side and intensity to the training sessions under Emery. I guess it’s to hammer home the fact this really is a new era and that concerns from past seasons have been addressed…

It’s all connected.
The club want to win the fans back and build atmosphere again. Not only does it change the atmosphere to the players and improve performance, but it also makes it easier for them to sell those corporate tickets, which must’ve become increasingly hard to do the last few years.

It is working for me. Was so bored of the last 10 years. Bring on the new ideas

It shows in the pics of the team. Bellerin has really leaned out, and Cech looks like the Incredible Hulk….

Watch out for that lanky fella in orange neon Bellers. He’s a sneaky fecker…

I don’t see much change in tactics.

BUT likely emery is using familiar format to better assess players on hand. He doesn’t have all the pieces of the jigsaw to make radical changes yet.

Good to see training intensity on the increase.

We don’t necessarily have to do new things. Wenger and company were already attempting to high press etc.

What we need to do is implement them better and sustain the effort.

That’s where the Devil is in the details.

Things would not change if we continue to see certain players as ‘ sacred’ just because they earn undeservedly, 350k per week. The inclusion in teamA has to be on merit. As such my teamA are: 1.Monreal, chambers, Holden and Bellerin if he works on his indiscipline. I do not see why the error prone Mustafi should get ahead of the two above or outrightly start Socratis who looks a bit bamboozled at the quick movements of balls around him. 2. Torreira, owing to his display for Uruguay; Guendouzhi, Xhaka.3. Nketia, wide left; Smith, wide right, then, Auba. I am… Read more »

So to sum up, you don’t think the new training regime and change to the tactics of our basic game will lead to any improvement in any of the Arsenal players you don’t like.

Forewarning: This is not directed at anyone in particular, but a few posts just pushed me over the line. No offense meant, so apologies in advance to anyone if they are. ======== An exciting, historic summer at Arsenal. New players, new coach, new methods and a new dawn for us all. This genuinely excites and the new campaign cannot start soon enough. With barely two weeks to the start, however, here we already have it: the old “ozil is lazy” trope. This is demonstrably false. He regularly covered more ground than any other arsenal player last season. His demeanor is… Read more »