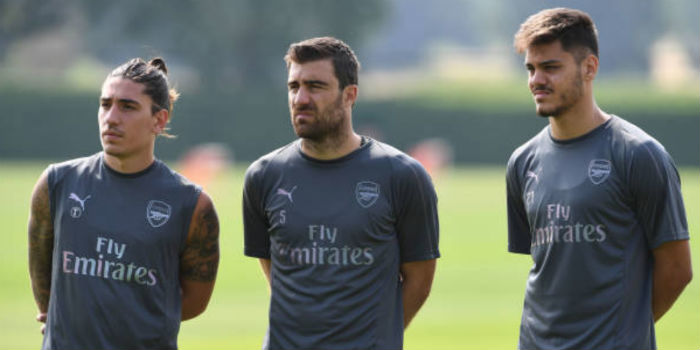 Arsenal new boy Sokratis says he’ll take it upon himself to help compatriot Konstantinos Mavropanos to settle at the Emirates as he knows full well how difficult it is to swap the comfort of home for the challenge of life abroad at a young age.

Sokratis – or Big Papa as we like to call him – was signed by Serie A side Genoa when he was only 20-years-old, the same age as Mavropanos when he arrived from PAS Giannina in January.

While the younger of the two centre backs has already experienced life in the Premier League, the elder statesman, recently signed from Borussia Dortmund, still feels a responsibility to lead the way, even though he too is only just finding his feet in London.

“I think this is my work and the work of the other guys with experience, to help the young guys,” Sokratis told Arsenal Player.

“From the first day, I will do everything so that the young guys feel like they have been here for a lot of years.

“[Dinos and I] spoke two or three times on the telephone, and also when he came here. I said to him that it’s OK, Arsenal is one of the big teams but he has to be happy and needs to put in a lot of work.

“I also saw some games. He improved a lot and I think that if he improves again in the next year, he can be one of the best defenders.

“The first year is difficult because it also depends if you speak the language or not. Now I’m here I also have to help him to be more calm, more easy, more friendly here with the other guys. I think we can have one good relationship together, we can be friends.”

Sokratis and Dinos were paired together in the 8-0 win over Boreham Wood at the weekend and also got minutes against Crawley Town in yesterday’s 9-0 behind-closed-doors win at London Colney. No doubt, we’ll get the chance to see the duo strut their stuff together in Singapore next week as well.

His chant should be to the tune of Big Poppa by Biggie smalls.

He’s gonna love it when we call him Big Poppa.

IM BEGGING YOU, LETS DO IT IN THE GAMES

yeah, let’s not have a song with the N word in it. We’re a classy club.

One of the most ridiculous comments I’ve ever seen on here. Your name is apt.

Not sure if that’s really on the cards tbh

Why aren’t we going with Socky P? After all, Blogs and James created it! Plus my father in law Socrates, went by Soc and I’m hoping that having a guy named Soc in the squad will make my wife like football. Yeah, I know it’s a stretch.

Socky P sounds like the description of what your pee would taste/smell like if you drank/ate a shitton of socks.

Also the nickname is already taken by the wimpy boy who got it from the schoolyard bully in the 90’s kid flick that never made it to a cinema near you.

The size of Petr Cech in that picture! Drumming or gym all summer long

I’m excited about Mavropanos. He seems like he’s a strong lad who will take no guff. Strong for a youngan

That headline is filthy. The person who wrote it should be fired. Then promoted to president.

I kind of love that we have two Greek defenders, it’s like the movie 300. This is ARSENAL (and then Big Papa kicks Jose in the gut – and he fall down to a certain death)