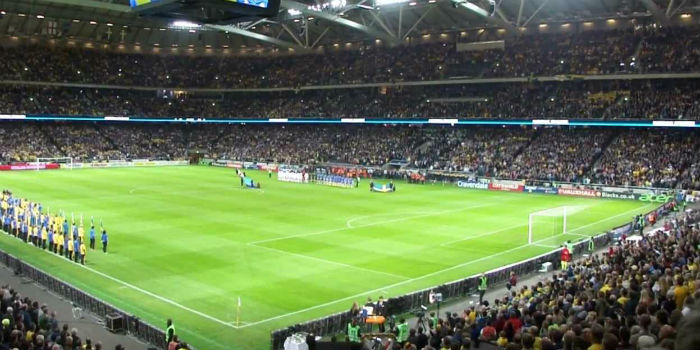 Arsenal were due to play Sevilla in a friendly in Stockholm on August 4th, a game that looked like it might not go ahead due to wranglings about the scheduling of the Spanish Super Cup.

However, those issues appeared to have been sorted satisfactorily – at least in terms of the game in Sweden going ahead – but it’s now been revealed the La Liga side will not be playing, and the Gunners will face Lazio instead at the Friends Arena.

It’s not clear just yet as to why Sevilla won’t be playing, and at this moment in time there’s nothing on their official website or Twitter account to explain the change.

This game, coming three days after Unai Emery’s side meet Chelsea in Dublin, will be the final warm up game before we open our Premier League campaign against champions Man City at the Emirates (maybe we want to play a team in light blue).

Still, for the Arsenal fans in Sweden it’s a chance to see the team up close and personal, and Emery will take his team to Singapore next week for games against our Europa League semi-final opponents Atletico Madrid and Qatari side PSG.

Delicious banter from the News Hound

What’s controversial about that? They are literally owned and funded by the State of Qatar. They’re Qatari.

So what? If the said family is part of the ruling brigade in Qatar, so are crony capitalists in US.

As if the light blue line wasn’t enough. Extra lashings of banter!

When are players leaving for singapore?

If PSG are a Qatari side, then Arsenal is a Yankee side.

Arsenal may have an American majority shareholder, but we pay our own way. Kronke, as far as I’m aware, hasn’t put a cent into Arsenal.

PSG, on the other hand, are owned and funded by Qatar, and were punished a few years back for violating FFP.

Sevilla have seen what we’ve done to the likes of giants like Boreham and Crawley and decided they’ll have none of that!

Let’s humiliate Lazio. I want some of their fans that make me want to call them Nazio very unhappy.

Live in Stockholm and bought tickets the moment they went on sale, so thrilled that the game is still on!

You also get a chance to watch that mobile Immobile striker of theirs.

I live in södertälje and this will be my first time watching my beloved Arsenal for the first time! Im buzzing!

Can only watch them for the first time once. I know it’s the excitement though.

One of the words in your post I think I’m having trouble pronouncing….

Emery is packing in the pre-season “friendlies”.

This is a good thing surely for him to both assess the squad and start drilling them to take care of those pesky details we often glossed over with Wenger’s more interpretive approach.

So this is where we tap up Milinkovic-Savic. Everytime one of our players is running rings around him, they can whisper in his ears about how awesome we are. Maybe negotiate his whole contract in that fashion.