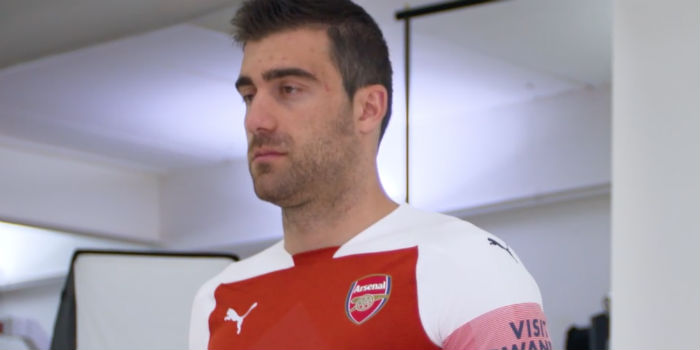 Arsenal have confirmed the signing of Greece international Sokratis Papastathopoulos from Borussia Dortmund.

The centre-back had one year left on his contract and moves to the Emirates for a fee in the region of £16 million. He will wear the number 5 shirt.

Sokratis started his career in 2005 with AEK Athens and has since played for Genoa, AC Milan and Werder Bremen. He was signed by Dortmund in 2013 and went on to make over 130 appearances at the Westfalenstadion.

Working to a relatively slim budget, the Gunners have already recruited veteran Swiss defender Stephan Lichtsteiner on a free from Juventus and keeper Bernd Leno from Bayer Leverkusen.

Did not see that one coming.

Sensing some sarcasm, but on the contrary, isn’t it nice we’re linked with a player and we actually see it thru? Kinda enjoying it for once.

Should note: I’m not disapproving – he looks like an absolute bastard. Bring it.

Isnt he 29 until…?
Also today’s budgets means it equals out to about 5m on average during wengers 2 decades

What kind of sorcery is this?

That is his happy face

He looks like he was out all night on a bender and rushed to the training ground for the pic.

Wow..one of the better unveiling video that.Clearly we are buying for here and now.No problem with that,hopefully he will have the same impact on Holding,mavro that we expect Lichtsteiner to have on Hector.Now onto Torreira and that’s most of the main holes plugged! #COYFG

They’ve had plenty of time to make it..

What are you moaning about?

Don’t bother, I’ll show myself out..

WTF where did that come from, totally out of left field etc etc

Welcome to the revolution Sokratis

new manager, new CB, new RB, new GK, possibly a couple new midfielders. no idea how next season will go but for the first time in years there’s change – something truly new. I’m so excited for the new season. #COYG

They’ve already assigned him a squad number (#5). Interesting that the same can’t be said for Leno yet.

That is an interesting point!

Maybe the Leno signing was a hoax

Or maybe the club are open to Cech leaving this summer

Welcome to the Arsenal, Sokratis.

Pretty happy with this, we needed some experience with Koscielny’s injury, £16mill seems like a reasonable price… and like Lichtsteiner and Leno he already speaks fluent English.

Reasonable price? Could have got Evans for 3mill and he speaks fluent english as well

“The unknown future rolls toward us. I face it, for the first time, with a sense of hope. Because if a Head Coach, an Emery, can learn the value of early transfer purchases, maybe we can too.” – Sarah Connor.

What a surprise signing; I never would have guessed we were after him at all!
Such a well kept secret… ?

‪Imagine playing right wing against Arsenal next season and you look up & you see Kolasinac & Sokratis playing against you. Love it.‬

Christ, what does he look like when he’s had bad news? Expression of a pallbearer

Although he can stare like that at the opposition all day long if he likes!

this made me laugh a lot, thanks

But first welcome to Sokratis.
16m seems a bit pricey but it’s the
market these days and if he gives us
3 good seasons it’s a good deal

One good season will mean top four, the champions league money will cover his cost. I doubt this new arsenal will keep players until their contracts expire when the quality drops so all is well

The fans wanted the board to sign a big name and we’ve certainly got that!

If Sokratis goes with his last name on the back of the shirt, we are going to have to break out the Oxlade-Chamberlain Memorial Font…

I finally did it guys!

No you didn’t. Keep trying tho

We are fucking bossing this window

Like the Lewis Ambrose review of Sokratis. Makes me think that purchase of a player like Torreira infront of Sokratis is even more important. Someone who can receive the ball under pressure and still able to redistribute.

The youtube videos of Torreira show him to be a cross between Arteta’s strength and shielding, and Cazorla’s two footed dribbling and ability to pass forward.

Papa looks like he loves having strikers for breakfast. Love it!

I hope we can integrate better than Everton

A transfer window where we actually address the defence? What is this!

I’m enjoying this off-season. While we still need to see how the team comes together, it’s nice to have transfers working in what feels like a proper and timely manner.

In today’s market, 16m for a player of Sokratis status is a steal. He played in the highest level (Milan, Borussia etc) and he has 79 caps for Greece. Our timing was perfect because he had only 1 year left on his contract.

Yet another ex Dortmund has been who has seen better days. Uninspired. Even if we were to load on an older player to cover Koscielny, there should be better options. He has had an average season, looks overweight and looks pastsellbydate. Mslintat cashing in on old contacts again at our expense. BUT not that it matters to some fans who have the wool easily pulled over their eyes bc they like to see this as reinvention. Thus far we look like an average slightly above mid-table squad. PEA aside (maybe Torreiro) none of the Mslintat era signings would be anywhere… Read more »

How much did Wenger buy Koscielny for? (even if adjusted for inflation, still worth the extra dosh)

This guy is old and fat.

Then go to the facilities of the Club and tell them how can you do better than Mislintat. I’ll wait

This is mpressive character acting by Jake Gyllenhaal!