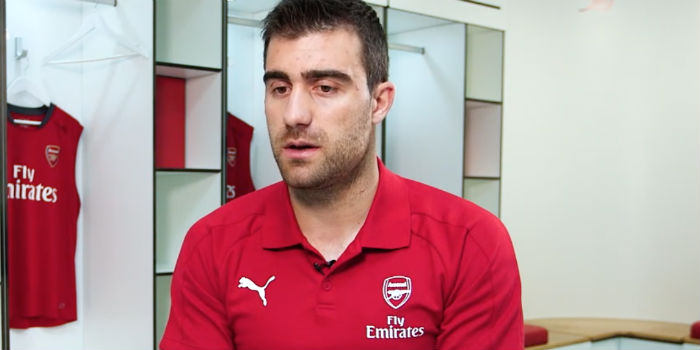 New Arsenal signing Sokratis Papastathopoulos says moving to the Emirates is ‘a beautiful moment’ and revealed that former Borussia Dortmund teammates Henrikh Mkhitaryan and Pierre-Emerick Aubameyang called him many times in the build-up to his move.

The Greece international has become a Gunner in a deal worth around £16 million and is looking forward to joining forces with players he knows well from the Westfalenstadion.

“I feel very good,” he told the club’s website at London Colney.

“It’s my first day here, everything is special. It’s a beautiful moment and I’m very happy that I will be here for the next years.

“Arsenal is one of the three biggest teams in the Premier League and one very big club. It has a lot of fans and a very big history.

“Like I said before, I’m very happy that for the next years I will be here to help the team.

“I spoke [to Mkhitaryan and Aubameyang] a lot [of] times. They said to me the best things about this club, that it is one big family and of course they also called me not every day but a lot of times telling me to come here.

It’s a little bit [strange to play with them again] but it’s also very beautiful that I’ve come to one team but I also have two players who I was together with for a lot of years. I know them both very well and I’m very happy.”

Sokratis also touched on his no-nonsense attitude towards defending, something Arsenal fans will no doubt be looking forward to seeing in the coming months.

“I’m a normal defender who likes to defend,” he explained.

“I like that my team doesn’t [concede] goals and I like the zero in the defence of course. I will do everything to help achieve these goals.

“I think that a defender first has to defend, to protect the goal, and then after if he can help in front a little bit for the game, then it’s good. But first of all, he has to defend.”

Welcome Sokratis, may you win as many titles with us as there are letters in your ridiculously difficult-to-spell surname.

He sounds a little bit like Arsene! Love it

Can just imagine Arsene saying “He is a normal defender who likes to defend” with his wry smile.

Kocielny & Mustafi keep going further up whenever there is a set piece and often caught on the break especially with a team like united for the past few seasons, doesn’t sound like Arsene to me.

Welcome to The Arsenal.

Get in! (but not in the goal with Sokratis about).

he’s not a bad one but just considering the age

People keep knocking the age of Sokratis and Lichtsteiner. Ive actually considered them both shrewd signings. We’ve been begging for leadership and vocal leadership at that. These two are those guys.

Honestly, I haven’t been to pleased with Raul until this summer. He’s filled the holes of GK, backup RB, CDM (hopefully!), and CB all while adding leadership. We can’t ask for much more as fans…… but I will.

To be fair matey, Raul wasn’t officially with is until February I think so there’s really not a lot he could do publicly that we know of.

That being said I agree about new fresh leadership, it’ll be good to get it in as many areas of the pitch as possible.

Still not good enough. Wenger got Viera before he joined. 😉

We had enough with buying for the future talents that normally end up not good enough for Arsenal like Joel Campbell to name one of many. We need immediate solution which Emery is trying to do right now. We still have Rob, Mavro, Chambers for the future.

But seriously, you have to sign some experience with Mert and Kos out.

He’s the same age as Aubamayeng give or take. Pretty sure no one was upset when we signed him because of his age…

At 29, Sokratis is without a doubt coming to the end of his peak but he is also a solid short-term option that looks capable of putting in flawless performances for the next 3 to 4 seasons.

And with a sizable amount of European football under his belt, his experience on all fronts will be useful to us as we try to shore up our defensive department.

If he helps us win the league within those 3 seasons then it is an absolute bargain.

Cracking start, ‘one of the three biggest teams in in the premier league’. Obviously discarding the spuds and chavs, top man.

I assumed he meant United and…Liverpool maybe? Definitely not another London club

Up the Arse
Reply to  'Murica

I don’t even think many Chelsea, City and Shit fans would claim to be a “bigger club” than Arsenal. It’s a well known equation; history + (international fannbase x tropies) x Tottenham are shit = 3rd biggest club.

Looking forward to seeing a Mavropapapapaapastathopoulos combination at the back. Which of course will be the daddy of all centre back combinations in the Premiership.

what I like about him is he is an an old school defender; not hesitant to launch tackles over tackles, committing tons of professional and unprofessional fouls in the process. He’s a decent dribbler of the ball for a rough tackling defender, which means that he’s able to carry the ball out of the back whenever necessary.

Blogs, off topic, but I often find that Google ads cover bits of article text when reading on phone. Normally a line or so below the ad.
I don’t know if this is an issue for others… Quick poll: Thumbs up if it is

While we’re off topic. Is that More Stories pop-up really necessary? A bit irritating to keep closing it.

That’s going to be one expensive shirt…

The three biggest teams of the Premier League

Ugh, dont give Mourinho any credit. It makes me sad.

He has this look on his face, like WTF have I done, hahahaa. No really, he’ll be great, go get em bud! Up the Gunz.

Most syllables in an Arsenal player ever?

Up the Arse
Reply to  No Longer Laughing Stock

So/kra/tis Pa/pas/ta/tho/pou/los – 9 is a high number I think it’s hard to beat.

Blogs – next week you and James can take this on further.

This Sven Mislintat fella. This guy is now making all the right decisions which us computer game Football managers have been calling out for so long.

I’m a bit pissed #what

our greek wall is ready

Wonder what the odds on him getting most red cards in a season, assuming he is a regular – is Paddy’s record in danger?

We’re getting well organised now…bloody hell can’t wait for the season to start.

News Hound, to achieve your hope Papa will have to win every single title with us till he’s 46.

The 12th Pin.
Reply to  TOGooner

If he wins the league, one in europe, and the two cups, each year then he’ll only need to get to 34!

santori
Reply to  The 12th Pin.

Plenty of better ‘older’ defenders we could have taken but Mslintat has his own axe to grind.

OTOH of course, he only has to be better marginally than Mustafi (and for that matter any of Chambers, Mavropanos or Holding).

But really this is an average signing and a poor stop gap at best to cover Koscielny.

Cech out my lazy arsenal pun

How did he pass the drug test? Look at him! He’s munted!

Not great. Hope he can add experience but doesn’t look like a good signing in long term. Pretty average club now if you ask the neutral. Emery aside and maybe PEA (poor timing on signing) rest of Mslintat signings have been poor. We did not improve with Mhkitaryan signed (in fact we got marginally worse). defense was not addressed nor wide position. Lichsteiner is at best a security measure. Wasn’t priority since we already had AMN who could have been shifted to his natural side. This pastsellbydate player hopefully surprises me but has had an average season, looks overweight and… Read more »

Couldn’t you have combined these 6 comments all saying the same thing into one uber-comment instead? It would have saved everybody a lot of clicks…

With Mslintat’s signings we have the feel of a mid table team now.

very few Arsenal players he has signed (bar maybe PEA) would have even been on the radar of any of the continent’s top clubs.

…truth hurts but the level of invention some fans undertake to convince themselves there’s some sort of positive reinvention going on is frankly laughable.

Chiefly I’m hoping Emery can make some sense of these signings and make it work but he can only do so much with what he is given.

The allure for Arsenal is fast fading. We are no longer at the level of Chelsea, United, City or even Spurs and Liverpool.

On the continent, Atheltico is more exciting.

I’m not sure I share many Arsenal fan sentiments that we are seeing positive change.

Emery and PEA have been good appointments.

The rest uninspired at best if not predicated by convenient links to Dortmund by Mslintat first and foremost above what we really need in quality.

Sorry have to say it as unpopular as it may be.

We aren’t going to beat City to the title.. But we have what it takes to be top four again.. I think our signings are good enough to achieve that with proper coaching.

Excited for the new season. We have goals in us without a doubt. If we can sure up this defence then we can give it a crack. Will be interesting where we sit after the first two games.

Also, strange how quickly you can get deals done when you actually start the process before the season actually kicks off… Even in a world cup year. Puts into perspective just how ludicrous we always left getting our signings done until the last second was.

welcome to the big family PAPA!

lets get the lucas torriera deal done on time