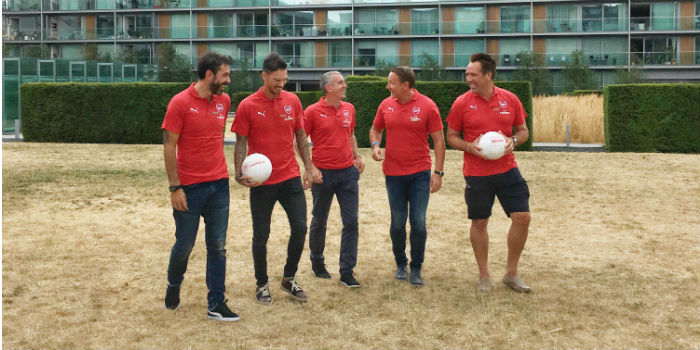 There has been plenty of focus on Arsenal’s preparation for the season under new coach Unai Emery. Arsenal Media have been granted greater access to film sessions than under previous manager Arsene Wenger. The players are also undergoing two training sessions per day, which has been hailed as a new development.

But not if you ask Legendary Arsenal goalkeeper David Seaman. The Yorkshireman, who played for the club from 1990 – 2003, insists that double sessions were a feature of life for him during at Colney. “Pre-season was always double sessions, that was quite normal,” Seaman told Arseblog News on the patch of grass he used to command with such authority at Highbury.

“With George there was a lot of long distance running involved, we used to go over to Trent Park and run up the hills there. With Arsene it was different, runs were timed and there was a lot more sprinting and body and core work. I’m sure Emery is more similar to Arsene than George.

“You look at players nowadays and they are all super fit, so whatever they’re doing now works. It’s the coaching side I’m more interested in, how is he going to get us to play, if he is going to make massive changes. I don’t think he’ll make wholesale changes because he doesn’t need to, he’ll just put his own stamp on things and hopefully it will be in a positive way.”

French duo Robert Pires and Jeremie Aliadiere say double sessions were routine during pre-season under Wenger, “It’s definitely normal”, nods Pires. “I’ve met the new manager, he loves to work. When you’ve rested for a month you need direction, the body is very important. Double sessions are normal.” Aliaidere agrees, “They set you up for the season. You have a good preparation for six weeks, obviously it’s hard, but when you get to the season you feel prepared, you feel fresh. Everybody goes through that.”

Long distance travel has also become a feature of pre-season for the modern Arsenal player, with the squad flying to Singapore next week. Fellow Gunners legend Robert Pires insists this is not an issue, “It’s the modern game. Football is a business. Arsenal is a big club and a big brand, if they have a possibility to go to America or somewhere [they should take it]…I know next week, they go to Singapore, it’s good for business.”

Ex-Arsenal striker Jeremie Aliadiere chips in, “To be honest, all the teams do it these days. It’s not like you’re the only team and then you can complain that the team travelled too much. All the teams go to America, Asia or Australia. It’s part of the modern game.” Pires also insists that a busy fixture schedule is not a problem- quite the opposite.

Jeremie, Robert and David will be playing for the Arsenal Legends when they take on their Real Madrid counterparts at the Emirates on 8 September. All proceeds from the match will help The Arsenal Foundation and Save The Children provide specially-devised coaching programmes to help build the physical and mental resilience of vulnerable children in the slum communities of Indonesia and Syrian refugee children in Jordan.

Tickets for the Legends showdown are still available and available from £20 and you can Book tickets here.

It’ll be interesting to see how things have changed from Arsene to Unia. Obviously the double sessions are no different.

Tactics and defensive discipline you’d hope would be very different but let’s see what comes out.

Why is Ali talking as if he’s uses to playing every 3-4 days for us lol.

You have poor reading comprehension. It is clearly Pires talking and not Aliadiere.

Double sessions are standard in all clubs during pre season.
Even if the morning is conditioning based, evening/second session is usually gym-based. Heck it’s like that in-season too.

Semi-professional and even amateur clubs have double sessions in the pre-season for God’s sake. That ex-players need to talk about this just shows the state and lack of knowledge of WOB.

We should keep Juan Carlos Carcedo registered , just in case ?
The guy looks lively enough and psycho enough to be our midfield enforcer. Also likes to point around and shout , Mesut will feel much more comfortable on the pitch