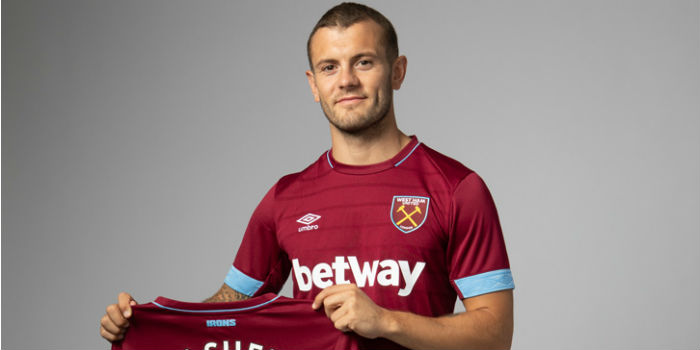 Jack Wilshere says he has nothing but respect for Unai Emery despite a candid discussion with the Spaniard leading to his Arsenal exit.

The 26-year-old midfielder had been offered a contract extension by the Gunners, albeit on highly incentivised terms, but decided to start a new chapter of his career at West Ham United when it became clear that playing time at the Emirates was far from guaranteed; something that Emery himself touched on last week.

Speaking to the Mirror, Wilshere also explained that Arsene Wenger’s departure played a part in his decision to call time on his 17-year association with the club.

“I have nothing but respect for [Emery],” said Wilshere. “He was honest with me and I am sure it would have been a very difficult conversation to have with me as he had only been in the job for a week.

“We had a meeting and he told me that I was not going to play as much as I wanted.

“So that was difficult for him and I thank him for that. He could have said: ‘Yes you are going to play’,

“I’d have signed a contract and stayed and in a year’s time they’d have had to sell me. So he was really honest with me and I thank him for that.

“It was a decision based purely on football. The contract was still there. After my conversation with the new manager, he made it clear I could still stay.

“But I felt it was the right time. I knew they were going to bring players in. A new manager, I do not really know him. It was different if Arsene was there.

“The year before when Arsene said to me that I could leave, I knew Arsene and I knew he had trust in me and I knew he would play me if I performed well in training. And he did. This year was different, it was the right time.”

Wilshere also underlined that his ties with Arsenal will remain strong and has backed the club to go from strength to strength courtesy of this summer’s additions.

“I do care. I still have respect for Arsenal and love for the club.

“I hope they do well and start challenging again where they belong. They didn’t need too many signings as going forward they were always dangerous last season.

“They have great players going forward, they can always create opportunities. It was not the defence. But defensively as a team we weren’t great. We had to tighten up as team.

“They have brought in a centre half and a midfielder which are good additions. Everyone needs a strong squad and if you look at City and United they have a great squad. So if you want to be challenging you need those players.”

We also do care about you, Jack. I hope you have a stellar season, but not while playing against us.

wouldn’t mind him having a stellar game against us ,like score 1 and a assist while west ham lose to lacazette hatrick.

I don’t think I could ever not love Jack, he really is one of our own and always gave 100% every time he represented our club. Nothing but love and respect for Super Jack. Absolutely hate the hammers but I genuinely wish all the best for Wilshere and hope he can stay injury free.

Because of Jack and Cazorla, I now better accept players putting their own interests first. I use the word mercenary too easily but things can go wrong for them easily as well.

Who cares about a quitter?

What does he think of tottenham?

and what does he think of shit?

They’re one and the same.

He’s matured so much in the last couple of years. Big fan of his as a person, I hope he does well in his future. The lad was living all of our dreams, which unfortunately turned into a nightmare. Can’t wish any ill on him at all.

Yes, his recent maturity has been stark. A credit to him.

I thinks he signed ‘only’ a three year contract at WH, so if he really smashed it for 2 years I’d be well up for bringing him back for the August/September of his career. Although I fully acknowledge this is a purely hypothetical and romanticised point.

Shame to see him go. He had the natural talent to become a legend at the Grove. It’ll be interesting to see if the Hammers can keep him fit; if they can they may have got themselves a bargain. I hope the stories about Kingsley Coman are true. The one player we are missing now is a quality winger. For the first time in years I’m looking forward to the new season. If Emery is as good as we think then a top-four place should be easily obtained. But what I want to see more than anything this season is… Read more »

I don’t think a top four place is ever easily obtained. It’s hard to tell how this is going to go, which is exciting in itself. We know from Emery’s time at PSG and Sevilla that his teams are often high intensity pressing teams, which I’m looking forward to seeing. With Liverpool strengthening and City being ridiculously good last year, the league will be a tough ask. United could either improve or completely implode this season, depending on whether Mourinho has everything he wants, Chelsea are now a mystery again and Sp*rs have retained their manager who is the sole… Read more »

Chelsea will flop again. No preparation = no chance. From the owner to Hazard everything is a mess there at the moment. No time to fix things before the start of the season.

Maureen is a busted flush who doesn’t want to be at United. It wouldn’t surprise me if he deliberately screwed things up there so that he could take his money and run.

Spuds didn’t buy and will start the season badly with all their knackered WC players.

Liverpool and City will battle it out for the title.

We will finish either 3rd or 4th.

You are talking rubbish!

Hoping he sticks it to Spurs as West Ham are their bogey team.

I thought spurs’ bogey team was whoever they’re playing in any competition when they’re within sniffing distance of winning something important.

Good attitude? To thrive on challenges and show out on the pitch that you deserve game time? Best of luck Jack but this is lacking attitude for me

No.
Good attitude to understand and accept gay, regardless of playing time, the manager hasn’t made it clear he’s not not in his plans, but rather than make it personal, Jack accepted what would’ve been a very tough personal decision and rejection of his beloved club with grace and dignity.

That’s not quite a common trait. See Adam’s bitterness to the club as an example.

Andre Santos also accepted gays, which I thought was great of him.

This guy has matured a lot. So much class in his speech. One of the few arsenal players recently who put their heart into the game. I wish he hadn’t gone on loan to Bournemouth he may still have a future with us. Good luck to you Jack. I will always remember your goal against Norwich, your ding dong with Oliver Giroud(another hugely under appreciated player at arsenal). Stay fit and reach heights your talent demands(not just against my Arsenal though)

Arsenal through and through but injury issues likely the main problem.

Hope he can help the Hammers.

Meanwhile plenty of competition in midfield.

Torreira starts at DM but AMN will compete with Elneny likely for back up role.

Granit, Mhkitryan, Iwobi to play the link role with the rejuvenated The Jeff and Guendouzi auditioning for a stronger part. UP top Ozil and Ramsey in the hole.

A P
Reply to  Adi

I have no idea how you can come to that conclusion.

Me neither but hey ho!

Gereoma
Reply to  A P

Arsene pampered most of his players to the point of dishonesty. Wilshere was often lulled into a false sense of playing security. The dishonesty may have been fatherly, just like a father hides the true situation of his wrecked finances from his family. Arsene caused Arsenal all sorts of problems in his later years. For instance, Ramsy is prevaricating because he has set his eyes on Ozil’s contract which the latter did not deserve. He protected Ozil to a point of dishonesty as well. He was missing in big games, yet Arsene continually denied this fact. Ozil arriving at training… Read more »

Did Wenger pee in your porridge or something?

If Arsenal is that porridge, yes! How can we miss out on CL on two consecutive times. Are you not ashamed asking such an obvious question?

Arsenal through and through. While I still personally feel that his best option was staying with us and fighting for his place, I wish him all the best and hope he becomes a mega success at West Ham.

With Ox now out for most of next season and Alli’s relatively poor world cup, England have a massive hole in the middle of the park. A full season at WH should really see him cement his place in Southgate’s side, a player like him was sorely missed against Croatia.

Very sorry to see Jack go. , I believe he would have forced his way back in a very short time, because. He is sheer class, good luck Jack